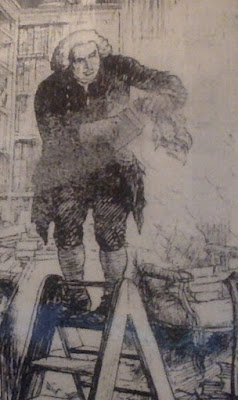 Samuel Johnson had a an attitude to books that often surprises people.

Not only was he a towering figure in literature, but much of his work was about literature. His earliest large project was reading and summarising a whole library for a catalogue, his dictionary was based on a wide and intense reading of literature, his other large works were an edition of Shakespeare’s plays and a collection of biographical and literary critiques of poets. Yet he had no respect for books as physical objects at all.

People who leant Johnson books complained that he spilled food on tea on it, visitors to his house were shocked by how he used books as coasters, doorstops and to prop up wobbling furniture. Even his way of reading, pulling the books open, cracking their spines and peering in (his eyesight never being great) was detrimental to them. Boswell reports that he once visited Johnson who was ‘dusting’ his books by vigorously banging them together. People did not like him borrowing their books, Garrick upset Johnson greatly by refusing to lend him his folio Shakespeares.

It does seem there was an element to Johnson who enjoyed being earthier than a man of his achievements should be, that he liked to be something other than an airy academic, that he felt grounded in his time as a Grub Street hack. There’s also the fact that he was raised in a bookshop, a failing bookshop at that. He boasted that he was one of few writers who also knew how to physically make a book as well as to write one. His understanding of how to bind a book may have led him to see them as tools. I think Johnson would have been very supportive of e-readers, he’d have been astonished at how much variety can be carried about and would have made very good use of the font-sizing ability. Whether he’d have looked after the device is another question.

More than that, Johnson didn’t read the way people do today. While people may have many books on the go, they expect to pick a book up and read it through. Johnson claimed to have not read any book all the way through, though I expect that was exaggeration - he must have read Shakespeare’s plays through to review them, and probably his three favourite works; Pilgrim’s Progress, Don Quixote and Robinson Crusoe. That said, Johnson seemed to read as a cow in a field, to dip in and out of different works, grazing as he went. He admitted many times to skipping pages, or putting books down which hadn’t grabbed his attention. In modern parlance, he was a huge DNFer.

For a man famous for books that take some strenuous physical wrangling (the dictionary is no light work) he preferred smaller books, declaring;

“Books, that you may carry to the fire, and hold readily in your hand, are the most useful after all." For a man famous for the seriousness of much of his work, he liked to while away the time reading tales of knights and derring-do.

Most importantly to his attitude to reading, is that a person should read what they feel like reading and when. He says this multiple times in multiple ways. The sentiment is found in his own writing and in numerous anecdotes by numerous people.

"What is read with delight is commonly retained, because pleasure always secures attention but the books which are consulted by occasional necessity, and perused with impatience, seldom leave any traces on the mind.” - Idler 74

For Johnson, the joy of a well stocked library was the means to supply him with the right kind of reading material for whichever mood he was in, which was how he read so much and so widely, because he essentially had every book within reach on the go all the time.

If Johnson was a cow in a huge pasture of reading, I am a squirrel. I hoard books, burying them away on my shelves before picking them out and savouring them one by one. For the past ten years or so, I’ve always finished what I’ve started - I think the last book I didn’t finish was Clarissa and know if I start it again, I shall finish.

Are either of these approaches better than the other? Probably not but the differences are interesting to note.

Email ThisBlogThis!Share to TwitterShare to FacebookShare to Pinterest
Labels: At Home With Samuel Johnson, Thoughts