I am in Rouen at the moment, having taking a month(ish) away to finish my eighteenth century blockbusting novel and then do a little sightseeing.

Unfortunately for all those eighteenth-century-philes out there, there hasn't been a lot of our favourite hundred years to look at, but I have had fun nonetheless. I have seen 13th century clockwork; stood to hear the bells ring from inside the belfry walked along a route of 15th century waterwheels, seen a few impressive churches and the final resting place of some Dukes of Normandy.

As for writers; I had a visit to Arras in rather better circumstances then when Cyrano de Bergerac visited (he was besieging it), I have visited Pierre Cornielle's place and today went to Flaubert's childhood home, which was also a hospital (because his dad was a doctor).

I'm halfway through (and enjoying) Marx's translation of Madame Bovary and have read Flaubert's Parrot by Julian Barnes, so I have a small idea about him and his work. What impressed me most was the medical part of the museum, mainly the funny or icky stuff that appealed to the eight year old inside.

Included in the museum are; an eighteenth century do-it-yourself enema stool, some badly stuffed severed heads, a toy guillotine, a stuffed parrot, a cuddly toy, a collection of fake used baby's nappies to aid the doctor in diagnosing from the poo and some lovely old books.

The cuddly toy is an eighteenth century forceps training doll, designed to help trainee doctors to safely navigate a baby out. It looks like this. 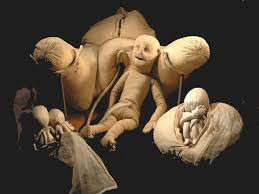 As for the writing, I have been making some good breakthroughs and this massive, complex, intertwined novel I am working on will be finished before the year is out...honest.

As for the book I am trying to sell, here are two videos about the processes I used to try and shape the piece from all the disparate elements and how I tried to get into the role of Eve Lewis.

Until next time... A Bientot.