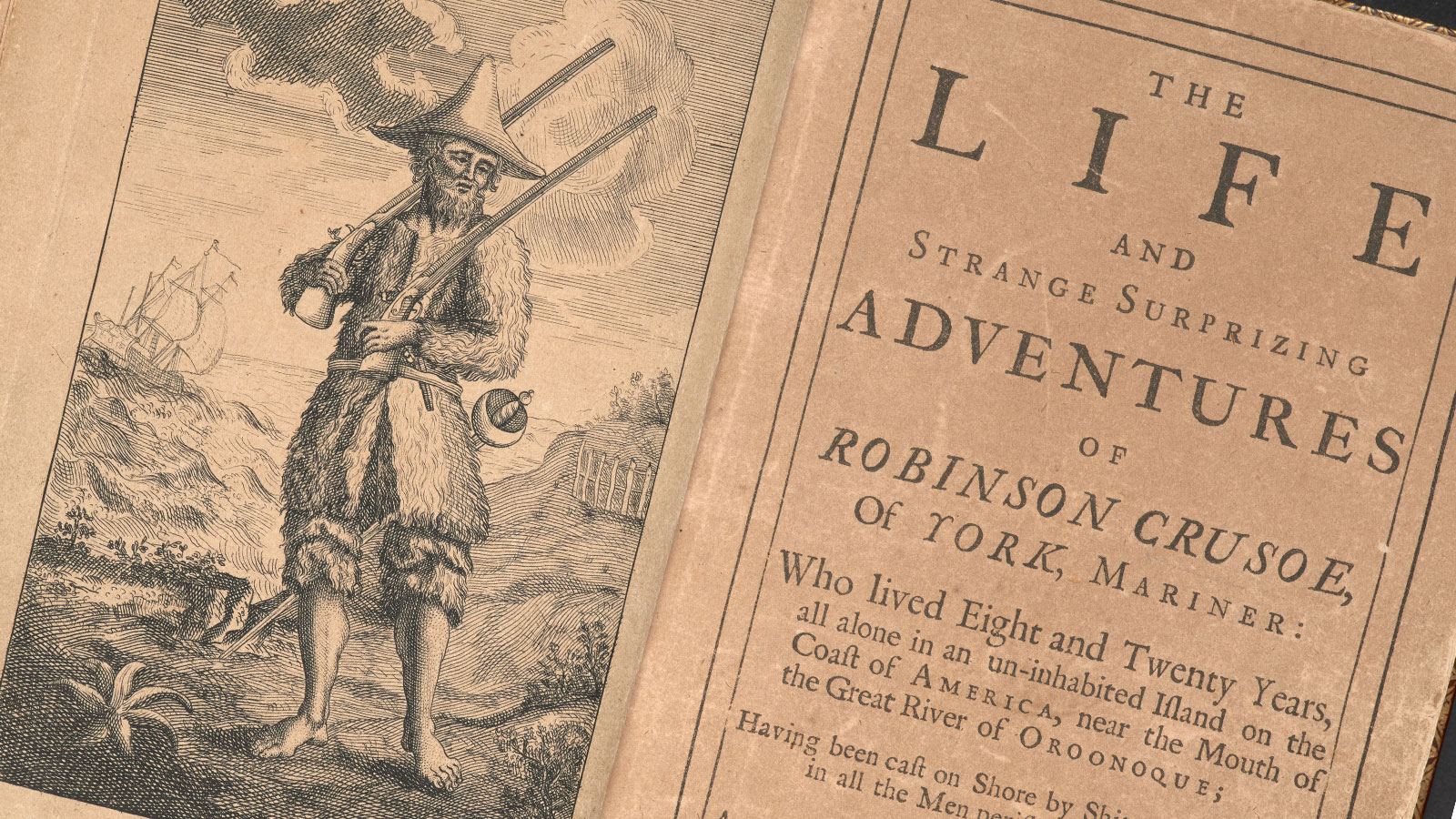 The Dr Johnson Reading Circle met to discuss ‘The Life and Strange Surprising Adventures of Robinson Crusoe, of York, Mariner’ a mere three-hundred years after it was published. Naturally, we pretended that this was on purpose and not happenstance at all. Often taught as the first English novel, it was one almost all of us ‘knew’ but almost none of us had actually read. Like ‘Treasure Island’ or ‘Sweeney Todd’, the situation and characters are imbedded in culture that there didn’t seem any reason to read it. Old copies were levered out of old bookcases, cracked open and… the reaction was very positive.

‘Why weren’t later eighteenth century novels this gripping’ was one comment readily agreed with. One of the things that makes ‘Robinson Crusoe’ different from other books in the century is the lack of pretensions or ‘showing off’. There is no needless Latin or Greek. Crusoe, despite his extended travels, is never compared to Odysseus - a notion that would have been inescapable for other writers. There is no romance in the landscape, everything on the island is described in its practicable terms, to be used and not enjoyed.

Nor are there any supernatural elements in the book, at one point Crusoe thinks he sees a demon in a cave but quickly realises it’s nothing but an old, dying goat. This constant grounding, the constant reaching for physical and practical reality, gives the story its texture and its power.

Even when the book touches on areas of religion, it deals with religion as a practical necessity. God is a companion as much as anything else. This means that even in the most religiously-minded parts of the book, it doesn’t feel didactic. As one member said, ‘this is because his religion doesn’t really affect him’, and in many ways it doesn’t, he doesn’t have the luxury for it.

There were disagreements about whether Robinson Crusoe had much of an ability to think or reflect. Early in the book, his constant need to be somewhere else, to be doing things, is partially what caused his situation in the first place. When he arrives on the island, he is still deep in the process of ‘doing’ things, of making plans, of gathering and growing his resources much as a merchant or plantation owner would at home. His faith is tied with his successes, his mind tied up with the processes of living and then living comfortably. For Crusoe, civilisation is a cooking pot to make stew and a loaf of bread, culture is the ability to make things to control and harness his environment.

It is the arrival of Friday, much later in the book then we expected, that prompts Crusoe to learn to think. In teaching Friday about European culture and religion that he thinks about them. They work together, with Friday asking difficult questions and prompting Crusoe to more complex answers. As such, the characters of Friday and Crusoe meet more equally than the commonly held notion of them as slave and master. It is Friday’s choice to serve Crusoe, if just to learn the secrets of gun and bread. However, it is not a completely even relationship and as the book moves to its climax and onto a small adventure across the alps, Friday is relegated to a bit part. We wondered if this was because of Defoe’s own prejudices against the character or the actions of a novelist unable to deal with multiple characters in a novel and having almost no examples of the form to guide him. (It is amazing to think that Defoe must be one of the few people to have written more novels than he read - rather like E.L James).

In learning to think, Crusoe comes to a form of relativism. Although, as a European, he feels his ways are better and feels a revulsion at the acts of cannibalism brought to the island by the natives, he feels he cannot kill them. Crusoe reasons that the natives of the area are created by God for his own reasons and it is not Crusoe’s place to interfere with them or harm them unless he is attacked himself. Crusoe also develops a primitive form of cognitive-behavioural-therapy, using notions of gratitude to re-enforce his mood and practical work to displace his loneliness. Despite his many set-backs and many mistakes, he is able to start again, achieve a little more than the time before and most importantly, to recognise those successes. It’s a lesson which we could all take into our non-desert-island lives.

The final part of the discussion revolved around the tone of the book and of Defoe himself. Particularly, does he have a sense of humour? There are many parts of the book where ‘Robinson Crusoe’ could be read as satirical, especially Crusoe’s delusions of grandeur as the Governor of his little island. He proudly declared his a benevolent monarchy where free expression of religion was allowed, even as the occupants consisted of himself and a herd of goats. Defoe’s own dedication to realism, to the solid and practical details of the story obscure any larger intentions of the work. I can only suggest readers look at the novel to decide for themselves. At the very least, they’ll have a good time with it.