On the the third floor of Samuel Johnson’s House in Gough Square in London, sits a large glass case and inside it is a cube of grey stone. This is a brick from the Great Wall of China and it was sent to the house because Johnson once expressed a wish to visit the wall, but being to old to go there, some of the wall came to him.

That wish was expressed in the section of Boswell’s Journal we discussed at the Dr Johnson House Bookclub this Wednesday. This was the first session of the third year and there was a mixture of old and new members fresh and ready to bat the text about a bit and see what we could get out of it.

Equality and hierarchy came up as they often do. Johnson’s view on people’s ‘place’ is such an uncertain, shifting topic, there’s always something to say about it. A firm anti-slaver but painfully certain that a king should be a king. It was probably best summed up by the member who said that Johnson seemed to highly respect individual freedom but expect that individual to act within a strict system.

We enjoyed Johnson debating with Mrs Knowles (and losing the odd point or two) and his review of Kedleston Hall as a perfect civic building if not exactly a house - more enjoyable was his tactful comment to the owner, that it sure looked expensive.

Johnson was in a playful mood in a lot of this section; whether it was limping about pretending to be Richard III (to show how easy acting is), clearing a blocked water feature of a dead cat, wishing he learned to play the fiddle and bemoaning the fact he failed to learn knitting or even planning the best cookbook ever written - he has an energy in this that Boswell doesn’t expect in him. When Johnson meets an old university friend, the friend feels old and Johnson keeps having to remind him what spring chickens they really are. He’s in one of his phases of temperance, declaring that he’ll go back to drinking when he’s old.

There’s a lot about friendship in this section. Dead friends are frequently remembered, Goldsmith is often brought up for both well and ill, and Boswell and Johnson’s friendship seems warmer then ever. Since travelling together, there seems to be a new closeness and although Johnson can still get angry, he’s always ready to apologise again and profess his love for Boswell. Bozzy has also mellowed, maybe it’s becoming a father, but he’s trying hard to get on with his own dad as he makes a relationship with his new son. The relationship between Johnson and Boswell is a full, rich and slightly strange one. Sometimes they are naughty schoolboys together, prodding dead cats, yet sometimes Johnson acts as father, sometimes they are serious adults together and discuss the deep things in life. We reflected that none of us knew of any really good books on the subject (so if anyone knows of any, drop a line).

We also reflected on how many of the conversations were like those we’ve had. Johnson reflects on old friendships, relives old japes and looks forward to new ones. They discuss death and ghosts, take the mickey out of each other, correct each other’s grammar (Johnson hated the word ‘prodigious’), bickered and generally did all the things that people comfortable in each other’s company do…. and pretty much what we were doing as well, chatting about Johnson and Boswell and company as if they were just old friends. 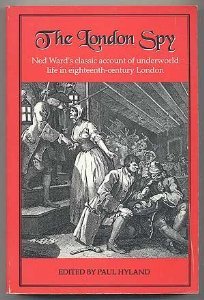 The London Spy appeared at the cusp of the eighteenth century and dealt with the shadower underside of London life.

It was written by Ned Ward, who had already begun something of a writing career, with hudibrastic verses about his disappointing search for an inheritance and a description of his trip to Jamaica  - fair to say, he didn’t like the place. After a similarly scathing description of New England (which he might not have been to), he decided to apply his style closer to home.

In The London Spy, Ned is represented as an innocent from the country who is led around its precincts and environs by a more streetwise friend, sampling the best of London culture, meeting various colourful locals and enjoying the unique skill of London Language. The two men hang around Billingsgate with the fishwives, spend time with cardsharps and wits, poke their heads into Newgate and Bridewell, and visit Bartholomew Fair.

What Ned Ward does best is to listen to people. He clearly has a joy in the way people speak, especially their saltier phrases. We learn of the river-custom where those rowing across the Thames shout insults and throw turds (or ‘sir-reverence’ as it is referred) at each other. We learn of old soldiers with legs ‘too thin to fit a stocks around’ with ‘turd-coloured’ moustaches where they sniff cheap snuff. In Bedlam there is a man who only spoke ‘in praise of bread and cheese. Bread was good with cheese and cheese was good with bread, and bread and cheese was good together.’ We meet a man in a pub with a nose, ‘as long as a rolling pin, and I am sure as big at the end as a football, beset with carbuncles and rubies’.

At his best, Ned Ward is rude, filthy and full of life, as this bravura piece of Thames river banter attests;

‘You couple of Treacherous Sons of Bridewell Bitches, who are Pimps to your own Mothers, Stallions to your Sisters, and Cock-Bawds to the rest of your Relations; Who were begot by Huffling, Spew’d up, and not Born; and Christen’d out of a Chamber-Pot; How dare you show your Ugly Faces upon the River of Thames, and Fright the Kings Swans from holding their heads above Water?” I hope I may talk as unpleasantly when the need arises.

Readers of eighteenth century history may often find little bits of Ned Ward popping up in textbooks and other works, often supplying a little bit of local colour but beware - he is writing to entertain. He may spy on the dark and dingy by-ways of London but to take what he says completely straight may be foolish. Things aren’t in The London Spy because they are true, but because they amuse Ned Ward.

Particularly amusing to him is anything to do with poo and bottoms. Much excrement is thrown during the course of the work (he gets five pages in Norman Inkpen’s Shit Jokes - a study of scatological Humour). There is also a sequence in The London Spy which things go up bottoms. I shall not play the censor but only say that those who want to find it can go look for it themselves.

Such energy doesn’t last forever though. The London Spy lasted eighteen editions at one a month and had really dropped in popularity in the last few months. It’s not hard to see why; the sharp and precise portraits of different people and parts of the city become a more general description of ‘a stockjobber’, ‘a beau’, often followed by a weak poem on the subject. It had become formulaic to the writer and dwindles away.

That didn’t stop it being a huge success, nor to be extremely influential including blatant copies (I have a ebook of The York Spy), finesses of his idea (from Tom Brown to possibly even The Spectator) and a 1966 reworking (The New London Spy).

Personally, I prefer Tom Brown’s take on the idea a little later in his Amusements Serious and Comical, calculated for the Meridian of London, Brown is a less energetic writer and his character sketches don’t feel as real but he has a greater skill with the pen to make it a more even work. That being said, this is a book that will amuse, shock and entertain for many of its pages and I recommend trying it out.

What about....The Vicar of Wakefield?

Here's the first of a series of short videos looking at classics that haven't ever really received the tv/film adaptations they deserve.

Email ThisBlogThis!Share to TwitterShare to FacebookShare to Pinterest
Labels: video

For my sins, I like listchallenges book lists.
If my dear reader hasn’t discovered this phenomenon, listchallenges are checklists created by users that other users tick off - I am particularly fond of the subsect of these lists that deal with books.
These lists have a number of things that completely irritate me; I am finger-gnawingly irritated whenever 1984 appears on each one, I love/hate marvelling at the sheer number of young-adult novels with vague one word titles and dreadful cover art, and I like seeing and remembering something I read years ago and forgot about.
There’s also the abuse of language, one of the list descriptions says, ‘The top 100 books I am still looking for to add to my to read list,’ which can be translated as, ‘I want to read these books’.
But the most annoying thing about listchallenges is the overwhelming sense of guilt. There are lists full of classic works where users are encouraged to compare themselves to each other and to feel bad about not having read the requisite works.
Which completely misunderstands the point of classic works.
They are classic because they have struck readers as particularly skilled works and have maintained that over the decades and centuries. They are classics because they are good. A person shouldn’t feel guilty for not reading them, or read them to assuage that guilt but should read them because they are enjoyable, well-written and long-lasting works that have enthralled people for years.
I started this blog because I had all these thoughts about the eighteenth century literature I was reading and nowhere to express it. Now, I go to the Dr Johnson Reading Circle and I get a chance to talk about these books I love and my friends haven’t read, but I still write the blog. My point is never that a person is better for reading classic works, or that knowledge of the eighteenth century is self improving - it’s a chance for me to squee, in full fanboy style about those things I love. On a rare occasion that I feel the eighteenth century has improved me, I like to share but on the many occasions it has entertained, or even bored - I share that too.
So, listchallenges can be a fun way to track, explore and share pleasure for books, but the notion that it should guilt people into reading the same stuff is nonsense.

Since 2010, I have been keeping a reading diary, and with a little time on my hands I decided to make a list of the books I have read since then. These are the books that have wormed their way into my head… enjoy.

Email ThisBlogThis!Share to TwitterShare to FacebookShare to Pinterest
Labels: Something Else, Something Silly, Thoughts
Newer Posts Older Posts Home
Subscribe to: Posts (Atom)