Review: ‘The Fictions of Romantick Chivalry’ by Eithne Henson

‘The Fictions of Romantick Chivalry’ is one of those books I expect few to have read but containing ideas that I think are definitely worth trying to ‘get out there’ in my own little way. This book is a little special to me, having been bought at the bookshop in the front room of Breadmarket Street, Sammy Johnson’s birthplace and the room Michael Johnson had his bookshop.

This book took me a remarkably long time to read, which is not fair because it is a well-written and thought-out discussion combining two of my favourite things; Samuel Johnson and over-the-top stories about knights, castles, enchantments and such. The main conceit of the book is that Samuel Johnson was far more influenced by silly stories of quests then we (or even he) realised.

It’s important to note that the long running peninsular-type romances like Orlando Inamorato/Furioso, Amadis du Gaul or Bevis of Southampton were looked down as daft, childish books full of fancy and invention but lacking in any real meat - not too dissimilar to a book-snobs view of an airport thriller. While books like The Faerie Queen and Don Quixote were regarded as slightly more literary versions of the same thing (say a Silence of the Lambs to the newest Dean Koontz), general eighteenth century prejudice was snooty to the whole genre.

Johnson was already a little more forgiving than many of his peers, declaring this sort of work to be the kind of thing to really grab a young or neophyte reader with their variety and fun (and annoying Hester Thrale by not accepting that any other kind of book might be attractive for children). He declared in a number of Rambler essays that such works were made to grow out of. Indeed, he declared that such books, as well as the often fantastical Shakespeare were works of a younger, more infantile age and suited only for young children.

This, however, did not stop Johnson knocking back the odd ‘romantick’ work when he could, or from frequently using allusions and ideas in his speech and writing - to the extent that Eithne Henson argues they radically shaped his world view. 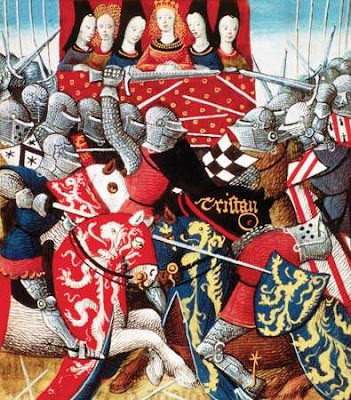 There are a great many of these ‘romantick’ writers quoted within the dictionary - many of them slightly misquoted, showing that they were from Johnson’s memory. Because the meanings of a word are displayed in Johnson’s dictionary by chronology rather than most-common meaning, it shows how many seemingly innocuous words originally have a chivalric meaning. For example, I was not aware that an avenue was originally a military term for the weak lines of attack factored into a fortress or castle.

Henson says that  Johnson uses these words in other works like The Rambler or Rasselas, with half an eye on the deeply buried etymological metaphors in them - meaning that some rather plain looking sentences actually contain vibrant metaphorical meanings, many of them linking to the dangers of the chivalric landscape or the arts of war/chivalry.

Another argument she gives towards this reading are the many references in his work to features of a ‘romantick’ landscape. His discussion of fame or morality are often riddled with images of dank dungeons, caves, mountains or the many allurements of enchantment - one of the most feared being the overwrought imagination that can lead to despair. The frequency of these images show how much his imagination was engaged by them and how much he saw himself and the travails of his life as that of a knight errant on his journey. Sometimes viewing himself as a comically inappropriate ‘Cervantean’ knight and other times as a proper one - it is interesting that his view of Quixote is one of the earliest sympathetic readings that exist.

Johnson also showed the influence of this fiction on him in the way he treats Shakespeare. He is consistently drawn to the stranger, least ordered narratives and although he regarded Shakey as uncouth and messy, it is that variety and forward movement that he most appreciates and responds to. (She also talks about how, ‘Johnson’s imagination responds to Shakespeare, as to all literature, with a far greater intensity than is normal.’ Something I would like to return to another time.)

Finally, Johnson’s ‘romantick’ spirit is revealed when he gets the chance to live it a little in his trip to Scotland. His own book ‘Journey to the Western Isles’, has in itself a more romantic title in the use of the word ‘journey’ then ‘trip’ or ‘tour’ and the desire to see a little of the faded feudal life and tough landscape are a big attraction in getting him there. He delights in the ruins and crags, and his own conception of himself as a grizzled sixty-year old writer who still can battle the elements. He also has an (occasionally embarrassing) habit of trying to convince Scottish Lairds in comfy, modern homes to move back into their castles to make the dream more real. As Henson says, ‘Johnson’s delight in exaggerated role playing is evident.’ Though, to be fair, Johnson also likes acting as a kangaroo.
There is a push-pull in the book between his ‘romantick’ inclinations and his Augustan solidity. His fondness for the Jacobite cause is described as ‘a romantic allegiance that reason and prudence modify.’ This seems a good description of Johnson’s views throughout, he may by nature be inclined to the fanciful but his reason kept him mostly in check.

I very much enjoyed this book, even though I didn’t gobble it up quite as easily as I expected. The writing is clear, the ideas well argued and the conclusions add another nice little layer on the notions I have of Samuel Johnson, a man who grows ever more complex.