James' Fever Powders - about as silly as Invermectin 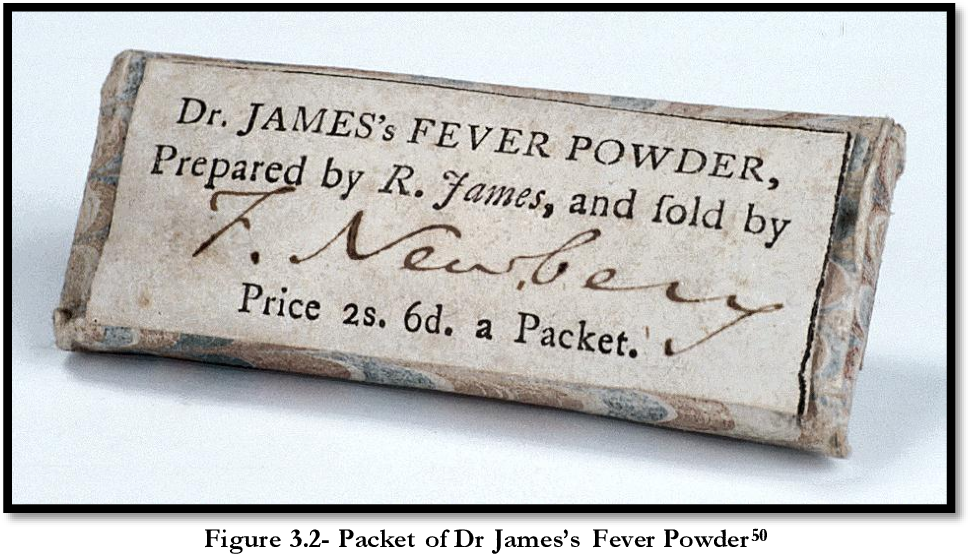 When Christopher Smart had a life-threatening bout of illness, he wrote a poem about it, detailing the despair he went through when reviewing his own life. He wrote about how hard it was to see the crying of his wife wife and his ‘little prattlers’, how he feared leaving them alone. He wrote about how his ‘feeble feet’ wouldn’t take is weight, his eyes couldn’t admit the ‘glorious light’ and how his nerves ‘convulsed’ and ‘shook fearful to their fate’. More than this, he wrote about the spiritual transformation of his illness. He wrote about how he reflected on his life and soul and found nothing redeemable about it, that he despaired of ever being loved by God or man and how he pledged to do better, thus becoming born again ‘a birth of joy’. By the end of the poem he commits to God ‘deep-rooted’ in my heart and he was to do exactly that, leading some people to think he was mad and lock him up.

The poem was published in 1756 by Smart’s publisher and Father-in-Law, John Newbery. A still moving testament to the pain and fear of illness, a truly felt expression of a faith renewed and a celebration the joy of recovery - Newbury put an advert at the front for James’ Fever Powders.

Robert James was a legit medical expert, a full member of the Royal College of Physicians and reputedly travelled to Holland to train for a time under Boerhaave. He was at Lichfield Grammar School the same time as Samuel Johnson, who wrote proposals (and a couple of entries) for James’ own medical dictionary. That dictionary was a huge success and remained an authoritative text into the end of the 19th century, despite how much medical theory and practice had changed since his time.

Another legacy of Robert James were his fever powder, which was still being used into the early 20th century. A marketing pioneer more than anything else, James at first upset society by patenting his medicine, seen as a money-grubbing mood for someone of private means. This was especially true as he lied in the patent about the ingredients, stopping people from bootlegging it in any way. The powders came in individual paper-wrapped doses in a larger bottle, one of the first designed to be bought and kept at home in case it was needed, rather than buying a new bottle per dose.

Then there was advertising. As well as the usual adverts in journals and newspapers, James had his powders thanked in place of a dedication (as in Smart’s poem) and even featured as product placement in a children’s story. In Goody Two-Shoes (probably written by Oliver Goldsmith), the eponymous heroine’s father died because he lived in a place where the miraculous powders could not be bought. It’s no co-incidence that both Smart’s poem and Goldsmith’s children’s story praised the powders, they were both published by John Newbery, who was an official licensed seller of the powders, using his book network to sell them across the country. Such marketing worked and tales of miraculous cures poured in and were used for copy-edit, even King George III used the powders to help his cataracts.

So, what was in these healing powders and how did they work? Eighteenth Century medicine was in a strange place at this time, the old mediaeval theories of humours had largely been displaced but there wasn’t a coherent new theory of health. The language had changed a little, doctors talked of nerves rather than humours but the practice had stayed the same. In the old system, humours would be unbalanced and medical practice was to remove the excess humours and bring the body back to balance. This meant if symptoms showed a patient to have excess of blood, they were drained of blood. Another humour was choler, or yellow bile and the treatment was to sick it up. As choler was regarded as the key ‘fire’ element of the body, fevers were a clear sign that the body had too much of it and so needed to purge that nasty yellow bile. As such, emetic pills were a standard technique in medicine, with people even taking pre-emptive pills to ward off sickness and one of the key treatments in Bedlam was to make its patients throw up to get rid of the fire of madness.

James’ Fever Powders, largely containing antinomy and phosphate of lime, could certainly make a patient throw up. Oliver Goldsmith, who had advertised the powders in his Goody Two-Shoes found himself very ill (we now think of a kidney infection). He took immense amounts of James’ Fever Powders in an effort to get better. His friends, seeing his condition decline rather than improve told him he should stop with the vomiting and build his strength up but Goldsmith refused. He had some medical training himself, having been a medical practitioner and (according to him) a graduate of Scottish and European medical universities. He proscribed himself more and more, and it probably killed him. He didn’t reach his 50th birthday. Incidentally, Horace Walpole wrote in one of his letters that "I think that (he) might have been saved if he had continued James's powder, which had much effect."

James himself lived to the age of 73, celebrated for his dictionary and a household name for his wonderful healing powders. Luckily, we live in an age with proper testing and safety standards. I would in-fact not be alive today if it were not for Beechum’s Powders - my parents met at a Beechum’s factory. (Incidentally, the inspiration to look into this was a cold I just can't shift.)