Review: An Almond for a Parrot by Wray Delaney 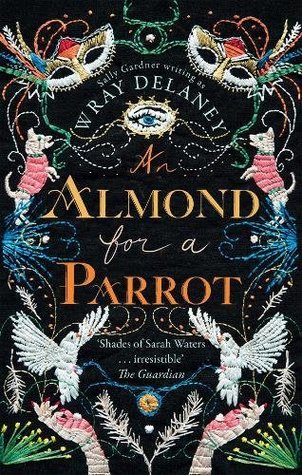 An Almond for a Parrot is the first novel by Wray Delaney, a pseudonym of Sally Gardner, a successful writer for children - and she’s having a blast.

No longer constrained by a children’s audience or (until the paperback editions) her real name, Gardner is let loose to do anything she wants. As a result, this book is a confusing, often cringeworthy and frequently quite bonkers mix of Fanny Hill and Nights at the Circus in which the chief joy is realising the joy the author had in writing whatever she wanted.

It’s 1756, Tully Truegood is imprisoned in Newgate for murder and is determined to tell her life story as "orphan, whore, murderer?" as the blurb puts it. The blurb fails to mention the ghosts, resurrected dead animals, trapeze acts or flying. The tone is immediately confidential and bouncy, cramming in theatre allusions, Shakespeare quotes and a recipe for hasty pudding. The early chapters often start with a recipe which makes sardonic comment on the chapter in hand; Tully’s own creation is something of a hasty pudding, there’s a recipe for virgin eggs when she begins to sexually awaken, and another for candied fruit when she discovers the joys of dress and make-up. Strangely, this recipe idea, which Tully even mentions as integral to her telling at the beginning of the book, sort of drifts away. It’s feels like while Sally Gardner enjoyed the ironic recipes they were in and when they became too difficult to come up with they are dropped.

The reader is introduced to Tully as a child, locked away in her drunken father’s London townhouse where she sees people that it turns out other people cannot, including a little boy in the grandfather clock and a small girl called Pretty Poppet (whom we later discover is actually named Poppet, which is like genuinely naming a child Swee’Pea). She is ostensibly raised by Cook, which explains the recipes, until her father remarries and brings along two step-daughters called Hope and Mercy.

The ghost element is then abandoned while the book cribs off Fanny Hill for some time. Like Fanny, she experiences some light lesbian fingering before seeing her first cock when she peeks through a hole in a screen, unlike Fanny, she’s not very impressed. There are also elements of the book that mirror Fanny’s relationship with Charles and a section that completely rips-off Fanny’s keeper Mr B, who teaches her French. Most excruciatingly, the influence of Fanny Hill extends to the language surrounding sex. My toes curled up to the ankle when the young Tully views herself in the mirror and realises she has ‘rounded ivory globes’ and the prettiest little ‘mound of Venus’. My toes went all the way to my knees when her seemingly puritanical teacher Mr Smollett wishes her to sit on his lap during lessons and she feels his ‘parsnip’ stir. Again, the only explanation I can think of for the amount and goofiness of the sexual stuff is an awful delighted at no longer being confined to writing for children.

The book barrels along with its plot and the magical elements start to come to the fore with a character called Mr Crease, who teaches her magic as she is also being taught the ways of a high-class courtesan. These elements of magic and sex even come together when she is gifted a ‘pearl hand’ by an elocution teacher at St Bartholomew’s Fair. This power is essentially a magic wanking hand which can bring men to climax at the merest touch, a gift she uses surprisingly rarely and often in public.

The central mystery surrounds a Fleet marriage was forced to take part in when she was twelve, with the main claiming to be her husband wishing to get her back and aided by his sadistic friend/lover. Here, the book that has been largely fluffy, taking the Fanny Hill, Woman of Pleasure attitude to sex and prostitution becomes very dark indeed. The sadistic friend is truly one of the worst people in almost any book I’ve read and his principal pleasures are physical abuse, rape and murder - and he doesn’t really have a limit to how young he’d go. Any comeuppance given to the man in the book is not enough and the grim nature of that part of the plot clashes terribly with the magical fortune telling dogs, secret bookcase passages and a world of caring, kind keepers where the worst thing about being a courtesan seems to be snagging a boring client.

The book is a mess, and with an author delighting in putting anything she fancies in, it was always going to be. However, it can’t be said that it’s ever predictable and there is a certain amount of fun in seeing how much fun the author is having.