Back when I was writing about Goldsmith, I had said that I hadn't seen any Goldsmith performed.


Well, the National are going to sort that out for me by putting on 'She Stoops to Conquer' at the end of January.

The only name that jumps out of me that I recognise is Steve Pemberton, who was in The League of Gentleman, which I adored and also in Psychoville, but I'm going for Goldsmith mainly. 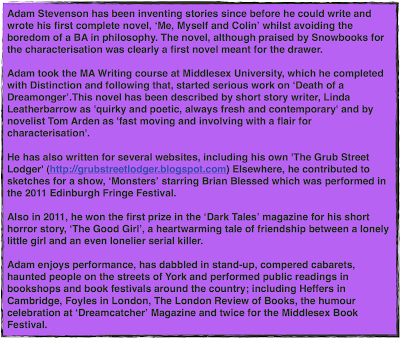 Email ThisBlogThis!Share to TwitterShare to FacebookShare to Pinterest
Labels: Fiction

Review - Tom Brown’s Amusements, serious and comical, calculated for the meridian of London

As this blog is the ‘Grub Street Lodger’ it seemed appropriate to finally review an archetypical Grub Street production by an archetypical Grub Street writer.
Like many dyed-through-and-through Londoners, Tom Brown was born outside of London but moved to the city having failed to earn money in other places in other ways. Brown moved to Aldersgate Street, a mere spits from Grub Street where he worked as a translator and wrote a great deal, much of it anonymous and a lot of it satirical. Some famous incidents in his life include a punch up with the publisher Abel Roper, which Roper turned into a bestselling pamphlet ridiculing Brown’s fighting as ‘open-clawed like a cat’ and celebrating his own laconic and effective closed-fist punches to the face.
Roper had earlier written a preface in a Brown book, where he reflects that Brown hadn’t written the preface himself because he had been paid and so has caught ‘the epidemical disease among some scribblers, who have no wit to sell, while they have money to spend, or can be trusted; but when they are reduced to a low ebb, they’ll sneak, fawn, and cringe, like a dog that has worried sheep, and is fearful of the halter.’
There are many other interesting stories and legends about the bare-faced cheek, the wit and the wheeling and dealing of Tom Brown in a number of books ( ‘Tom Brown of Facetious Memory by Benjamin Boyce, is a good read) but the issue now is the most famous of his works, ‘Amusements, serious and comical, calculated for the meridian of London’, published in 1700.
There are twelve ‘amusements’ in the book, starting with the preface which he remarks ‘can be as long as I please, for a long preface is an amusement indeed’. The preface is probably my favourite of the amusements (I am beginning to love a good preface) as he flippantly and breezily describes the method he has taken in writing the book. He describes how he plans to pretend an Indian has been ‘dropped’ on London and is going around it, looking at the different parts and making comments. Brown then says that there will be times when he drops this conceit and then takes it up again as he feels like, as it’s his book and it’s up to him what he puts in it. Finally, he describes how not all the amusements will be funny ones, some will be serious, this is because ‘The Whole Life of Man is one Entire Amusement’.
The striking thing about the preface, and the rest of the book also, is the confidence and control Brown has over his material and the light way it is written. Brown comes across as impudent, rude, cheeky but a bit of a charmer. He rules the book his own way and trusts you will be amused by it, and you are.
None of the amusements are particularly original; jokes about talentless, cringing courtiers, jokes about marriage, including mother-in-law gags, jokes about quack doctors that over latinise their speech to sound intelligent. There are jokes about naughty goings on in theatres, about cloistered unworldly academics, who are secretly very worldly indeed and jokes about gamesters and rakes preying on each other. The key to the amusements, the one that makes them amusing, is that none of these jokes are laboured or overwrought, everything is fresh and instant and readily accessible, even after this time. The book is not great literature but it is (as it wishes to be) amusing, a pleasant and engaging bit of light reading.
Unlike (his contemporary) Ned Ward’s, London Spy, this books doesn’t tell the reader a great deal about London, or provide any realistic vignettes of the city. Tom Brown’s London is a London of his imagination, where the different sections and areas provide him with different things to observe and laugh at. It’s a London of the mind, opposed to a real one.
However, Tom Brown does describe London in a manner that feels even more true in multicultural London today than it did then, and, I believe holds truer then even Johnson’s famous comment about people being tired of London are tired of life. Tom Brown says;
“London is a World by it self. We daily discover in it more New Countries, and Surprising Singularities, than in all of the Universe besides. There are among the Londoners so many Nations, differing in Manners, Customs, and Religions, that the Inhabitants themselves don’t know a quarter of them.”
Which is what really enlivens the city and makes it perennially fascinating place to write about, read about and live in.
Till next time
Yours

I bought this book after reading a blurb for it in another book in the series. This series, published by John Hopkins press in the twenties and reprinted late sixties offers some very interesting topics, and I’d like to have a few of them. (Thus far I have read and reviewed; ‘The True Genius of Oliver Goldsmith’, 'The Unspeakable Curll', ‘The Grub Street Journal’, ‘Clubs of Augustan London’ and ‘Tom Brown of Facetious Memory’.)

The book promised to shed light on Johnson’s moral thinking and writings, a promise that the book has fulfilled admirably as well as invigorating my reading of Johnson and getting me raring to reread Rasselas in the new light given by the book. The book's main claim is that all of Johnson’s utterances, but in particular his moral ones can be explained with the two forces of imagination and reason.

Imagination is defined as the force in the human mind  which pictures that which is not currently there and can be projected forward in the forms of hope and fear, but also backward in the form of memory. This causes imagined golden ages and hateful times. Imagination, according to this view of Johnson, springs from man’s temporality, and to follow the ‘choice of life’ is to follow imagination's hallucinatory, delusive and narrowing dance.

Imagination causes the mind to latch onto earthly things, an ambition to be a successful author for example, and to picture that success until the mind narrows onto this hope for the future and it becomes a driving need, maybe even an obsession. However, when/if this fantasy is fulfilled, the fulfilment is in the temporal and imperfect world, and the mind will find something else to latch onto. The life of imagination can never be fulfilled and it is this that Johnson meant when he described life as moving not from ‘pleasure to pleasure’ but from, ‘hope to hope’.

Reason is defined as the logical and intellectual link to ‘the choice of eternity’, unlike imagination's way of narrowing the mind and pulling it right into the pain of human drama. Reason takes the mind aloft and looks at these obsessions dispassionately. Reason can curb the imagination and when exercised can change a person from being an obsessive butterfly collector, with no interest in anything outside of butterflies, to a true agent of science. Because imagination focuses the mind on the self and the ends of the self, it is reason that inspires compassion for others and truly humanitarian ends because it sees above the petty squabbles of people.

The problem is, that to to feel that a person can be a completely rational being, or to try and be a completely rational being ourselves is itself one of the delusions of imagination. As people we are inextricably temporal beings, constantly over the precipice of death and it is the hopes, delusions and obsession of imagination that keep us waking up in the morning and living life. So it is not the eradication of imagination that Johnson wants, but the use of the rational side to keep us connected to the larger, more general and universal concerns, to stop imagination leading us down an egocentric tunnel. It is this process which is the passionate intelligence of the title.

I’m not sure how I feel about this dichotomy, if just because like all of us in the twenty-first century, I have been brought up with the romantic notion of imagination as a positive force and as a storywriter and lover of silliness and playing, especially fond as a child of ‘let’s pretend’ games, I find Sachs' conception of imagination hard to swallow. However, the idea of their being two impulses in a human, one to the narrow and specific and one to the general and universal does seem an accurate description of the world. As does the repeated need of obtaining and remembering that humane and detached view that saves us from our own desires and obsessions. If you can find this book, I recommend to pick it up, it gets the mind thinking if nothing else.
Yours