I was going to write up my trip to Ben Nevis in a humorous and delightful way, but my brain has been mush.

Going to open up and see if there is anything in there.

Email ThisBlogThis!Share to TwitterShare to FacebookShare to Pinterest
Labels: Something Silly 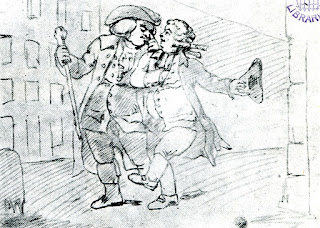 Although I am not exactly following the footsteps of Johnson and Bozzy, I am up to the Highlands of Scotland to see if I can haul my bulk up Ben Nevis.

I shall be taking their two respective books on Scotland, of course. And some foot ointment.

I've started a blog of reviews in one sentence or less. The main theme will be the holy trinity of books/films/music but anything will be up for micro-reviewing.

I plan to set myself the challenge of reading all twelve volumes of Casanova’s A History of My Life within the next two years. I have copies of the modern translations by Willard Trask, which claim not to be expurgated or bowdlerised in any way. Judging by the first volume, considering what has been left in, I can’t imagine what would been cut.

The claim always made by Casanova afficienados is that there is more to Casanova than pure sex and boasting. Maybe later in the game, but this volume is pretty much wall to wall sex with a little cheating along the way.

Before we start with his story, we have the Preface, in which we meet Casanova and he tries to explain the sort of person he is and the sort of book he is writing. He hopes that the writer will see that, ‘my follies are the follies of youth. You will see that I will laugh at them and if you are kind, you will laugh along with me’. He also explains that his earliest memory will be at the age of eight because he didn’t live before then, he merely vegetated.

This earliest memory is about being taken to a witch to be healed of a constant nosebleed. It is painted in almost cinematic colours, describing a hushed boat ride across Venetian waters and the shack with the witch in. It is shortly after this he is sent to Padua to get some schooling.

In Padua he faces squalor, which he complains about until he is lodged with his teacher and their daughter Bettina. She is the first person to awake amorous feelings in him and we are then treated to a chapter of pure farce and bedroom comedy including a rival lover, demonic possession and a very handsome exorcist. Alas, Casanova does not get his leg over yet but he does acquire a love of intrigue and farce that will become as much (or even greater) pleasure to him then simple sex.

It is somewhere about this time his patron sends him to a seminary, which he finds himself kicked out of due to a bout of bedhopping. As a result of this, he is locked in an island fortress to keep him out of mistress.(I meant to write 'mischief', but I like the typo). He spends his time in the fortresschatting, falling in love (and in bed) with the head guard’s wife and mooching around. At one point he manages to sneak out the fortress, across the water and beat the servant of his patron, who he blames for locking him up, before sneaking back and feigning a sprain. This is where we see a dark side of Casanova, he hopes to have killed the servant, even dumping the body in a canal and is certainly non-plussed about hearing the bruised man spluttering his way out if it.

He is then sent to Yugoslavia to become a secretary to a Bishop (he has, through this whole time been a sort of non-attached clergyman) he sets off, having lost most of his money at cards. We are then treated to many adventurers, most involving a disgraced Franciscan monk who prefers to beg for food instead of money, as he is more likely to get food worth more than cash handouts. The monk praises St Francis of Assisi for this shrewd advice. Casanova finds the monk a useful companion but is shocked how the monk pockets the odd valuable as well as food. There was a wonderful detail of the monk’s travelling cape being weighed down with enough food for a month.

In his travels, Casanova is locked in quarantine. He makes the most of it by chatting up a Greek slave in the floor downstairs. This culminates in her wedging herself up through a hole in the floor and giving him a blow job.

Finding the Bishop to be living a very dull life, he decides to go to Rome and make his fortune in the church. He does well, having received good letters of introduction from a Casanova he meets on his travels, he gets into the service of powerful Cardinal Aquaviva. He also ingratiates himself in a well-to-do family, where he finds ways to sleep with the man’s wife. This includes sneaking into her bed at night, finding time in solo carriage journeys and one time on a tree that has provided a ‘natural bed’.

His career in Rome also starts to pick up. He makes the Pope laugh several times and even receives a few Papal gifts as well as flirting in verse with a powerful Duchess. This doesn’t get anywhere as he reluctantly helps a lady trying to elope with her lover and so brings too much scandal on him. This career over he sets off towards Constantinople with some promising letters of introduction and a small fortune. This is where the volume ends. He is barely nineteen years old.

I have missed some of the more salacious and daft exploits out, but the book is relentless in it’s pace. It's always driving forward to the next adventure and narrated with a smiling, joyful wit by the older Casanova. Even more delicious are the older Casanova’s moral judgements on his younger self. These judgements reveal a scampishly fluid set of morals certainly. One of my favourites is,
‘Cheating is a sin. But honest cunning is simply prudence. It is a virtue.’ There is another one about how when he stole money for his own fripperies, he is only stealing it from someone who was going to waste it on their own fripperies.

Casanova does some terrible things, from attempted murder, cheating and much jumping into bed with people’s wives, but we always like him. I think part of this is that the older Casanova is well aware of the ludicrous nature of many of his adventures.

“For my own part, since I have always admitted that I was the chief cause of all the misfortunes which have befallen me, I have rejoiced in my ability to be my own pupil, and in my duty to love my teacher.”

It’s a duty in which he succeeds, I look forward to reading more.

Throughout the Jubilee/ Olympic season, the British Library have been running an exhibition called ‘Writing Britain’, charting the relationship of British literature and its landscape. The other day I went to have a look.

On first impressions, it seemed a little flat. It is certainly a reading exhibit and showed little of the fun and visual flair of the free ‘Imaginary World’s’ exhibit a little while ago. However, when you start going around and reading and looking at the objects displayed that you really realise how many treasures are in one room. I was absorbed for nearly four hours.

The exhibition was arranged in five themed areas with cases of books and manuscripts in each one. The themes were, the countryside; industrial towns, moors and wastelands, suburbia, London and waterways. I most enjoyed the London section (which thrilled me with having John Stow’s survey of London and John Gay’s Trivia in the same case - books I have aways placed together on my shelves).

To be honest, I found the the overall focus a little flimsy. There is little about London that is exemplified in descriptions worrying about the unnatural tastes of Hyde, but the description of London crime was used as an excuse to show a manuscript of that book. The description next to it included the very interesting snippet that it was the third manuscript of ‘Jekyll and Hyde’ as Stevenson’s wife had thrown the others away, worried about what the story was doing to her husband.

Indeed, the most interesting part of the exhibit was comparing all the different manuscripts to each other. Whether Ishiguro writing ‘v good’ next to some of his own writing or Oscar Wilde scoring parts out and squeezing elements in to perfect a joke in ‘Importance of Being Earnest’, the manuscripts showed such interesting differences in writing process.

Fanny Burney and Anne Bronte shared a careful hand with no mistakes, whereas JG Ballard and Blake scrawled in big messy loops. There was De Maurier’s careful notes for Rebecca and Galsworthy's’s plans of Soame Forsyte's house in the Forsyte Saga. There were the several drafts for ‘The Buddha of Suburbia’ and a number Greene's attempts at ‘The Piper at the Gates of Dawn’ chapter in ‘Wind in the Willows’.

JK Rowling’s manuscript for ‘Harry Potter and the Philosopher’s Stone’ show her to be a product of a computer age, with a main draft with lots of crossings out and another page with paragraphs to be inserted. It also shows that she makes little heart shaped doodles as she writes, which I found to be very endearing. There were plenty more, including Dickens and lots of poets, especially romantic ones, as would be expected in an exhibition on place.

It made me think, as young writers will be more used to the computer then the pen, seeing these sorts of working drafts will be more of a rarity as the changes will be invisible or on computer files.
I for instance sometimes write ahead of myself, go back and catch up, using the momentum to get through the piece. It may be able to spot this in my writing, but each typescript looks clean, clear from the scratches it took to get there.

The exhibition also had other treasures, a 600 year old copy of the ‘Canterbury Tales’, an early chapbook about Robin Hood as well as early copies of Piers Ploughman, Gerald of Wales’ description of Ireland and Monmouth’s history of Kings. There were first edition copies of Goldsmith, Grey and Fanny Burney as well as John Lennon’s hand-scrawled lyrics for ‘in My life’. All of which had a sad git like me giddy with excitement.

As for the theme though, it seems obvious that a writer talks about place. The main theme of the novel I am working at now is how an author engages with their time and place, while the last one had strong links to parts of London (and a few scenes in Horsham, Sheffield and Coventry). The point of the exhibition either seems to be too subtle for me to have grasped or too simple to waste much though on.

What I would really love the British Library to do is to create an exhibition about writing process, comparing manuscripts, pictures, draft notes and interviews to create a good hard look at how writers write. Maybe I should drop a line and ask them.