Trip to The First Georgians at the Queen's Gallery, Buckingham Palace.

I went to the Queen's Gallery with some trepidation. For a start, a resident of London just does not feel comfortable going near the palace, even the Queen doesn’t like it, Buckingham Palace is for the tourists and nobody else. Second, I wasn’t sure I would enjoy the exhibition when I got there.

The early Georgian age in my mind is the world of the coffeehouses, the raucous conversations and arguments, the hacks of Grub Street trawling the streets of London for another gin. My imagination was the world of Hogarth, Pope, Swift and Gay - none of which were supported by Georges I or II.

In some ways my fears were realised. There were a lot of bulky console tables with heavy marble tops and overelaborate gilded legs. There was a monumental example of the stolid, dull console table, two gild candlesticks and mirror affair that has a name beginning with ‘Tri’ and is utterly dull...but there was a lot more.

The first room introduced our characters. George, Elector of Hanover and 50th in line for the throne of Great Britain, invited by parliament for his protestant religion. His son, also George who said he hated ‘boetry and bainting’ and was the last British King to lead an army into battle. George’s wife Caroline, who ended up something of a revelation and their children, including Frederick, a Prince of Wales who never became King.

That first room had two very striking items. The first was a letter from Frederick to his son, the future George III in which he talked of his ideas of kingship. The striking thing about the letter was the personal tone, the directness in which the prince wrote to his son. The second were a trio of portraits of Frederick’s children, the youngest daughter appearing so lifelike you could almost hear her gabble.

The next room was about the palaces and made the interesting point that the early Hanoverian monarchs only made alterations to existing palaces in an effort to maintain a sense of modesty and link with the English monarchs of the past. The room after that was about the wars, at home and abroad and including the Duke of Cumberland’s plans for Culloden. To be honest I couldn’t understand most of the maps and although I understood the politics of the time, the implication of those wars to the politics of now were rather glossed over.

After that we got a Hogarth room, which is a very good thing for a room to be. It included a run of prints from the Harlot’s Progress, which seemed almost 3D compared to the blurry and splodgy knockoffs of the Industrious and Idle Apprentices on my wall (I aim elastic bands at the smug face of Francis Goodchild). There were also subscription tickets, rough sketches and a rare red printing of A Modern Midnight Conversation.

I was a bit confused after that room because the next was one which obviously featured pre-eighteenth century works. It turned out the room was to showcase the kind of collecting that was popular among the early Georgians and how it was displayed. I found out that symmetrical patterns were favoured and the collectors were prepared to add or cut parts of the paintings to create the required symmetry. This is also where Caroline came to the front, she was a very keen collector and had Holbein’s sketches taken out of a dusty drawer and displayed properly. She also had a fondness for Tudor portraiture and was building up a gallery of past British monarchs from King Alfred to herself. 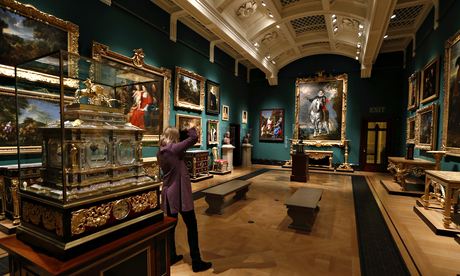 Subsequent rooms seemed to have less focus but had a whole bunch of highlights; including porcelain soup tureens in the shape of cauliflowers, a harpsichord that was just aching for me to touch it and a stunning Canaletto of the Thames from Somerset House that felt as if you could step into it like Mary Poppins. I particularly liked the man playing/stealing the ducklings.

At the end of that room was a ludicrous silver gilt dinner service with a fishy theme. Then a few more pictures, including a great one of all the people/cows mingling in St James’s Park and then on a consciously low key note, a conversation piece of Prince Frederick and his sisters playing music.

So, what I worried would be a little dull and ugly was a very absorbing three hours. I recommend the audio-guide, it wasn’t too intrusive and the extra information is genuinely absorbing and some of the musical extras were lovely, I recommend track 119.

Also, if you get the ticket stamped you get a free year’s pass to the gallery so I may very well go back some time before October to see my favourite parts again.

-Oh, and there is a TV programme on the subject on BBC4 soon.

As for this site, I haven’t written much this year so far but expect me to be in force over the next few months for reasons that will become clear.