The bad boy is back. Volume Two and Casanova is more shocking than before. I took my time reading this, finding it harder to pick up as I did to put down, the sheer unstoppable nature of it made it a difficult read.

It starts in good form, with Casanova falling in love with a castrato called Belino and sleeping with Belino’s twelve year old sister to get to him (much to the girl’s mum who decides Casanova’s money is a gift from God). After some unfortunate bedroom to-ing and fro-ing, Casanova feels he spies a penis but knows that the fact that he still feels horny convinces him that Belino must be a girl. A second try reveals that Belino is in fact a girl with a complicated glue on penis and not a castrato. He helps her set herself up as a singer and she goes to Mantua, which he will not because he still feels fate is leading him to Constantinople.

Along the way he loses his passport, is imprisoned and ‘accidentally’ escapes by deciding to sit on a horse that bolts. I’m not sure I believe that accidentally even a little. Then he goes to a city where the doctor thanks him for giving everyone a venereal disease that has kept him in business. Eventually, he arrives in Constantinople where he declines an offer of gay sex and also a rich marriage which comes at the price of becoming a Muslim. Then he joins the army, hangs around in Crete where he tries to defrost an ice-maiden by being very annoying and clingy and making special sweets out of her ground up hair.

Later he goes back to Venice as a tramp, gets up to some ‘hilarious’ unsavoury escapades and then saves a rich man of nobility from dying, becoming his adopted son and the inheritor of a rich estate in the process. Then he wanders about a bit playing pranks (including giving a girl some fart sweets) before starting some elaborate charade as a magician...

...and so it goes on. Casanova, still not twenty-five, lurches in and out of bed, prison and adventure. He also really has caught the gambling bug and gains and loses money all over the shop. All of this youthful extravagance lovingly captured and recreated by old Casanova who really knows how to tell a story. The last part where he is pretending to be a Magician is slowly built up to a climax when the volume ends with the words.
‘It was night...’  and no more, pulling you into the next volume.

Casanova’s very fluid set of morals came into play. At one point he spends a page arguing how it was only morally right to lie as telling the truth would have been impolite and a let down. Another time he recounts that he ‘... told them the whole story exactly as it happened, omitting only what it was not prudent to tell them.’ We wonder whether he is doing us the same disservice.

Again there is the dark side, along with all the humour, the shock and the gasps of disbelief that came out my mouth as a read his adventures, there is something unpleasant lurking. There is the time he beat up a prostitute because she took the money but held back on the goods. Also disturbing is the lengths he goes to for a joke. Digging up a dead body, cutting an arm off and leaving it in a bed to scare a man - all in revenge for making his suit dirty.

So, again it’s hard to completely like Casanova but at the same time you can’t help fall for his charm and vivaciousness.

I look forward to volume three, but not yet.

Review: A History of John Bull by John Arbuthnot

He was an interesting man, the royal physician and later a thriving doctor. The running joke among the Scriblerans was about the fact that he always had plenty of interesting and outlandish ideas to write about and was more than willing to give those ideas away. All accounts paint him as a funny, witty man, generous and good company. It seems clear that he didn't think of himself heavily as a literary man and it is sometimes hard to know which parts of the Scribleran body of work are his or not.

If 'John Bull' is anything to go by, then I would suggest that any part of Scribleran literature that involves long lists of things must be an Arbuthnot one. He really does love his lists. There was one chapter that consisted only of a list of various legal services. I imagine the last chapter of the 'Memoirs of Martinus Scriblerus' was probably one of his too, as he seems to be an ideas person and likes the format of lots of silly little ideas that have not been completely developed. 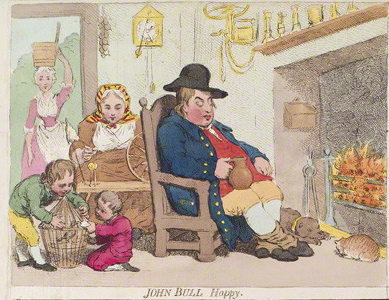 John Bull itself came out as three pamphlets before being collected in book form. They tell of the trouble that occurred to John Bull when he set out to sue Louis Baboon for his tailoring contracts and got greatly in debt while his lawyer, Henry Hocus and his business partner, Nicholas Frog do well. This storyline is a thinly told story of the War of Spanish Succession, with Nicholas Frog as Holland (confusing I know), Louis Baboon (AKA Bourbon) as France and Henry Hocus as the Duke of Marlborough.

Later episodes include the harsh treatment of John's sister Peg (Scotland) and her love of a young man (representing Presbyterianism) who starts pious but then tries to make Peg's Mum (Anglicanism) ill. The story also talks about the death of John's skittish former wife and his remarriage to a more sensible one - this being an analogy for changing parliaments.

Much of the humour of the book has evaporated. A topical political allegory loses much of its laughs and punches when the things it is satirising are so fixed to their time. All we are left with is a mildly entertaining story about a foolish but loveable man who nearly bankrupts himself in suing someone else.

Of course the main legacy of the book is the character of John Bull, the stoic, no-nonsense, hard-living representation of England. You don't hear so much about John Bull anymore and I imagine he is not how the English would like to represent themselves - however, some of his qualities have been invested in that icon of steadfast Britishness, the bulldog.

So, not all that recommended, although I am interested in reading a biography of John Arbuthnot some time, he's an interesting fella.