Gulliver's Travels in a One Minute Nutshell

Email ThisBlogThis!Share to TwitterShare to FacebookShare to Pinterest
Labels: One Minute Summary, Scribleran

Here are the Rudiments of Genteel Behaviour

Pictures from a facsimile of 'Rudiments of Genteel Behaviour' by F. Nivelon. 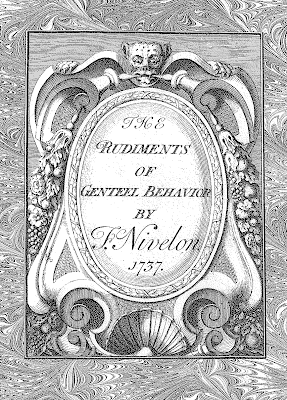 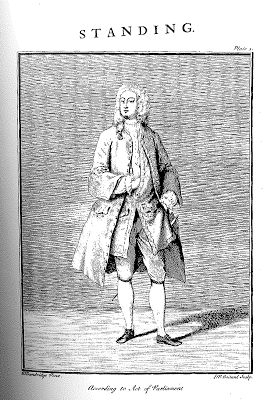 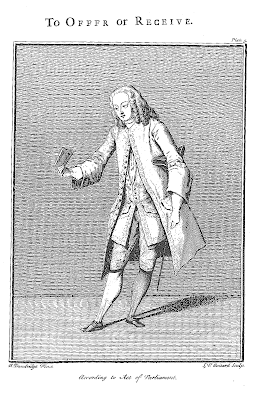 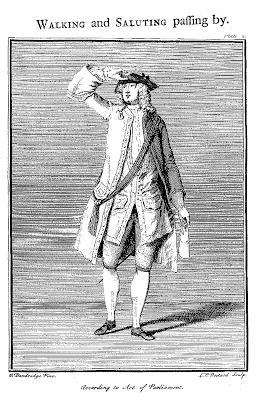 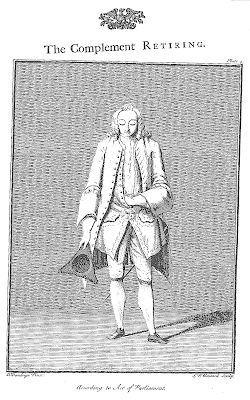 Expect a review of 'A History of John Bull' by John Arbuthnot soon.

Email ThisBlogThis!Share to TwitterShare to FacebookShare to Pinterest
Labels: Something Else

I thought I knew Gulliver, I had been brought up on the cartoon version of Gulliver in Lilliput (and can still sing most of the the ‘All’s Well’ song) as well as being aware from my reading around eighteenth century literature that it also included travels to a place he was very small, a land of boffins and some horse-people. What I was not expecting was the full on satirical thrust of the piece, the deep misanthropy of the conclusion and the genuine character journey Gulliver takes to get there. In terms of this character journey, Gulliver ended up being a far more readable and involving book than I was expecting.

We begin with a rather self satisfied man being shipwrecked on a beach. He wakes up, tied to the ground and being crawled on by small people, he is in Lilliput and they are the Lilliputians. At first he is feared by the people but they eventually come to respect him, trust him and then use him as there saviour against the mighty fleet of Blefescu. Shortly after this he is then not trusted anymore and has to find a way back home or he will be blinded and used as an animal of labour by the minuscule people.

Yes there are the scale jokes, he puts out a fire by pissing on it and there is an awful lot of discussion of where a man as big as he can defecate. Swift lives up to his reputation for toilet gags and Gulliver’s Travels makes up a whole chapter in Norman Inkpen’s authoritative, ‘Shit Jokes - A Study of Scatological Humour’.

What I wasn’t expecting was the bite, the people of Lilliput believe they are the undisputed masters of the world and that war and torture are proper responses to the question of which end to open an egg. The turning of the king against Gulliver and his plan to humiliate and subject him because of how he is represented by the King’s ministers, is shocking. They are small people and their concerns are petty but so are ours

Next Gulliver goes to Brobdingnab, where he is as small to those people as he was large to the people of Lulliput. Although there are satirical scenes where he tries to explain the affairs of Britain to the king, the focus is less on jabs and politics and more the effect being so very small has on Gulliver - especially considering that he was the ‘big man’ in the last land.

These scenes not only describe the physical discomforts of being a man in a place where a monkey can be a strange and deadly threat and a wasp utterly terrifying, but also the psychological effect on being so insignificant. For a start, he finds the people of Brobdingnab hideous as he can see all the flaws in their skin, the lice in their hair and the dirt about their personages. Worse still, as a man with a certain amount of self-pride; he is now a small curiosity, nothing more than a plaything for the queen and her court, looked after by the nine-year-old girl, Glumdalclitch. He finds this extremely demeaning and the necessity of being constantly on his guard against the over-sized animals also gives him a certain spiritual exhaustion.

These two lands fit so well together, inflating his ego and then crushing it and the scenes where he returns home, first to find himself speaking down to everybody and then speaking upwards. If the book had ended here it would have been an amusing book but although these are the best known elements of the story, I don’t think they are what makes the book a classic.

Nor do I think the third travel to be the key to the book’s longevity. The chapters on Laputa, the flying island and the parts set in the ‘Academy of Projects’ in Balnibarni are pretty standard bits of Scribleran writing against false learning. It was interestingly done but certainly not anything I haven’t read before. Similarly the land of Glubbdubdrib, where ghosts of the near and ancient past are compared doesn’t add much to the ancients verses moderns debate in The Battle of the Books. It is only the land of Luggnagg where Gulliver hears of the struldbrugs, immortal people, that we get something new. Gulliver hears of these people and rhapsodises on how wonderful it must be to have hundreds of years of culture and wisdom contained in people, his audience laughs before painting a terrible picture of eternal life without youth, the poor struldbrugs codgering further and further without ever having the release of death.

I think it is the third book that really cements Gulliver’s Travels into the state of a classic and I am going to extract some of the elements that make it so by comparing it to another classic, the 1968 film ‘Planet of the Apes’.

Taylor, the hero of Planet of the Apes is a misanthrope who has gone on a faster-than-light space mission to find ‘something in the universe better than man’. Like Gulliver, he is stranded somewhere rocky and wanders before finding a herd of wild human-like people. In Planet of the Apes, these are mute vegetarians, semi naked and rather attractive and decorus - they are then hunted by the savage apes riding horses. On seeing these people, Taylor remarks ‘if this is the best they’ve got, we’ll be ruling this country in six months’. Gulliver is presented with an uglier vision, hairy, human-like creatures who chatter and squabble and fill him with revulsion. These creatures then attack him and pelt with with shit (more stuff in Inkpen’s book about that). These creatures are not men but Yahoos. Gulliver is then saved by a horse, who he starts to suspect is talking. Over time he begins to learn the language of the horse who are called the Houyhnhnms. He comes to love them, believing them to be the most perfect rational being. The horse asks a lot of human culture and the more Gulliver describes it, the harder he finds presenting it in a good light. He and the horse eventually realise that humans are nothing more than the odious Yahoos with a little reason. There are chapters comparing the brutish Yahoos and humans and finding them to be extremely similar. This realisation is gradual and by the end, he is a pompous misanthrope who cannot stand anything human.

Unfortunately for him, the Houyhnhnms throw him out and he has to go back home, where he cannot stand being near other people, seeing them as complete Yahoos. He however sees himself as better, as he has seen the example of the Houyhnhnms and will try to emulate their ways.

Taylor on the other hand finds no-one better than humans, he just finds other animals equally bad. It's interesting to reflect that to Taylor, the apes are Yahoos - whilst to the apes, Taylor is one. As Zira the ape scientist says to Taylor, 'you're just so ugly'.

Nothing will ever make me a raging misanthrope, I remain a believer in the fact that human potential is huge and we manage to do pretty well with what we have, but it did leave me with a little niggle - is there something better in the universe than humanity?