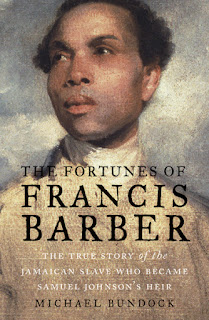 It was a special treat for December’s Johnson Reading Group, the author was among us (and had been for some time).

‘The Fortunes of Francis Barber’ is a meticulous, clearly written and enjoyable account of the life of Samuel Johnson’s black servant, who later became his chief heir.

There is painstaking research (and a little admitted guesswork) in finding his origins as a Jamaican slave; of how he was brought to London, freed and put into Johnson’s house. After being a little schooled, he went away to work for an apothecary and later into the navy. Brought back by a worried (and overbearing) Johnson he went to school again (a 20-odd year old man amongst teenagers) and worked in Johnson’s houses. Then he married and had children - this family being around Johnson at the end. Having been left an astonishing amount of money, the family moved to Lichfield where they ran into hard times and medical bills. Barber’s family survived and there are direct Barber relatives walking about today.

That’s the outline, but the journey is where the pleasure is. Bundock’s prose flows easily, with a sly humour in the background and a keen eye for telling details. The two most moving to him were the slips of paper, scraps from the making of Johnson’s dictionary, where Barber practised writing his name and the country ‘England’. The other being a prayerbook, which Johnson first gave to Tetty his wife and later to Elizabeth, Barber’s wife. A thoughtful gift and a strong indication of the worth he saw in Elizabeth.

We were struck by Francis - his ability to make friends (and the odd enemy), his adventurous nature - he chose a sailor’s life. We were struck by his apparent ability to enjoy himself and his looseness with money. We wondered how a man, a former slave, who had been educated at a grammar school and at the elbow of Samuel Johnson, was seen by other servants or by other black people in London. We were struck by the black nightlife, the balls, parties and gatherings of black Londoners, which Francis seemed a part. The evidence is small, incidental parts in letters and journals, the odd mention by Johnson, but the book teases out a notion of the man and his life - which we enjoyed teasing out even further. As one member said, ‘we know he read, what would he have made of Robinson Crusoe?’ What would he have made of Colonel Jack for that matter?

What of Barber and Johnson’s friends? It’s clear Hawkins hated him, he seemed to resent the amount left to Barber and to dislike him generally, giving seven pages of his Life of Johnson over to attacking Barber. In examining this relationship, Bundock said he tried to be fair to Hawkins - but none of us were on his side. Goldsmith seemed to be oblivious to Barber, in that pretty Goldsmithy way. Boswell and Barber became good friends, trading money, kind wishes and juicy tidbits of Johnsonian lore.

As for Johnson himself… it seemed to be a Father/Son relationship. It seems that Barber could never be a grown up in Johnson’s eyes and that Johnson was always a commanding figure in Barber’s, but there does indeed seem to be a love there - only two people had Johnson sign ‘affectionately’.

As well as all this, we spun in myriad directions: How could Thistlewood be a learned man and such a monster to his slaves? Did the CoE really own slaves and plantations? What connections did a celebrated Lord Mayor of London have with the slave trade? … And how did a Grub Street hack manage to get away with a life of Samuel Johnson by Francis, Barber - the (phoney) recollections of Johnson’s hairdresser? (Note the strategic comma.)

As usual, there was more to say then time to say it and conversation flittered through the house long after the evening was officially over. Another enjoyable evening and a book that I recommend be slipped into the stocking of anyone with a historical fancy - a rarely told tale, told well.