Review: The Temple of Hymen by Jacqui Lofthouse 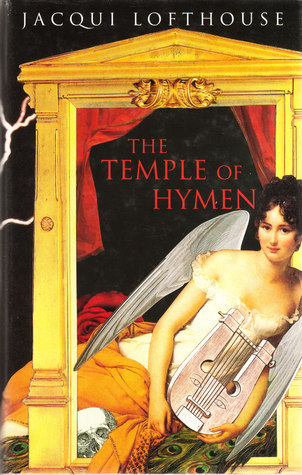 The first book I read this year was Lydia Syson’s The Doctor or Love, a biography of James Graham, a fascinating eighteenth century doctor who experimented with electricity in a grand-standing, showy way, creating a stupendous building called The Temple of Health which functioned something like a modern spa. When I read that book, I thought it would make a fascinating setting for a play or novel, I envisioned it something of a farce.

The Temple of Hymen by Jacqui Lofthouse is a melodrama with a dark, unsettling tone throughout. There are two narrators, Emilia, who has written her memoirs and Lord Vermillion who is editing them and adding his own comments. It strikes a strange note immediately, with both narrators warning the reader not to be taken in by the honeyed word of the other. There are allusions to great tragedy in the future and it’s clear that the reader won’t be allowed to have solid ground to make their judgements from.

Finding out about the younger Emilia, we learn she believes she murdered her mother and is a devil child. This is furthered by a trip to Bristol to drink healing waters which turn red as blood at the same time she bites a woman who is scaring her. Although the waters turning red has a scientific explanation, she can’t help feeling tainted. The little family move to a house in the Adelphi buildings that her father won in a lottery and they watch as James Graham’s Temple of Health is being set up next door. It’s clear from clues that the family are down on their luck and her father gets Emilia dressed in the latest fashions and she is given the most fashionable hairstyle, a huge, towering concoction of her own hair, wool, fake hair and grease. Because they are not rich enough, the hairstyle is not maintained and Emilia is sure there’s something moving around in it. In a truly horrific scene, Emilia undoes the hairstyle and hundreds of flies buzz out, with a huge writhing mass of maggots at the centre. It’s such a good use of historical research, that such a thing could happen but it is nasty and visceral and completely unnerving.

Shortly afterwards her father dies and she goes into mourning. One day during that, the Thames freezes over and Emilia decides to go the the Temple of Health next door, as she feels tainted by her feelings of having the devil in her, as shown by her recent infestation. This is something I found very off-putting about Emilia’s character, that it snows and the Thames freezes and Emilia decides it’s a sign for her. Later other events happen, which are large social and weather events and each time she decides it’s happened to specifically give her messages.

The Temple is described as awe-inspiring and James Graham himself is portrayed as something of a Wizard of Oz figure. Having read a biography of him, he seems like he was charismatic, a natural showman and he had some genuinely good notions about keeping healthy but he struck me as a faintly comical figure (my notes say doofus). In this he’s something of a distant wizard.

As Emilia tells her story, Vermillion comes in, nominally to set facts straight but really to tell his own. He hints of horrors seen when he happened to be in France during the early days of revolution, of a shocking death of his parents, of his own past as a rake and the gout that now cripples him. There’s something of the carnival barker about him, banging his drum and announcing the mysteries and turns the book will take and it almost gets irritating. Lofthouse has a remarkable skill in knowing when to drop a small revelation just as the reader (or at least this reader) was on the verge of being frustrated with the whole endeavour.

The central villain of the piece is a Lord who has been betrothed to Emilia called Smellie. Much is made of this name and Emilia spends a good few chapters imagining what a fat, farting, obnoxious sort of person a Lord Smellie must be. When he turns up he is something very different, a Macaroni. These were hyper-fashionable young men who set out to shock by their over-the-top clothes, make-up and wigs, their affected speech and their practiced mannerisms. This particular Macaroni turns out to be a particularly nasty piece of work but there is a disgust of such people that taps into fear of clowns (never trust a painted smile) but also one which taps into a threatened masculinity. Part of the point of being a Macaroni was to revel in excess and play with gender and both characters are particularly disturbed by this.

Many things happen in this book, some very shocking, even grotesque. There are quotes from Shakespeare throughout but it borrows most from (possibly my favourite) play, The Winter’s Tale. In theory, we reach a happy ending but the world presented in this book doesn’t seem like one where anybody can be very happy, at least not for long.

Particularly as I write about this book, I admire it but I didn’t really enjoy reading it. Despite the opulence in many of the locations, there’s a grunginess to this book, a deep-seated ugliness which is no doubt intentional and made me feel the way it wished me to feel but which didn’t grip me. Despite the betrayals, tricks and shocks, I found the book dreary and a little po-faced, like it was trying to challenge me in some way. Perhaps another time I would have really taken to the book, found it’s determination to make me feel mildly queasy to be bold. It’s very possible that my catching this year’s tummy bug as I read it may not have helped but I am left with a book I can recognise the quality of but which felt like a slog to read.