The first two pictures that stood out seemed to belong to two sides of one person. I have named this person Mr Steele and he is the main antagonist of the piece. 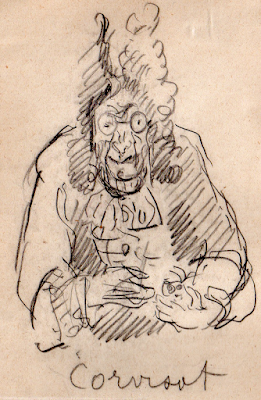 Rather like Jonathan Wilde, and the fictional Mr Peachum, Steele works for and against thieves. He has an official position as a thief-taker, where he stands up for the rather shaky law and order by recovering stolen items for a price and giving hangable information to the magistrates for a bigger price. However, he is also the leader of London’s largest gang of thieves and anyone who doesn’t steal enough is sold to the magistrate for hanging. Mr Steele also has his fingers in other pies, racketeering, conning and any profitable bit of mischief usually has Mr Steele somewhere in the background, an untouchable spider in his web.
He seems impenetrable, with the semblance of law in the palm of his hand, all powerful. This is made grotesque by his physical weakness and decay.He looks mummified. A dry, desiccated, withered old man with sunken eyes lined with grey skin, his forehead has the same colour and texture of uncooked mince that has been left on the side for too long. In public he puts on his armour, a large, thick wig and faded red silks but in his lonelier moments it is clear he is sick and infected, an infection he seems to spread to everything he touches, making it sick itself. 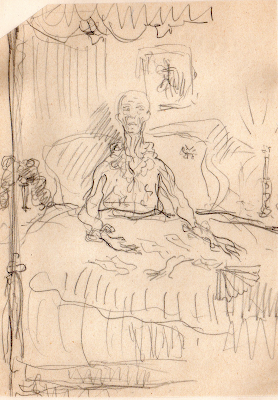 Unfortunately, Sidney, our hero naively stumbles on Steele, becoming a huge thorn in his side and dent to his pride until a series of accidents cause Steele to become obsessed with him. Steele plays his best hand, sending Sidney to the gallows, will Sidney escape?
...you shall see by the end of the year.

An Update-ette on the shaving.

Today I look like the victim of a mugging. 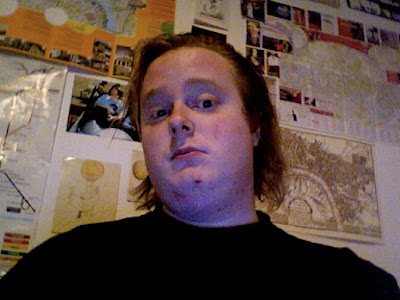 Blood on my chins and a razor slash across my cheek. That aside, still the most comfortable shave I've had in ages...
Yours

Email ThisBlogThis!Share to TwitterShare to FacebookShare to Pinterest
Labels: Experiences, Something Silly 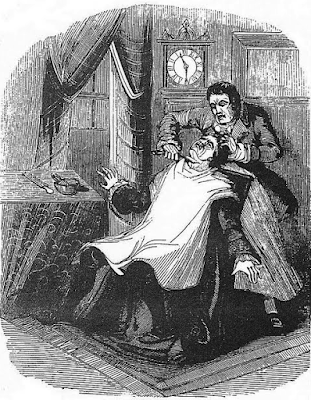 Sweeney Todd was first introduced in the Victorian pulp book 'The String of Pearls' by James Malcolm Rymer. Although a nineteenth century creation, Rymer set the story in 1785 on the junction of Fleet Street and Bell Yard, where a secret passageway linked the barbershop where Sweeney dispatched his victims and the shop where Mrs Lovet turns them into pies.


A pub now stands on that junction called 'The Old Bank of England'. It is a Fuller's pub, selling their ale and also specialising in a certain kind of pub food...

Of course Sweeney Todd was not based on any historical case (as much as the grisly minded may hope) but Fleet Street, as well as any fashionable thoroughfare would have had a number of striped poles indicating barbershops.
We know that fashionable gentleman like Boswell paid for three shaves a week, as well as minor surgeries and wig maintenance but there was also a growing trend as the century went on for self shaving. By the 1770s a range of companies started to sell a range of scented products for shaving as well as new and more accurate razors. Indeed, the development in metallurgy that fuelled the growing industrial revolution also aided the production of fine razors. A more detailed essay on the subject can be found here.
I bring this all up because I have recently purchased a starter kit for straight razor shaving. It is a whim I have long had but indulged recently with this inexpensive and complete kit from amazon. I have only shaved myself for a second time and already my technique is improving...I have only sliced myself once. When it works, it truly is the nicest, smoothest and least irritating shave I have ever had and where it doesn't work; well, I prefer the feeling of a clean cut to a nagging itch.
So, with this little experiment in eighteenth century living started, I bid you adieu. 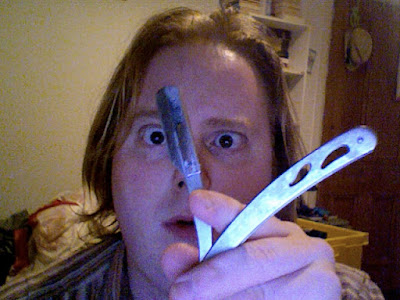 Not one of the sketches this, but a Rowlandson.. it depicts a miserable Grub Street writer with what I presume to be a bailiff behind him. Which reminds me, my rent is due. 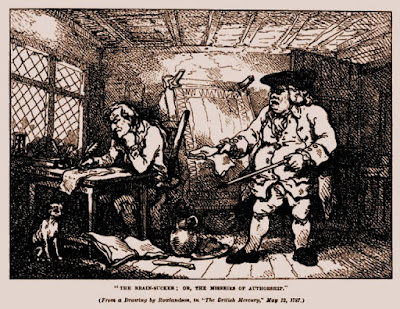 Better nip off then.
All yours

Email ThisBlogThis!Share to TwitterShare to FacebookShare to Pinterest
Labels: Art

Into the Big City and the mysterious pictures.

A few years ago I was in a bad place; between jobs, owing money to everyone and living off five pound a week for travel, food and entertainment. In between being ignored for simple jobs and going to bed early because I was hungry, I looked at advertisements for the ‘arts jobs’ government mailing list.
One of these was for an interesting web project, and although it was unpaid it offered a share of any profit (and the possibility of a free cup of tea) so I went. What was asked for was 12 episodes with a 4 act structure each, written in the style of a hyper descriptive script. The idea was the reader downloads the script and reads it accompanied by a specially written soundtrack. The idea sounded novel, I had lots of time on my hands and I liked the lady running it. So, I signed up to the project and instantly forgot about it.
So a month later I find myself panicking that I have no idea to show the lady, the night before I get a sudden brainwave and a whole character and situation starts to form in my mind. It starts with the idea of getting some writing use out of all the eighteenth century stuff I had then started reading and developed into a very (very, very, very) rough form of the story that is becoming my next novel, ‘Into the Big City’.
I was on my way to the meeting with the lady and not having anything better to do, made a morning of getting there, wandering around the streets where I was lucky enough to find ten pounds on the floor. I decided to spend the ten pounds on something completely useless for good luck, I decided on a picture and so I went to one of my favourite browsing streets, Cecil Court. I also went into a shop I have always wanted to buy something from, T. Alena Brett. It is a picturesque shop, covered in piles and piles of old prints and owned by a very eccentric and enthusiastic lady. The shop was her dad’s and she knows all the ins and outs of her stock, never needing to add to it in her whole time there. She is not a fan of browsers but I managed to sneak in and look around. On a sort of mezzanine/balcony type bit of there was a hand sketch of one of the characters I had written about the night before. As I looked through there was another, and another and some more characters that all looked like they belonged together. I bought as many as I could afford and went to the meeting.
The lady loved the idea and the pictures and I set to writing. Unfortunately, my involvement with the project fizzled out by the third ‘episode’ (as they were called) because I found the style of the hyper-script too strange a medium and the requirements she had for four cliffhangers in 20,000 words to be a little false, but the idea stuck and I knew I would tackle my eighteenth century novel one day.
Now that day has come, I returned to the shop today and picked up some more of those pictures. They are pencil sketches, on cheap paper and one of them has an address for a French hotel typewritten on the back. Many of the pictures are details of things, but some full characters. The lady at the shop, who knows everything about her stock, knows nothing about the provenance of these pictures.
In the next few weeks I will post one or two pictures and post a written character sketch of someone from ‘Into the Big City’ to go with it. I will leave my newer purchases till last so the characters can grow around those images.
So, till then...
Yours