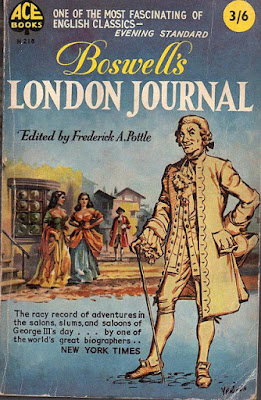 One of the great pleasures in reading a diary is that it is possible to look up what the diarist was doing on the same day. 254 years before the Dr Johnson Reading Group discussed Boswell’s London Journal; Boswell was frantically writing it deep into the night, accidentally snuffing his candle and wandering around, trying to find a light and fighting his deep fear of the dark. (The candle is thankfully ‘relumed’ by a passing watchman calling out the third hour.)

‘The London Journal’ is a bit of a surprise to someone who has mainly met with Boswell through his ‘Life of Johnson’. This Boswell is 22, feckless and desperately self-conscious. He is as eager to please as he is in the ‘Life’ but there he has the Johnsonian goodies and a lifetime of experience, here, he is a wide-eyed boy on the make.

This is his second London trip. Having gadded about Scotland, got a woman pregnant and generally been a nuisance, he managed to convince his disapproving father to give him a small allowance to go to London with the aim of getting in the guards - a career he chooses because he would get to wear a nice coat and mostly hang about London being dashing. This is his record of his time negotiating that position, enjoying his time in London and trying to meet a few famous people on the way.

Young Boswell is acutely aware of his own self, especially when it comes to the different social characters he can put on. We are constantly reminded that this is the age of politeness and that Boswell would like to see himself as a rational gentleman of sophistication and poise. We are also reminded that Boswell himself is a puppyish young man who seems to cycle rapidly between mania and depression.

He is deeply divided: Not only between his light and dark sides, but between his desire for spiritual sustenance and his desire for bodily expression. He is divided between duty to his family and his duty to his own inclinations and he is divided between England and Scotland. Only 20 years after the ’45, some of his friends had property confiscated after the rebellion and Scotland is still seen by the English as a foreign pest. Johnson’s jabs seem mainly in a spirit of good fun but the heckling of Highland Officers at the theatre show the Scottish to be something like foreigners in the city. Like many immigrants, the Scots seem to club together, many of Boswell’s daily routine is spent with groups of Scottish people, whom he seems to both enjoy the company of but also deride as ‘mameish’ and ‘hamely’.

So, what does a young man with little to do enjoy in London?

We have the theatre. Nearly all the people Boswell talks to have an opinion of the stage. Boswell and his two mates Dempster and Erskine (as opposed to his friends, Temple and Johnston) write a book where they tear apart a play because they don’t like the author. They also attend the play on the first night to boo it, but can’t get the audience on their side. Boswell also almost gets a chance to write a prologue for a play, and is miffed when it is not used. He gets to eat with Garrick, the most famous actor on the stage and he also dates an actress, Louisa.

The courtship takes a month. An actress is not the same as a trull, she can’t be picked up from the streets and Boswell would rather not spend the money. However, she is not a noble lady either and will ‘put out’ with the correct procedures. After elaborate arrangements involving rented rooms and pseudonyms, Boswell finally has his night of passion with Louisa. He then finds himself going off her, even more so when he contracts gonorrhoea where he writes a truly ugly letter to her, demanding a loan of money back - and proceeds to complement himself on being full of the ‘milk of human kindness’.

It is this sexual side of Boswell that put some of us off. His role playing extends to his sex life and he pretends to be various people - it is when he pretends to be a ‘blackguard’ when he loses sympathy - using the role as an excuse to force himself on women and, at one point, to gather a crowd to shame a prostitute who wouldn’t go with him.

And here we have the final divide in him; a charming and amusing companion who knows he shall be great if he can only just work out what at - and a pestering, thoughtless craver of sexual pleasure. Can we excuse his youth? The age he lives in? Perhaps… but perhaps being allowed into the real life of Boswell may cost the reader a little more then they bargain for. 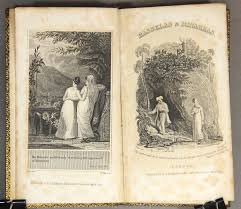 It was while I was looking for a slimmer, more pocket-comfy version of Rasselas for the Samuel Johnson bookclub that I found an edition that paired it with this book. Imagine my delight when I discovered that it was a sequel written forty years later by a woman Johnson had known as a little girl.
I’d have thought Rasselas was an impossible novel to write a sequel to, aside from the fact that it’s barely a novel, the conclusion in which nothing is concluded is a brilliant way to conclude it. Imagine my surprise when, in the notes, it explained that a sequel to Rasselas was actually Johnson’s intention. What’s more, that he actually planned for a happy ending! Typically, Johnson never finished his own sequel - partly because no booksellers paid him in advance for it, and partly because he couldn’t properly conceive of a truly happy ending - so Ellis Cornelia Knight decided to give it a go instead.
In this sequel, Rasselas, Nekayah, Pekuah, Imlac and the astronomer all go to Abyssinia where they are holed up in a castle run by Amalphis, his daughter Zilia and son Dinarbas. There are shenanigans involving invading Arabs, Rasselas’s brothers breaking out of the Happy Valley and enacting a coup on the Emperor, and a naughty Sultan. At the end, Rasselas becomes Emperor of Abyssinia and marries Zilia. Dinarbas becomes Client-King of Serbia and marries Nekayah… I’m not sure why the book is named after Dinarbas either.
This is a book that is more interesting to think about then it is to read. Knight writes a sequel that never meets the original on the same page. Johnson’s was a slightly ponderous, plot-deficient examination of different modes of life, with the conclusion that none of them can ever be utterly satisfying - Knight’s is a sentimental tale of brave men and patient women which ends off with everyone paired off and happy. At the end, Rasselas wants to warn people against seeing the world as ‘a scene of inevitable misery’, all ills can be borne with a clear conscience and a good spirit and happiness is possible.
I found this the parts that showed that Knight had read and taken in Rasselas, and had disagreed with it most interesting. The characters re-visit their dreams from the previous book. They understand that those dreams will not bring uncomplicated happiness but decided to pursue anyway - only Rasselas achieves his dream (and that through the death of his Father and three brothers). Nekayah and Pekuah declare their former dreams to teach as childish and are very happy with being a wife/Queen of Sebia and her maidservant.
Knight also criticises Johnson’s inability to talk at a person’s level. At one point, Rasselas is captured by Arabs and as a prisoner finds himself in the company of young men that he upbraided in the first book as well as some shepherds (which Johnson had used to put two barrels through the pastoral dream).

Rasselas learns that he can’t just bellow people into goodness, nor can he reason them into it but he needs to look at things from their perspective, learn a little kindness and tact - advice Johnson may needed to have heard, (Though to be fair to the man, he was aware he could come off as a little brusque and did make some efforts to fix it, not necessarily with success, but with good intention).
My favourite objection was directed deep into the very heart of Johnson’s project. Rasselas the book is all about ‘The Choice of Life’ where Rasselas the character gets to explore different types of life. Knight sticks it straight in the middle of that, most people don’t have a choice of life, most people are simply plonked into life and have to make the best of it. As Amalphis says, ‘I am amazed how you should have ever imagined that happiness depended on any particular station in life’.


I have to admit that I found Dinarbas a rather dull book to read. The plot, though tight, is not particularly surprising and the writing style is rather stiff and faux-archaic. I can’t tell whether the stiff writing is supposed to be in imitation of Johnson but if it is, it doesn’t really work. However, I find some of the objections to Rasselas’s lessons to be valid and there is a thrill in having some of Johnson’s assumptions taken to task. I will maintain, however, that the conclusion in which nothing is concluded - is still not concluded.