After all, it’s been;

So I thought I’d use the opportunity to make a countdown of my top ten favourite pieces I’ve written for this blog and explain why. 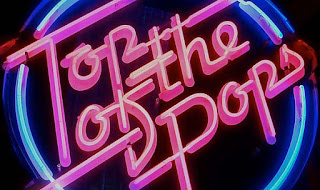 (Number 11 would be my two part gush about Tom Jones, part one and two)

Not my best piece of writing in any way, this is a short excerpt of my 18th Century pastiche novel, ‘Odes to the Big City’. I originally posted it in the nano-wri-mo forums because I thought it was a funny little snippet that put across the tone of the narrator. I later found out that I’d been sampled on a tumblr compiling ‘shit nano work’ and lightly mocked. They took great objection to my cheap three-cornered hat.

However, the reason I include it is because this is the most commented piece on this website. Not that the comments are genuine ones, they are almost all bots advertising locksmiths in various places. It’s not a place for scintillating comments but it’s a wonderful place to find a locksmith.

I’ve included this piece as a representative of the various performances I’ve reviewed on the blog. This is one of the stranger things I’ve visited (and I’ve seen a one-man show of Tristram Shandy), a dinner-performance inspired by the Spectator magazines. I dragged along my sister because no-one else would come. I think I represent the shaky start, the unusual food combinations and the way the night fell into place as it continued. The tale of the dodgy pirate night is true though…

8: Behind the Scenes at the Museum of London

Since 2015, I have been attending, and writing-up, the Dr Johnson’s Reading Circle in Gough Square. I've only missed one for the stupid reason that I forgot what day I was in. Rather than including a write-up of one of the events, I thought I’d include one of our trips out.

The Museum of London is one of my favourite museums and there was a real thrill of being allowed backstage. Combine that with the utter pleasure I had listening to an expert talk engagingly about a topic I don’t know much about and I was a very happy bunny. I think the joy of the evening radiates in the writing and I love the photo of me peering up a potentially deadly dress.

7: Under the Glass...Three - Castles in the Air

The series ‘under the glass’ is probably my most favourite. I love how a quote can be detached from context and used as a way to look at life. By accident, these pieces have probably become the most personal on the blog as using a quote to look at my life reveals something about it.

I had difficulty choosing which particular ‘under the glass’ to choose. While ‘we never are abandoned, quite’, is probably my favourite quote, I’ve picked this piece because it’s probably the most personal. I am still constructing my castle in the air and I still hope it is hanging together as a piece.

I’m pleased to say that over the ten years I have been writing grubstlodger, my personal situation has become far more comfortable and secure. I’ve even picked up little successes for my writing, occasionally receiving nice little comments for my write-ups and having written things I’m proud of. I still hope for more of course.. but who doesn’t?

I’ve visited a number of wonderful places with eighteenth century links but I’m probably proudest of my two entries on Bath. (Cheating I know).

I’m particularly fond of the flow of these pieces, the way the ideas develop and the way they successfully put across my experience of the city. I don’t know how these come across to a reader, but for me, they evoke a wonderful couple of days very successfully.

This entry started out as a tangent on my review of ‘The Fatal Tree’ and spun itself out into it’s own piece. It came at a time where I happened to read a number of works that had employed ‘flash’ slang into the texts with various degrees of success. I was puzzling over how to turn a spirited and interesting tangent into it’s own piece when I overheard bravura explosions of modern slang whilst on a train to Staines. I wish I’d written down more of what they’d said, as the control and skill of the language was something I could never replicate.

It was also in writing this piece that I properly understood what it was that had worked or not about the slang in the books which gave me pointers on how to handle slang in the future and helped me to remember how great properly expressed slang is. It’s a t’riffic piece.

I needed some Sammy Johnson talk in here somewhere, and my initial review of Rasselas is one of my more favourite ones. Looking back, I’m surprised how definite my conception of the novel is and how it doesn’t completely match other people’s view of it. I still maintain there’s a lot of laughs in Rasselas if you look at it right. What’s more, this is the piece that lead to one of my strangest ‘real world’ experiences connected with the eighteenth century.

I distinctly remember attending a Gresham lecture, being a little early and sitting on the floor of a corridor with a book as the other attendees started to gather. They were of retirement age, with fluting ‘well-schooled’ voices and each looked at me with surprise and distrust. I was not welcome at this lecture. What’s more the lecture itself started with an assertion about Johnson I simply do not agree with (that he was a misanthrope) and then proceeded to give the most surface-level readings of him and his work I could imagine. Most talks on Samuel Johnson have a few laughs, this did not. Then came Rasselas and I started to warm to the talk. The lecturer was far more positive about it, finding little moments of fun and jokes in it much as I had. Indeed, many were the exact same ones I had found. Then this image of a pyramid came up. 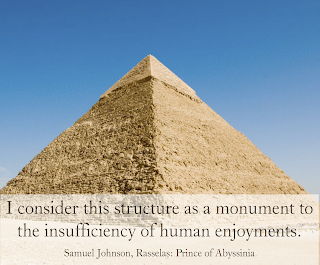 I recognised that, the mis-centred text, that’s clearly one of my shoddy works. What’s more, the whole Rasselas part of the lecture seemed to agree with me and be rather out of place with the rest of the talk.

When I left, I was viewed with as many side-eyes as before but I left smug in the knowledge that the best part of the lecture had come from me. (Though it may have been a coincidence and the lecturer may have just found and used my image from google).

Like many people, 2020 wasn’t exactly my most productive year. I’d started it full of high hopes of finishing the first draft of a novel by Easter, and as Easter 2021 has just passed, I am nowhere near this goal.

Yet I did tackle this beast. It pretty much took me the year, dealing with it in three main chunks. I’d taken a lot from it, filling page after page with notes and quotes but how was I going to organise this most digressive of works into a sane and readable piece?

I think I succeeded, not only that, but I think I get across the feeling of progression that comes from reading the whole book. If anything, this piece is here to remind me of how I have developed as a writer, being able to organise my notes and ideas and express them clearly. This piece reflects my greater skill and also the greater confidence I have in being able to wrestle a beast down and re-present it fairly.

I also love how the review builds to the same beautiful conclusion that Montaigne came to, that ‘life is its own objective’. It’s a message that I think is important in general, but in the strange non-year that was 2020, I feel it was more important still.

2: Bethlem Museum of the Mind

This is the review where I first managed to understand, for myself, what I want from an exhibition and first started to be able to talk about them in a way that goes beyond listing the interesting ‘stuff’. It’s when I first realised the (probably obvious) point that an exhibition has a throughline, almost a story.

I was struck with how the museum didn’t present itself chronologically but thematically and how this choice meant it argued the rather disturbing point that although we know more of how the brain works, we haven’t really progressed very far in the field of mental health at all. We may not chain people up but we put them under chemical restraint, we may have a vast lexicon of medical-sounding words but they are no more specific than old playground taunts, we still don’t know how to make people happy. It’s a sobering thought and persuasively argued and I’ve found more chronological exhibitions to be a little insipid since.

When I agreed to take an overnight bus to Scotland to clamber up Ben Nevis on a whim, I knew it would provide some material. Yet, when it came to write it, I was blocked. Though the piece itself took an evening to write, it took a month for it to shuffle together properly in my mind. As a placeholder, I even had a request to send trepanning tools because there was something worthwhile lodged in my head and I couldn’t get it out.

If all my grubstlodger writings were wiped off the face of the earth with only one piece allowed to survive, this is that piece. It does what I’ve always wanted this blog to do, to unite my reading in (and of) the eighteenth century with experiences of my own modern life.

In comparing my long, tedious struggle up the mountain, overtaken by all members of the ‘going up community’ with Samuel Johnson's views of life, I think I have ended up with a piece that touches on something universal. Like my walking up the path, sometimes we live each day simply because that is the thing we are doing. The experience of reaching the summit and feeling absolutely nothing but a kind of watery disappointment and the knowledge that it’s just more trudging to get down, is one that is embarrassingly common when we reach our goals - as Samuel Johnson said, we move ‘from hope to hope’. It’s a dour piece but probably my most thoughtful and fully realised.