Bethlem Museum of the Mind - a trip 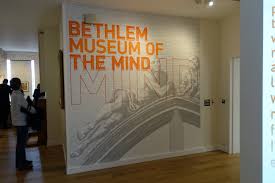 I seem to be quite obsessed with the idea of delusion and self-delusion, particularly in how a certain level of self-delusion is good for a person can be spill out and become bad. Of my three finished and one un-finished novels, delusion plays a bit part in all.

The first was about a teenage boy who falls in love and takes advice from his imaginary friend, my second about how the population at large delude themselves that there is a suicide disease, the third is about a young man who believes he is the greatest poet who has ever lived and the fourth about a group of people who create delusions in other people using a fantastical machine. Of these books, the third has a number of chapters in 18th century Bedlam, and the fourth is inspired by the delusions of one of the inmates there. So it seemed like a reasonable trip to visit the Royal Bethlem Hospital where they have a gallery and a museum of the mind.

Now in it’s fourth incarnation, the hospital has a collection, which was rehoused last year in the former administrative building and given a huge facelift.

On entering the building, there was a little shop on the left and an exhibition of artwork by a current service user (as I learnt the phrase is) to the right. I liked the art; some abstract expressionism, some ecological stuff, some notepad doodles - all of it too expensive for my pocket. I particularly liked one called ‘Field’ which was a huge canvas, consisting of many carefully spaced green lines, the notes said they were to remind me to notice each blade of grass and they did.

Into the hallway there’s a grand flight of stairs and flanking the stairs, the ‘Brainless Brothers’. A pair of statues sculpted by Gabriel Caius Cibber (Colley’s dad) representing manic and melancholy madness. Manic is strained, held down by chains but I thought Melancholy has a little smile on his face. His position was later mirrored by Hogarth in The Rake’s Progress. It was moving to see these two figures, formally the symbol of the eighteenth century Bedlam and to consider all the souls that passed under them to their various fates.

Upstairs there was also a choice of gallery to the right and museum to the left. I chose the museum.

It’s not a huge space but it is well used, with many interactive and audio-visual displays that actually engaged and helped the message of the museum, rather than being a distraction. The museum is also displayed in themes; visiting Bedlam, diagnosis/labelling, treatment and recovery.

The visiting section had a large screen which mixed historical accounts of visiting Bedlam to modern people talking about going to the new site for school trips, to walk the dog, as patient, as nurse and as museum visitor. It made me wonder whether my visit was any different to those people who want ‘to view the lunatics’ in the eighteenth century. There was also an original Moorfields collection box, a replica of which has received my two pound donation.

The diagnosis/labelling section was all about how naming a mental disorder may go some way to helping, or hindering. There were phrenology photographs depicting what a ‘typical’ melancholy or delusional person should look like, there were Wain paintings of cats that became increasingly psychedelic and may have shown an increase in psychosis and there were three incoming patients books. One from John Munroe’s private madhouse in 1766, one for the 1850s and a blank one that new service users are encouraged to write in on committal.

There was also a large desk with an inset monitor displaying a history of rude names and terms, when you clicked on one, it gave you an etymology. I learned that:

I wasn’t sure whether I was supposed to be feeling angry at the insensitive language or impressed at the wide range of linguistic diversity.

There is a little bit about humour theory, a very nice light show with the four humours colour coded and projected, There is also a blank ‘reflection’ space, I didn’t need it because I can reflect in non-designated zones.

The next area is about therapies, this is split into three sections. The first is about restraint, there’s a padded room which was recently de-commissioned and four audios playing from two nineteenth century letters and two modern testimonies. There is also the information that The Royal Bethlem Hospital still has some padded cells in operation. The next cabinet has a selection of restraint devices; from strait-jackets, to manacles and chastity devices. Looking at them and remembering that they were really used to hold people down is a moving experience. Interestingly, these are placed next to examples of chemical restraint and a modern electronic-tag worn by modern Royal Bethlem service users.

Further on there are some electro-shock devices and related paraphernalia together with a documentary about the short term benefits and long term drawbacks of the process. Next to that there are examples of modern arts and craft to show modern therapies.

Finally there is the section on Recovery. This includes ‘before’ and ‘after’ photographs and letters from past patients. The final item is a painting called Recovery? which features a very sad face.

That’s when it hit me what had been bugging me. In presenting the museum thematically it seemed that I was being told that eighteenth century madness and today’s mental illness are in essence the same thing and that the treatments today were little more than modern updates of the treatments of the past. Instead of a chronologically based story of the improvement in the understanding of the mind and it’s ailments, the message was that nothing has essentially changed. It was strange, a far more challenging message then I was expecting.

I was thoroughly provoked by my time in the Bethlem Museum of the Mind, I was sad that I was the only one there - you should go, it’s free and can be Oystered from London. 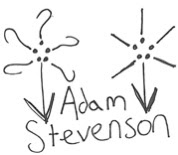