I had the delightful pleasure of being on the train to Staines last week. There I overheard a  most mysterious conversation. Alas, I didn’t have my notebook on me to write it all down but I recall them discussing a distaste for the feds, a desire to set up a k-tent to encourage all the k-holers to spend bare p’s on the k’s. They shared stories of their own k-holes, one describing himself as having once had a jaunt down a k-canyon.
I say mysterious, I could understand what was meant and I had heard most of the terms before; but the fluency of it, the stringing together of so many slang terms in a rhythm completely different to my own, was something of a revelation.

Normally, hearing the British police being referred to as ‘fed’s’ irritates and reminds me of the children I work with who, at the age of ten, aren’t aware that 911 isn’t our emergency number and that dollars will do very little for them in a shop. But hearing this group, was like hearing the language of the street brought to a perfection. Their speech was virtuosic, poetic and generally fantastic - but without someone to write it at that very peak, we’ll be left with the dregs of their patter. There needs to be some kind of spy, to record what they hear. 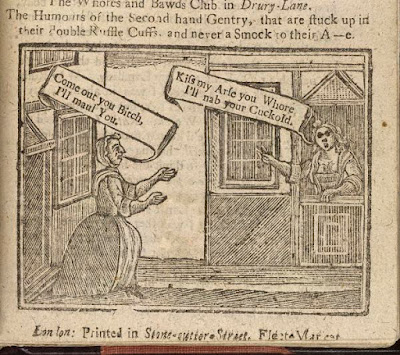 The early eighteenth century had such a spy in Ned Ward, the London Spy. One of the real pleasures of him, and his regional copycats like the York Spy, is the sensation of overhearing genuine street-speech in all its colour. How else would we hear the tour-de-force insults of the Thamesmen such as,
‘You were begot by huffling, spewed up and not born, and christened out of a chamberpot.’ Nor its rejoinder of,
‘You shitten rogues, who worship the fundament because you live by turds.’
However, it would be foolish to accept such reports without question, Ned Ward and his like were consciously creating entertainment. They were not anthropologists, or members of a mass observation group - there must have been craft in their reports of everyday speech.
London had long been fascinated with its underclass, particularly the way they spoke. Robert Greene’s coney-catching pamphlets reported the tricks and language of Elizabethan beggars and thieves for a shocked middle-class audience. Dictionaries of criminal slang, beginning with 1699’s ‘The Canting Crew’, predate and outnumber the dictionaries and wordbooks of standard English. There were also ballads, pamphlets of criminals’ last words and the Newgate calendar which all employed cant in various ways.
I have copy of that first slang dictionary and it is interesting the words that have survived from 1699 cant. If your lugg-holes are open and your gob is shut then you may be a dabb hand at eavesdropping such words in ordinary patter.
Nor did cant stay only in the ephemera of Grub Street. Gay’s ‘The Beggar’s Opera’ includes cant terms in the songs and dialogue as well as the names of the characters - Jenny Diver, Betty Doxy, Ben Budge, Nimming Ned and Jemmy Twitcher all have names originating from cant terms for various lays (or criminal practices). Fielding’s ‘Jonathan Wild’, dealing as it does with criminal matters, also uses it.
Again, it’s interesting to wonder how closely all of these uses, both from Grub Street and the more esteemed literary circles, actually reflect language as it was spoken. If the eighteenth century speakers were anything as inventive and interesting with their language as those I overheard on the train to Staines, then it is unlikely a few instances, or a dictionary of words could really capture the language of the canting crew.
What’s more, in a time where common people had fairly small stomping grounds and few means of mass communication (especially among the less-literate) it is probable that each job, each area and each individual criminal corporation had their own way of using slang. Add to that, those that have passing acquaintance with those who used it, and those who mixed it with other vocabularies (like the sailor’s argot which even the linguistically nimble found hard to decode) it is likely that what we have is only a poor shadow of the exciting language use of the eighteenth century underclasses.


Such language is, however, a very easy tool for modern novelists to use when they want to add a little urban, eighteenth century gangster flavour and many of the novels I have read recently have used it in this way.

‘Golden Hill’ and ‘Slammerkin’ both front-loaded the texts with cant to put them in the eighteen-century frame of mind but were kind enough to either explain the meanings directly by means of internal monologue or an innocent character asking for definition. ‘The Virtue of this Jest’ used cant as a vibrant painter would with a bright colour, splashing it about all over the place.

The book I am currently reading…has a problematic relationship with cant. The entire book is written in it, but it feels like it was written by a computer with a criminal cant setting instead of standard English. There is no feel for the ebb and flow of the words, an individual’s use of their own cant or the way some people hide behind their slang and the way others use it to show off. It’s cant as wallpaper, and that is pure flapdragon.