Trip: A Visit to Bath (Part One)

When notable people entered Bath in the eighteenth century, bells were rung to welcome them. I can’t say any bells were rung to herald me as my train pulled into Bath Spa station, but sitting in bright sunlight, the sweeps of stone houses were very welcoming indeed.

I went to the city to get a bumper eighteenth century experience, to soak up the ambience, hunt out second-hand bookshops and visit as many museums as possible. Bath is one of those places that reflect one particular moment in history; where London is a dizzying mess of influences spanning over a thousand years, Bath is (with one very notable exception) a city that was born, flourished and pretty much remained stuck in the long eighteenth century.

The question of why Bath’s eminence didn’t develop into the twentieth and twenty-first centuries was not one that I was particularly aware of until so many people that I talked to offered up theories without my asking. It seems all the residents had been thinking about the subject heavily.

The man at the Postal Museum believed the answer was based in Bath’s unique political situation as a hotbed of Patriot Whig politics held by people like Ralph Allen with Prince Frederick as the figurehead and when the Prince died suddenly, all the political importance of the place fled. The woman at No.1 Royal Crescent felt that Bath was too egalitarian, driving the Prince Regent and other influencers to Brighton. A man at the Museum of Bath Architecture felt that so much of Bath’s beauty was built in such a short span that the city grew complacent and didn’t keep up with the times. The man in the pub thought Bath traded too heavy on its Georgian past, sucking the life out of new developments. Whatever the reason, I had a great time playing in an eighteenth century playground. 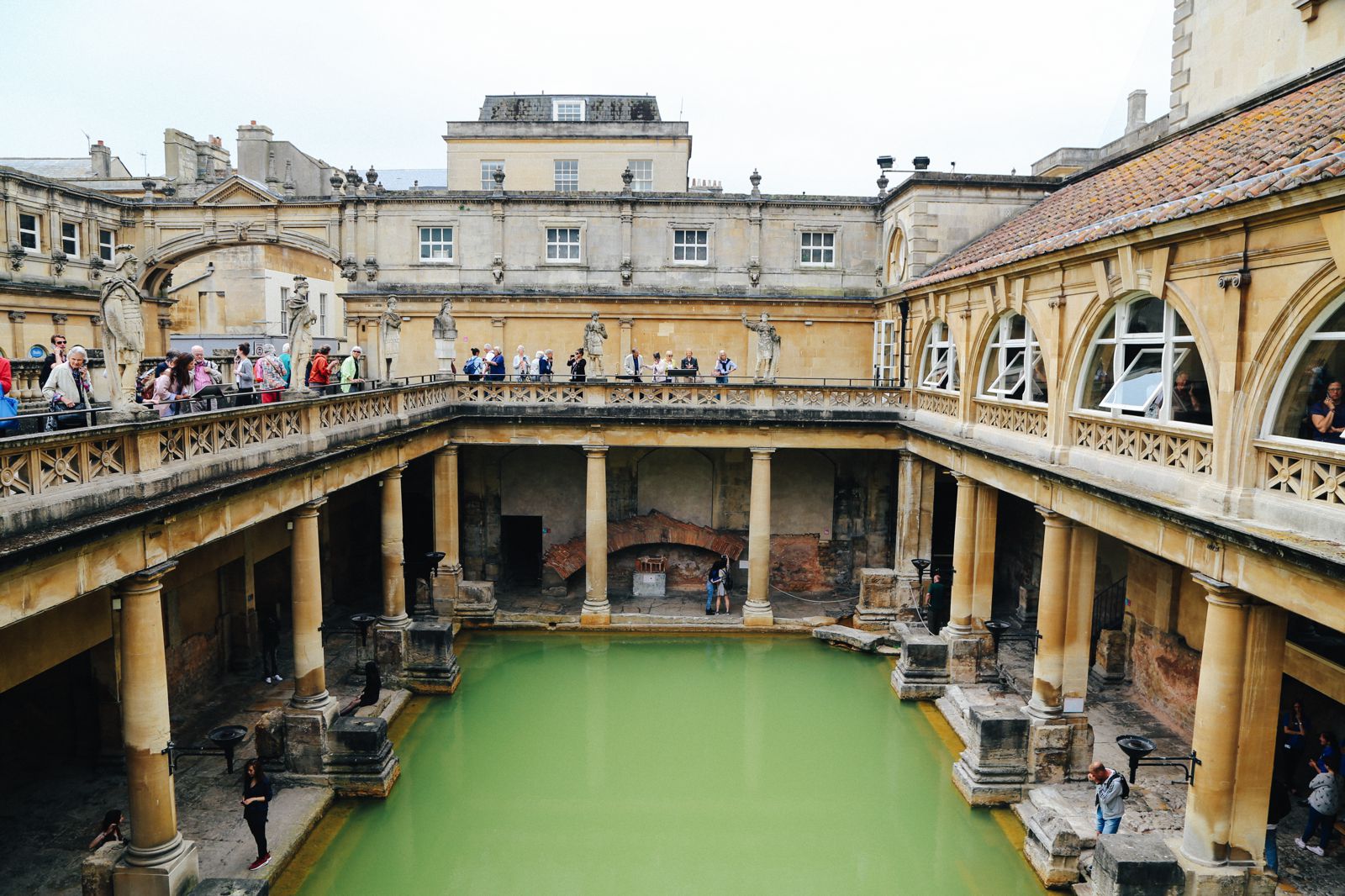 My first museum visit was to something which wasn’t primarily eighteenth century. While there was the main King’s and Queen’s baths in the same location, the eighteenth century builders didn’t find the remains of the vast Roman baths. It wasn’t until the nineteenth century that those were excavated and a viewing gallery built in a Roman style. I found it very interesting that the iconic image of the green water, the columns and the open sky, with the Abbey behind it, is not really Roman at all. The bath originally had a vast arched roof which meant that sunlight didn’t warm the waters and turn them green.

It’s undoubtedly the most popular attraction in the city and is laid out very well. The visitor first takes a walk around the top of the terrace, looking at the famous main bath. They are then taken down, through exhibitions showing the importance of the bath as a social and religious centre, another on the daily life of Roman Britain, then down into the bath itself and along the original square, then out into the main bath again with options to explore the other rooms.

The route means that there is a glimpse of the famous part of the bath, with the lingering wish to see it closer delayed by the other parts of the tour, building suspense. There were some great things on the way, a huge Neptune-esque head, sacrificial altars, the famous curses thrown into the waters - there were two problems though. One is that the exhibition rooms are simply too cramped and winding to cope with the sheer number of visitors. The other was the audio guide.

A good audio guide can really heighten a visit but this one detracted. One of the problems is that there are too many audio stops, it meant that the already busy crowds would block the route at inopportune moments creating a deeply unpleasant and claustrophobic atmosphere. The other was that the adult guide didn’t seem to be written for adults. The modern statues around the viewing gallery were described as Romans who had ‘a special relationship with Britain’, the same ‘special relationship’ the Vikings had with Jarrow. The word ‘special’ came up a lot, there was a building called a Tholis which looked like a large bandstand. The only description the audio guide gave was that it was a ‘special kind of temple’.

That said, guide or no guide, crowds or no crowds, there was something magical about walking along the ancient street, over the courtyard to the massive (and well worn) steps to the main building. There was a delightful pettiness to the curses and a tremendous feat to the hydraulic engineering - it was worth visiting despite the flaws.

Sadly, I didn’t get a chance to go into Bath Abbey, because there are memorials to Beau Nash and Sarah Fielding in there. I was delighted by the outside though, particularly the side that was next to the queue for the Roman Baths. It shows two huge stone ladders going to the top with angels climbing them, I’ve never seen something quite so playful and was very taken with it.

I wandered the streets a little, spotting metal plaques along the way, marking the various people who lived and stayed in Bath. I also saw a ghost sign for a circulating library, which made me smile a great deal.

I didn’t plan on going to the Postal Museum, it felt a little too niche even for me. However, when the sign out the front mentioned ‘Ralph Allen,’ I was intrigued. I only knew him as Squire Allworthy in Tom Jones and Fielding’s great patron - I didn’t realise that he bought the postal routes that didn’t go through London and set up the first regular post service. Nor did I know that with the proceeds he bought stone mines which he sold cheap to grand projects, enabling the Bath that is there today.

It’s not a large museum but the volunteers are interesting and voluble and there are a few great things in there. It includes Allen’s contract for the service, the first royal pigeon mail, handbills for services, postal trumpets and a model for the first mail coaches. There is also a selection of letters (including one cross-written to save space) and an Alice and Wonderland stamp case that was officially licensed by Lewis Carroll. I also learnt that a ‘slow-coach’ was the one that carried heavy packages.

It was a niche museum, but a perfectly nice little one and well worth it for the chat alone.

The Circus and Royal Crescent

It had been a beautifully sunny day and had reached that point of a summer’s evening where everything glowed golden, the perfect time to visit two of Bath’s most famous sights. The Royal Circus, built by John Wood the Elder is far bigger than I expected. With the houses on all sides, it does feel like being in the Colosseum, but with each floor displaying a different order of column. Watching people saunter round it made me feel I was participating in something thousands of people have before me.

I found the Royal Crescent even more impressive. Built on a rise, the view flows down to a Victorian park. There was a large grass space out the front on which people were sitting, chatting and playing with their dogs. The light hit the warm stone in such a way that it’s hard to describe how peaceful everything looked. I walked around the crescent looking for metal plaques, my favourite was the one commemorating the house from which Elizabeth Ann Linley eloped with Richard Brinsley Sheridan.

Sitting with a picnic out the front of the Royal Crescent and watching the sun go down was a very soothing end to my first day in Bath, especially when followed by a few local beers and a chat in a pub just round the corner.

The next day was when the real museum visiting would happen…