I awoke early the next day to get to as many museums as possible. 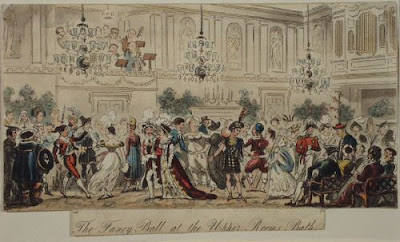 The Assembly Rooms and Fashion Museum
I was lucky enough to be staying very close to the Assembly Rooms which also houses the Fashion Museum. These rooms were finished in 1771 by John Wood the Younger and are the rooms pictured in pretty-much every later eighteenth century and early nineteenth century novel, if you’ve seen an adaptation of ‘Northanger Abbey’ or ‘Persuasion’, you’ve seen them. A few days after my visit they were set to be a location again but I couldn’t find out what for... I later found it it was being used for Bridgerton.

The rooms are large and elegant with huge crystal chandeliers. Walking through them, it’s very easy to imagine the good nights out and rough mornings afterwards. There’s a room called The Great Octagon, as octagons go, it’s pretty great but its no Rushton Triangle Lodge.

The Fashion Museum told the history of British clothes from 1500s to the modern day in 100 items. Complementing these items were highlights from the collection of the Worshipful Company of Glovers. These included gloves belonging to Elizabeth I, James I, a cosmonaut and Luke Skywalker.

There was a decent, but not essential, audioguide and the museum told its story really well. Walking along, the visitor could see the development and then relaxation of the three-piece-suit from the doublet and hose. The first item was a Tudor Shirt, followed by examples of the Restoration suit, some eighteenth century examples and then the simpler, more form fitting versions pioneered by people like Beau Brummell. As the museum reaches the modern day, the examples of male dress diminishes as it becomes less interesting. While the fuss of the full Macaroni outfit (and they had one there) might be ridiculous, I think modern men have missed out on the opportunity to display themselves in a more varied manner.

The dress had a different evolution, they went from fussy to very simple, then grew in intricacy and then back to simple again. I particularly liked the Austen-esque white, gauzy numbers though I did feel sorry for anyone trying not to spill wine on it.

Half way through the journey was the obligatory dressing up section, but this blew any others out of the water. There were so many ages and styles to try on and mix and match and if I hadn’t been eager to get to the other museums on my list, I could have created some powerful concoctions.

Fashion is in no way my area, I am too clumpy and lumpy to ever display clothes well but I really did like this museum. While the Roman Baths are a required visit and another museum was my favourite, this was my second and people visiting Bath without popping in are missing out.

My next visit was through The Circus to the Royal Crescent and the museum there. This was one of my main reasons for going to Bath, having followed them on Twitter for some time and keen on seeing it.

The museum started with a cheesy but charming video about one of the previous occupants, Henry Sandford, a rich Dubliner who retired to Bath for several years. The house was set up to recreate what it would have been like in his time and we were encouraged to wander upstairs and downstairs to see how the household lived and were organised.

There were a number of guides, both costumed and uncostumed who explained the rooms and pointed out objects of particular interest. I had a nice chat with some Dutch people about the spiky plants on the chairs, placed there to encourage people not to sit on them. The Dutch people said they’d never seen that before and we wondered why it has become such a staple in British museums.

My favourite object in the house was the cabinet of curiosities, mainly because it had a drawer labelled ‘dog’s teeth purse’ which included exactly that. I also really liked the satirical prints on the walls though I wondered if that was really something a well-to-do person would have on walls rather than in books to share after dinner.

What with the velvet ropes and vigilant guides, I felt rather restricted in the house, everything looked like it wanted to be touched but had signs next to it saying not to. There was a little more freedom downstairs, which were so plain and simple after the opulence upstairs. Instead of furnishings and paintings were simple morals and rules painted up on the walls. I had never considered before how access to colour depended on wealth before.

I was ultimately a little disappointed in No1 Royal Crescent, I found that setting it up as a time-capsule but restricting interactions with it made it quite a cramped experience.

Lunch-time was approaching but I, being a steadfast individual (and having had a large breakfast) went on to the Herschel Museum of Astronomy. It’s in a little back-road just off Queen’s Square, where Beau Nash erected the giant pillar to Prince Frederick and asked Pope to write a truly uninspiring inscription.

A thin house in the middle of the street is home to the museum and was home to William and Caroline Herschel. In this house, they both had a flourishing career in music; discovered comets, the planet Uranus and infra-red light as well as created the finest telescopes then in existence. One of the things I found most charming is that the museum leases out the top two floors as flats, and that is how they keep going. I’d love to live in a flat above a museum, especially as I didn’t see a separate entrance, so the tenants must go through the museum to get home.

This museum also started with a video, but this was a funny, charming one narrated by Patrick Moore. It reminded me how amazing the siblings were and how much I miss Patrick Moore’s reassuring voice telling us that we ‘simply, don’t know’.

The next part of the museum had a signed picture of the Apollo 11 astronauts, my second house museum to have this in a month (the other being Newton’s house). This room led to the workroom with the stone floor still cracked after an accident creating lenses for one of the Herschel’s telescopes. There were examples of lenses and of one of the polishing machines they used.

A modern conservatory next to it had some of William Herschel’s notes explaining his experiments on sunlight. He passed light through a prism and used a thermometer to discover that the area just beyond the red colour zone grew hotter. He called it invisible light but it was later known as infra-red. Did you know toasters heat up bread through infra-red rays? I didn’t.

Then out into the garden where they discovered Uranus. The video had explained that the planet as as far from Saturn as we are, so the discovery doubled the size of the known universe. It was strange, standing in the narrow garden, hearing someone making tea in another house and children playing in a garden further down, that such a discovery was made there.

The top floor was more about the Herschel’s as people. The stairs up featured satirical prints of the siblings, including a really bizarre one of Caroline finding a comet by sniffing its farts.

The first room featured more scientific instruments, from an astrolabe to tiny pocket globes. There were William’s notes from a visit to the Boulton Factory and Caroline’s visitor’s book to the large telescope in Slough. The next room displayed there musical talents, William was an organ player and also played in Bath’s various balls and concerts, where Caroline also sang. There were tickets and instruments and one of Caroline’s dresses - she was tiny.

I loved this museum, it was my absolute favourite. There was such a relaxed, homey atmosphere to the place and a real sense of two incredible people doing amazing work in their spare time from a cramped house. It’s not a large museum but it packed the biggest emotional wallop.

The Museum of Bath Architecture and the Star Inn

This one was a trek from the last, up a hill and past the Assembly Rooms. It’s housed in a chapel built by the Countess of Huntingdon to entice dissenting preachers like Wesley and Whitfield. I had seen her black cape earlier in the Fashion Museum.

The museum has different sections explaining the process with which the building in Bath were built. I can’t say I found these particularly interesting, never having been mechanically minded. I was taken by the section on John Wood and his belief in the mystical story of Bladdud. A mythical king, he suffered leprosy and noticed his pigs getting better in a spring. Bathing in the spring, he got better and decided to build his town there. Wood loved this story, feeling the area was tied in with Celtic and mystical origins and he loved a but of mysticism, seeding the town full of masonic symbols - even The Circus leading down to Gay Street is shaped like a key from the air.

The main reason to come to this museum is to see the huge model of Bath built by the university. It took thousands of hours to build and is very impressive.

Close by was the Star Inn. Built in 1760, it’s a lovely dingy place with pump-clips on the wall and three separate rooms all sharing the same bar, it’s also where the modern Bath Ales started. I had a few pints of plum porter and even managed to buys a small pot of snuff. I had a very interesting chat with some American tourists taking themselves on a historic pub crawl and with a regular who told me the story of a local pub which found Roman artefacts while being renovated and paid the builders to keep quiet and dump it all. It’s a pub story though, I’m sure it’s not true - perhaps.

Finally I took myself back to the baths to the Pump Room. The centre of Bath life in some form or another from the early 1700s, this building was built in 1799. There is a statue of Beau Nash, a painting of him and a statue of the mythical Bladdud.

For the price of an overpriced London Burger, I had a very nice meal of a rosti, bread and salad whilst listening to a man playing a piano. I also finally tried some of the famed water. Sam Weller was right, it tasted of;
“I thought they'd a wery strong flavour o' warm flat irons.” It really does.

I throgoughly enjoyed my little trip to Bath. If I were to go in a day, I would say the Fashion Museum, Herschel Museum and then a meal in the Pump Room - but, that’s just my choice.