When Samuel Johnson was asked whether he thought the Giant’s Causeway was worth seeing, he said it might be, but it wasn’t worth going to see. Similarly, as my friends and I hiked up Ben Nevis, we saw a group coming down and asked them whether the summit was worth the journey. ‘No,’ they said, ‘it’s shit.’

Shit or not we carried on walking to find - but that part can wait. 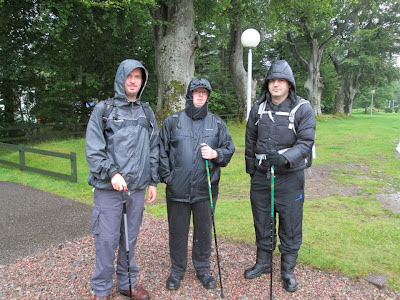 What was I; a fat, unfit, ill-equipped lardarse without the fondness for  beige that defines the hardcore outdoors type, doing half way up a mountain in the first place?

A question I am still asking myself. At first I thought it was for the story, but I quickly pulled away from that idea. Any person who has to climb a mountain for a story is probably the wrong person to tell it. Then I thought maybe I climbed the mountain for the same reason people often read classic works of fiction, so I could then tell everybody I have climbed it. While it is true that I have enjoyed telling everybody I know about my little adventure, it’s not that either.

I suppose I went because I was having that feeling where I wanted to go outside and knock people’s hats off their heads. It was that damp, drizzly November of the soul, having sat around not writing enough of my next novel as I would like and receiving as many agent rejections for the last novel as the young Harry Potter received Hogwarts invitations. Times like that, it’s best to do something unexpected.

Lucky for me a friend suggested something unexpected about the right time and so I found myself in a damp field, wearing a pair of holey Doc Martins and some ancient jogging bottoms. 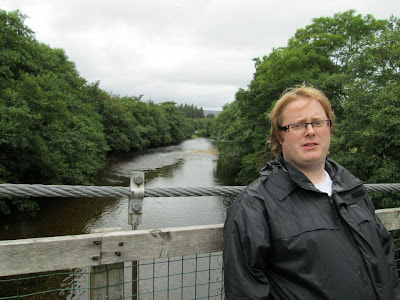 On the Bridge, realising.

It was as we crossed the bridge leading to the Ben Nevis path that I realised I hadn’t actually seen the mountain, only the big hills which the mountain hid behind. The mountain itself was just round the corner and behind the clouds. I was already wet at this point, Ben Nevis is in Scotland and Scotland is wet.The feeling of sogginess was one I had to get used to.

A little after this I realised the main gist of the mountain climbing experience, a lietmotif that would carry on throughout my time going up and down mountains. That leitmotif consisted largely of walking and rocks. Most of the time we would be walking on rocks although for variety there were occasions when we would walk over rocks or even, when it got really exciting, around rocks.

Which reveals the ultimate truth of hiking up mountains as I see it. In its combination of strenuous activity, repetitive stepping and never ending toil, it is an incredibly boring way to spend a day. After a while, you get fed up of adapting the lyrics of Jerusalem (‘And did those feet, for eternal times, walk upon Scotland’s mountains rocky?) or reminding yourself with Yazz and the Plastic Generation that ‘The only way is up’ and then your mind delves somewhere deeper.

My mind turned, as it often does, to Samuel Johnson and his uniquely pessimistically optimist take on life and living. This is the man who said that ‘life is more to be endured than enjoyed’ and also that in life we move ‘not from pleasure to pleasure, but from hope to hope’. Although I had read these phrases, I am a sunnier soul than Samuel and it took an experience like trudging up Ben Nevis to really feel the pessimism of his philosophy but also the substantial grandeur underneath. 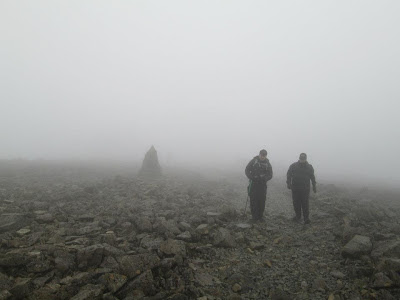 Samuel Johnson’s experience of life and mine of the mountain are rather similar; with the exception some brief glimpse of some stunning vista, it is a seemingly unending drudge over obstacles that are overcome more out of habit than pleasure. I began to feel, in a way I only feel in my darkest moments the effort and drudgery that it took for him to plod onward in his life, pulling after an unwilling body.

Certainly my body was unwilling. We were on one of the hills before Ben Nevis, a hill I named ‘Ben Piss-Me-Off’ that my chest started to ache whenever I did something foolish like breathe in. The first part was also the worst. The path was uneven and pushing my legs over every clump of rocks sent pain shooting from the knee down. We were almost up the smaller hill, a quarter of the way to the top and I was ready to give up. It wasn’t that I knew I couldn’t climb to the top, I am such a stubborn git I can do most things, it was that I wasn’t sure I wanted to climb to the top anymore. It was then we met the group coming down who told us it was shit.

Samuel Johnson wanted to give up many times. One of the worst of these wobbles was during the writing of the Dictionary when his wife Tetty died. He wrote to Boswell that he felt that he has ‘broken off from mankind’ and proceeded to sit by himself for several months. Eventually it was the companionship and help from his friends that brought him out of his depression and finishing his Dictionary. For me, it was the thought that if I did want to go down then one of them would feel obliged to go down with me and I couldn't disappoint one of them like that. So I, like Samuel Johnson kept trudging up.

As we climbed the one element I had been really enjoying, the peculiar and stunning view of the valley and other mountains started to disappear behind a mist that wouldn’t clear for another eight hours. As I trudged I looked out at the grand vista and saw nothing but white. There was nothing left except white sky and white rocks and more mountain to plod my way up. I was no longer climbing because I was enjoying it, or that I was particularly eager to reach the top or even because I wanted to have reached the top. I was climbing simply because that was what I was doing. I found myself growing slowly blanker and blanker. After a while I stopped looking for a view, I lost any curiosity or interest. I just walked. 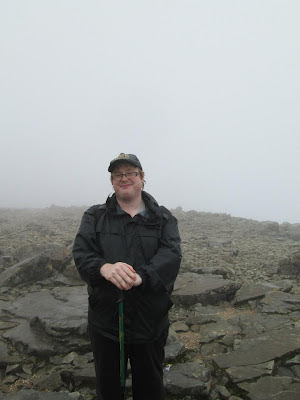 The joy of white.

However, as much as I kept walking, people overtook me. All people. Whether they were old, young or canine, the rest of Ben Nevis’s going up community trotted away past me. I began to feel extremely jealous of those people, knowing they could stop sooner than I could. Samuel Johnson often felt people were overtaking him in life. There is the famous anecdote where Johnson is distraught when a man tells him that were he born to a richer family he could have become a Lord and Johnson screams at him not to tell him that now it’s too late. Goldsmith used to play up to being a terrible envier of others, but Johnson would remind himself that...

"Such is the state of every age, every sex, and every condition: all have their cares, either from nature or from folly; and whoever, therefore, finds himself inclined to envy another, should remember that he knows not the real condition which he desires to obtain, but is certain that by indulging a vicious passion, he must lessen that happiness which he thinks already too sparingly bestowed." 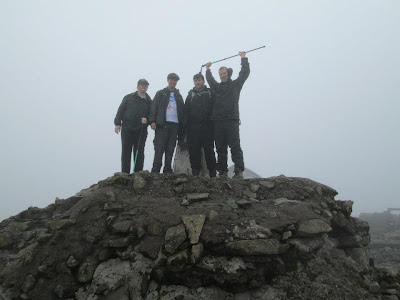 Samuel Johnson resolutely tried to live his life with its end in sight. This was very much the same strategy I had in mind on the way down, imagining a sturdy, steady pint to gulp at the end of my labours. However, the end Johnson had in mind was not necessarily this longed for reward. He considered it morally arrogant to assume that heaven would open it’s arms to him and death was something he was aware of concretely and feared bitterly. This led him to conclude that not only are we stuck, trudging our way up our mountain but that we could fall off at any moment. Images of chasms fill his writing.

Luckily, by the time I had that pint in my hand, all chasms were behind me. In front of me was only rest, relaxation and sleep in a grotty sleepingbag in a draughty tent in the rain. Yet in another sense, I am still trudging on.