Review: 'Murder by the Book' by Claire Harman 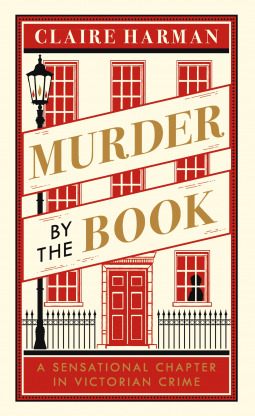 A few months ago my Mum sent me a message asking me if I was watching ‘The One Show’. The answer was of course no but she told me they were talking about a book I might really enjoy. She said it was about how some writer with a really long name who wrote books about highwaymen was implicated in a murder. When I asked her if it was William Harrison Ainsworth, I said yes and then told her it was that author I’ve being going on about recently. So, I cranked up my BBC iplayer, put on ‘The One Show’ and watched the little section, even though it was presented by Giles Brandreth.

The work discussed was, of course, ‘Murder by the Book’, by Claire Harman, an author  like very much for her Fanny Burney biography. It tells the true-crime of Lord William Russell’s murder, and the way the murder impacted an argument about a certain sort of book and one book in particular, ‘Jack Sheppard’.

I’m no great true crime lover, I found ‘The Suspicions of Mr Whicher’ to be padded out with unnecessary detail and I would suggest that this book is too. Added to that, the crime lacks a certain sense of sensationalism and the route to discovering the murderer is not a particularly gripping one. (This is until the end, where Harman gives a postscript of unanswered questions which could change the crime quite significantly). What gives this book its hook is the discussion of the moral panic surrounding Harrison Ainsworth, ‘Jack Sheppard’ and the Newgate novel.

There have been recent worries about violent video games, video nasties and hard rock but before that, there were worries about violent novels and plays. The Newgate novel takes its inspiration from the ‘Newgate Calendar’, collections of works about thieves, murderers and conmen hanged at the infamous jail. The difference between these and other sensationalist retellings of criminal life, is that the reprobates are often the heroes of the story.

This means that in ‘Rookwood’, Dick Turpin is a noble romantic who bursts in and takes the gothic story over now and again and in ‘Jack Sheppard’, the eponymous hero may start out with a wild streak but actually has a heart of gold and a code of stone - most of his terrible crimes and most famous escapes happen in the novel so he can save other people from the villainous Wild. Wild in this book is an out-and-out villain, with a secret lair containing souvenirs of all the men he has had killed and a secret torture room.

I knew young Dickens and Ainsworth had been pals, but this book shows how close the two were at one point. They set out together, with a person called John Forster in what they called the ‘trio club’, determined to crack the literary scene. The break-out success was Ainsworth, funny, extremely handsome and generous with his success to aid Dickens into finding his own big break. ‘Jack Sheppard’ was Ainsworth’s second novel and built on the popularity of the Dick Turpin bits in ‘Rookwood’. It was an instant success and ran in Bentley’s Magazine, alongside Dickens’ own efforts at thieves and vagabonds, ‘Oliver Twist’.

Some of the things I learned about the creation of the book include the fact that Ainsworth’s forays into criminal ‘flash’ slang, (which has heightened some books and sunk others) were borrowed from reading criminal memoirs. His immersion in the world was so complete that former criminals wondered whether he had actually been one of them.

Another thing I learned was that Ainsworth wrote in a way that was intentionally bad. I have often said that he is a writer who has a wonderful flair visual and dramatic ideas but doesn’t have the same flair with words, it turns out that this is intentional. “The truth is,” Ainsworth wrote in a letter, “to write for the mob, we must not write too well.” He even advised Dickens from showing off too much and to keep it simple. I had always assumed Ainsworth couldn’t write all that well (and maybe he couldn’t) but I never knew that he chose not to.

The book was such a success it spawned seven plays at once in the West End. This couldn’t happen now but the copyright laws about page-to-stage were looser then. Some of the shows highlighted comedy, some visual spectacle and the one at The Adelphi (now showing ‘The Waitress, which is very good) had it all. The description of the performance in the book make me wish they would revive it.

The trouble was, crimes popped up all over the place with the criminals declaring that they had been inspired by ‘Jack Sheppard’, whether in book or play form. When the murderer of Lord William Russell claimed the same thing (possibly as a smokescreen for other elements of the crime), Ainsworth’s reputation took a huge hit from which he never fully recovered and Dickens, who had distanced himself from the Newgate style, left him in the dust.

The last few chapters dealt with the murderer’s execution. Although Ainsworth didn’t go, about a quarter of London did, including Dickens and Thackery. Dickens had himself written hanging scenes in ‘Oliver Twist’ and Thackery, yet to be famous for ‘Vanity Fair’ had been writing vicious parodies of the Newgate Novel style. Both this men were deeply moved and shocked by the affair, Dickens watching it from an upstairs window and Thackery from the crowd (though he covered his eyes at the fatal moments). Thackery wrote a scathing description of the hanging, calling for it to be done away from public eyes, a call that Dickens took up later. The book implies it was certain people going to this hanging that led to the end of public hanging altogether.

There was also a nice bit about fingerprint analysis…….

To be honest, what I really want is a good modern biography of William Harrison Ainsworth, but this partially scratched that itch, painted a picture of a very modern moral panic and told the story of an intriguing(ish) crime, all told in a clear and engaging way.