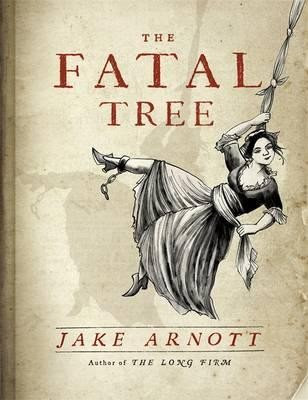 If this book were a person in the eighteenth century they would be hanged for theft, which is no bad thing in itself - it was an era of theft and people have thieved from it ever since.
The Newgate Calendar, which emerged from penitential ‘last-words’ stories became the Newgate Novel, with writers such as Dickens and Ainsworth “borrowing” from the criminal legends of the eighteenth century. This tradition of stealing continues today, with ‘Slammerkin’ and ‘The Virtue of the Jest’ being two examples I’ve looked at this year, not to mention my own Grub Street/Covent Garden/Newgate novel ‘Odes to the Big City’.
However, the key to being a good thief is lightness of touch and ‘The Fatal Tree’ is such a botched theft that it becomes something quite criminal.
It is broadly the story of Edgeworth Bess, accomplice and muse to Jack Shepherd, delivered in her own words. We follow her entry and acclimatisation into London’s criminal underworld and her struggles, torn between the cruel authority of Jonathan Wild and the reckless liberty of Jack Shepherd. I was very excited to read this, the story of Jack Shepherd, whose short but illustrious career as serial prison-escapee and symbol of London defiance is always ripe for a novel. Ainsworth wrote a novel about him and inspectors in the nineteenth-century were dismayed that more schoolchildren in London had heard of him then Nelson.
I was also excited that this was from the perspective of Bess, who comes into the traditional narrative as a temptress but also an inspiration, a burden to one prison escape but the key to another, and Jack’s firm partner in crime but also the person who peaches him to the authorities for her own freedom. She should be a complex and intriguing character.
Unfortunately, the character of Bess in this book is just cribbed from other eighteenth-century prostitute tales. The thefts come thick, fast and obvious in the beginning; we start by lifting from ‘Moll Flanders’, proceed into the first picture in a ‘Harlot’s Progress’ and continue into ‘Fanny Hill’ - and so we continue, with barely a scene or moment that hasn’t been borrowed from some other book.
Towards the end, Bess feels guilty of her actions and regretful of her past, but this is mainly conveyed by inner voices (in italic) repeating nasty things about her. We never get her sense of an individual, nor do we get any sense of agency. Bess is merely thrown this way and that because that is what these sorts of women in these sorts of novels do.
Jack Shepherd is also let down by the book. We are given a sense of manic energy, he is often described as a ‘fiery angel’ and there is some feeling for the lack of self-confidence he suffers that charges his independence and later vanity - but the central relationship between he and Bess never quite gels. This is partly through Arnott’s choice of phonetically representing Shepherd’s s-s-s-stutter at every opportunity.
Which leads us to the key to the book’s failure, its (mis)use of eighteenth-century slang. I touched on this in the cant piece below, but the truly clod-eared use of slang in the book is something that sinks the book utterly. I said before that it seems like the novel was written in standard English but then translated into cant by a computer programme.
The reason for this is that the author doesn’t seem to realise that people use slang in their own ways and even those who use great swathes of slang do not choose the slang term at every single opportunity. Just because a person has a slang word for ‘eyes’ or ‘stairs’ doesn’t mean they only use those words every single time they want to describe eyes or stairs. In this book ‘eyes’ are always ‘glaziers’, ‘stairs’ are always ‘prancers’, ‘tea’ is always ‘prattle-broth’ and a bad feeling (whether it’s morning sickness or grief) is always ‘crank’.
We simply don’t get the opportunity to enjoy the romance of Bess and Jack, thrill to Jack’s prison escapes or feel hatred to Jonathan Wild because the whole thing is mired in the gloop of canting verbiage. It becomes a tremendous slog.
However, we do get a silver gilt to this black cloud, while the main story is painful to read,  the sub-plot is very interesting. It’s about the (fictional) writer who Bess is telling her story to. Being a literary man he writes the parts about himself with a far greater flexibility in his use of slang and releasing this stranglehold of patter makes it more enjoyable.
It also works better because it’s a less-told story, the secret life of a molly - a member of London’s gay subculture. As well as his times in the mollyhouses, he is also a conman in Wild’s employ and a friend of John Gay (who may have been had leanings that way himself). None of it was new to me, Arnott’s key sources ‘Mother Clap’s Molly House’ and ‘John Gay: A profession of Friendship’, both books I reviewed on the precursor to this site. T

he thefts from these books are less then subtle; many of the Gay scenes has the man quoting bits of his own (twentieth-century) biography and the mollyhouse scenes and characters are ripped right out of Rictor Norton’s seminal work on the subculture. But, with the exception of the TV show ‘City of Vice’, I had never seen them in a work of fiction, which kept my interest in most of these bits.

Again though, the writing choices let it down a bit. These sections are phrased as letters from the author to Applebee a (factual) publisher of last words. This means that when Applebee’s actions enter the book, the author often tells Applebee of his own recent action. All I could imagine was Applebee reading it and saying ‘I know I did that, it was only last month’.
I bought this book at full (over)price from Foyles, pulled in by the subject matter, the reading list at the back and the beauty of the cover design. I have to say, it was the biggest letdown in a year that (so far) has not provided me with many books I have really enjoyed.

(I did appreciate the Christopher Smart shoutout though.)

Next week I am off to Dr Johnson’s house to discuss more chunks of Boswell and the week after, I am going to read Casanova - whilst in Venice.