Was it only last summer I was reading Rookwood?

Last summer when I was snuggled in sheepskin rugs in a large teepee, having feasted on cheese toasted on a fire and swigs of single-malt whisky. There, I snuggled with the crazy, over-the-top story of curses and storms, highwaymen and gypsies, secret brothers and secret wives.

I was keen to dive back into Harrison-Ainsworth’s crazy world and decided that Jack Sheppard was the way to do it.

The historical basis of the book is the same one that has inspired The Beggar’s Opera, Fielding’s Jonathan Wild (which I’m sure I reviewed), Lucy Moore’s The Thieves’ Opera, The Virtue of the Jest, The Fatal Tree and my own Odes to the Big City. 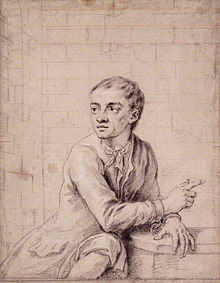 Jack Sheppard was a poor boy who had a strong yet thin physique and several years experience as a carpenter’s apprentice. As such he was a skilled housebreaker - however, he was also very easy to capture, having a tendency to hang around the same places and exciting the ire of London’s main criminal mastermind Jonathan Wild.

This led to him to discover his real talent - escaping prisons. His go-to tactic was to smash through the roof, using a blanket to catch the debris before using the blanket to lower/parkour himself out into freedom.

One memorable occasion has him doing all of this whilst carrying his mistress Edgeworth Bess, who was twice his size. Sheppard also indulged in a spot of classic cross-dressing, sneaking out of the prison in women’s clothing á la Mr Toad (though a hundred-odd years before).

Having broken out of London’s most notorious prison once, he did it again in a complicated series of actions, breaking through the empty parts of the prison in a sequence which would make a great film. Unfortunately, he was caught again a few days later and the last time he didn’t escape. (Although, there is a theory that he had a plan to be brought off the scaffold and revived, a plan which didn’t work because the crowd stopped his rescuers retrieving him, thinking they were doctors wishing to anatomise his body.)

The morality of Jack’s life isn’t clear enough, let’s add a Hogathian two apprentice sort of thing, but lets make them secret brothers, but lets also make them secret earls but one of them is a marquis, and let’s add the ’15 rebellion and the great storm of 1703. Let’s have Blueskin be an adored follower of Jack and have Jack as a king of thieves, lets stick his mum in Bedlam for a bit, let her be an heir snatched by gypsies. let’s have an action scene in a rain-drenched boat around the feet of Old London Bridge. Let’s make Wild nastier, lets have his hatred of Jack personal and not just business, let’s give him a villain's lair with a secret killing room and display cabinets with the bones of his victims, let’s make him practically bullet-proof, sword-proof and telepathic. And a love triangle! We need a love triangle! &c. &c. &c. 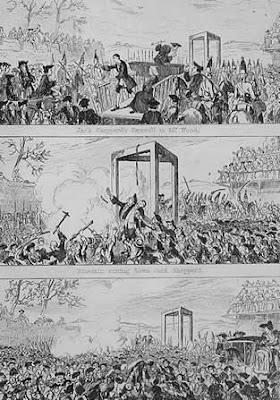 Essentially, this is Ainsworth at his most delightfully Ainsworthy.

There’s nothing quite as wonderfully peculiar as the cave/monk cell/wood/gypsy/forced marriage with highwaymen and curses as there is in Rookwood but unlike that book we have a clear villain and he is the most delightfully evil character. It was in this book and about him that the phrase ‘Napoleon of Crime’ was uttered, not Moriarty. He has a full-on Bond villain evil base - he has evil laughs and evil stares and an unnerving habit of appearing in all the most unfortunate places. Technically, he kind of wins, despite the best efforts of everyone else. This should be a sad end but he was so entertaining, it wasn’t.

For a hero, Jack Sheppard was not an unlikeable wet-lettuce character - although he doesn’t control much of the opening, he develops into a lively but unthinking robber into a repentant who goes to heroic lengths to protect those he loves. All those escapes, they weren’t to save himself - they were so he could convey important information to other characters or meet or rescue them from Wild’s dark dungeons. Those easy recaptures - they were all due to the fact that he had to keep returning to obvious places to warn other characters.

There was a little of the slang and balladry that could have weighed the book down - but as the game of cat and mouse between Sheppard and Wild began the story didn’t have time for all that. It did, however have time to evoke elements of London just fading from living memory when this book was written in 1839 (with very evocative illustrations by Cruickshank - which I didn’t get to enjoy in my copy, thus missing a lot, apparently).

In a chapter on Bedlam, we get quotes from Tom Brown, Ned Ward and The Dunciad. As a resident of Willesden, the frequent descriptions of it as a country idyll, along with the isolation of Dollis Hill and the beauty of the Harrow Road (where the author lived and is now buried) made me laugh a lot.

Whilst I wasn’t expecting Rookwood again, I was hoping for a Rookwood-like experience and this book exceeded my expectations. It’s no masterpiece, but it outsold Oliver Twist on pure fun alone… that’s saying something.