Simon Forman - the book, the art exhibition and the video game

Simon Foreman was a physician in the late 17th century who practiced despite not having all the official training and none of the official paperwork. He focused largely on astrological/humoral causes of illness and largely proscribed changes in lifestyle, diet and various concoctions of herbs (though sometimes it could become a little more peculiar, like burnt dog mess). He also slept with many of his patients, even after he had married. We know all this because he kept a diary and detailed case notes.

I’ve learnt about him in some peculiar ways. I think I first discovered him via twitter, where I follow a lot of accounts about the early modern period. Through this, I was led to a conceptual art exhibition in a basement, a computer game and finally, a book. I’m going to through these things. 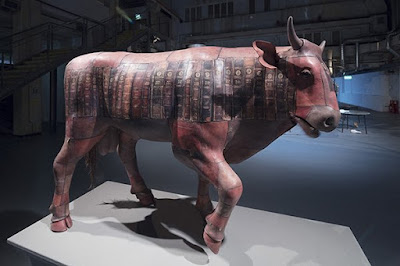 My first proper introduction to Simon Forman, and probably the strangest one.

I am not particularly adept and reading art and modern/conceptually type stuff is even further away from my comfort zone. So when I went into what looked like a carpark under a building on the Marylebone road, I was a little put out. The space was ugly and dark and grim, there were few people around and I had to duck through a rubber curtain to get to the main space. It felt forbidden.

In the middle of the room was a large mechanical arm, draped in greenery, in a pond and surrounded by pots. I still don’t understand what this had to do with Simon Forman, but the artist who makes it likes putting mechanical arms in things. Near that there was a large collection of pots and a big finger - a pointer towards the more alchemical side of Forman’s oeuvre, though I was still at a loss to really understand what it was trying to tell me.

I found the works more engaged with the subject matter to be more interesting. There was an AI, programmed with astrological information that told me I had Venus Envy and a large leather cow that repeated parts of the notes. I loved the cow, it was funny and informative and I was very interested to hear all the people’s complaints and illnesses, together with Forman’s treatments. I spent a while with the cow.

The other must interesting work was a video, shown on three large concave disks. It featured an actor telling parts of Forman’s life from his diaries but also mixing it in with the actor’s life. It was all about impossible affairs, guilt, pride at healing, hubris - and all other manners of feeling. I was left moved, touched by the human behind all the notes and star charts.

To be honest, I left the whole exhibition convinced that there was something interesting there but not really sure of what it was. I needed a more obvious way to get into the Simon Forman story.. I kept my eye on Twitter. 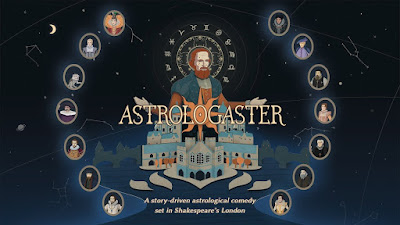 Although I hadn’t pursued anymore of Simon Forman’s story, I hadn’t forgotten about him and a postcard from one of the pages of a casebook sits in the notebook I write my Dr Johnson’s Reading Circle Notes. But a couple of months ago, my Twitter blew up with him again. This time it was about… a computer game.

Again, I am not particularly knowledgeable when it comes to computer games. I used to love a bit of ‘Monkey Island’, was a dab hand at ‘Worms’ and occasionally play ‘Civilization’ but the last console I bought was an Xbox, and that was mainly because it also played DVDs. Checking that I could get it on my computer, I downloaded ‘Astrologaster’ and played it straight through one night.

In the game you play Simon Forman, various querents come to you with problems and you read their stars. The game mechanic allows you to look at between two and four vague astrological pronouncements and you have to pick the one you’re going with. Your decision then either makes your patient happy or not - sometimes it may make them initially happy but angry in the long run or vice-versa. If you do really well with the women and love hearts will glow above your head and an affair can begin. Please as many patrons as possible and you can gain your very own medical license.

For someone way out of computer games, it was a pretty simple idea and fun to do. Not only did you read the stars, but there were clues in the symptoms and actions of the querent when they first start talking to you. This means that you could give advice based on what you really thought might help the person, or based on what you think that person may want to hear. As such, you got to dabble between up-to-date 17th century thinking or go full quack.

Even more fun were the range of people, the characterisation and the introductory songs. Each time a person came to your door, they had a song about them. Some, like Dean Blague were religious catches that usually ended in insulting him. Others teased the beauty, the cunning or the stupidity of the querent, always with gorgeous harmonies. My favourite set of songs were for a man called Signor Ferrero, because they had more than a hint of ‘that’s amore’.

I’ve played the game through twice now and it was managed to make me laugh out loud on multiple occasions. I also had fun at seeing how my different choices bent the game in different ways and I look forward to playing again and doing everything differently.

What’s more, the game has a lot of history in it. Many of the characters were actually people from Forman’s Casebooks and many of their problems were problems that Forman was asked about. The characters who were not historical (or like Lord Essex, were historical but didn’t meet Forman) brought real historical ideas to the game. There was fear of Catholics, of foreigners, of the plague as well as belief in witches and all sorts of marriage difficulties and considerations. Even the stars used are as they were on the dates given.

I felt like a learned a lot (and had great fun) playing the game and now I really needed something a bit more authoritative to tell me about the man and his life.

Dr Forman: A Most Notorious Physician (2002) 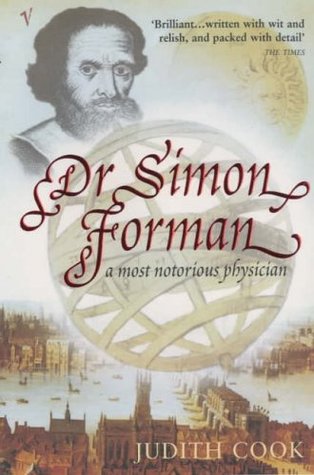 This book came out before the exhibition and computer game, it’s the most accessible way of discovering Simon Forman but the last I came across. It’s written by Judith Cook who wrote a book I very much enjoyed about the community of writers in the 17th century called ‘Roaring Boys’.

There are definite links between the worlds of players and Dr Forman. Both lived and worked south of the Thames, where they were safe from much of interference from the City of London. Not only that, but Forman had many theatrical people in his casebooks, from actors, managers and even the woman who (some, like Rowe) propose to be Shakespeare’s dark lady.

What the book succeeds in doing, is paint a picture of the world and something of the character of Forman himself.

Simon Forman is not portrayed simply as a cynical hack but an optimistic man with a fierce desire for knowledge. He fought for knowledge his whole life, being constantly turned away from it by life. Everything he learns, he does it by determined effort. That a lot of his knowledge seems silly to us now, lessons of astrology and humoral theory, is irrelevant, in an age where Queen Elizabeth would consult Dr Dee, he mastered what there was to know. Not only that, the extensive use of documenting, the many casebooks and the written additions he made in the books he read, means that he at least tried to systematise his knowledge and rely on what worked for him. We can pick out the funny cures but a lot of what he proscribed was common sense or at the very least not harmful in itself.

Despite all this, Forman is not an angel. He is vain (as someone who wrote so much about himself has to be), he was fond of showing off, he could treat his closest relationships with an unusual coldness and he slept around.. a lot. The codeword he used for this was ‘halek’. There is a lot of haleking going on in this book, even after he was married. In some ways, he reminds me of Samuel Pepys who came about fifty years after. Both men had a drive to know, both had full social lives, both had irresponsible (and sometimes just cruel) sexual lives and both recorded themselves voraciously. Forman wrote that a man was beyond old age when he hit his 50s, with such a short lifespan, a lust for life seems a noble thing.

Although the book was concise, well written and full of interesting detail, there was a feeling that in relying on the diaries so much, it becomes a little monotonous. Even diaries by the best diarists are a bit of a slog as reading a life in that form feels like one thing after another, I’d have liked a little more shaping in the telling.

All that aside, this was a fantastic book and made a perfect ending (for now) in my lethargic meander into the life of Simon Forman. All there needs now is a mini-series and a self-help book and I think Forman has all his media bases covered. I recommend anyone to find out a little bit more about this fascinating individual in whatever way they can.

Email ThisBlogThis!Share to TwitterShare to FacebookShare to Pinterest
Labels: Reviews, Something Else, Thoughts, Trips