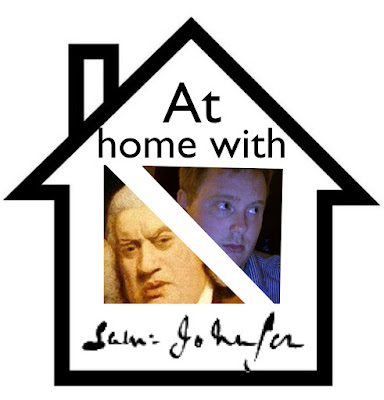 Again the Dr Johnson Reading Circle gathered to discuss a section of Boswell’s ‘Life of Johnson’ but this time there was tension in the air. Could we discuss a different section of the same book for the third time? Could we really unpack what it was we had read?
The section we looked at were the years of 1773-76 and, because they were years where Boswell and Johnson had an unusual amount of contact, they were unusually dense with small details if not any big ‘plot points’ in terms of Johnson’s life.

This is deep in the book and full of the book's meat and drink, evenings where Johnson meets up with various conversational foes and engages in verbal combat. As Johnson himself said, he liked to ‘dogmatise and be contradicted’. These sections discuss nationhood, the role of the aristocracy, poetry and poetic forgeries, the role of women, how to write in the voice of little fish and possible uses of dried orange peel.
One of the things that reading so much Johnson (or purported Johnson) is that it’s harder to have an idealised view of him anymore. It struck many that as modern as Johnson can be in some things, he still manages to be a figure marked and distanced by his time.
Johnson’s view on adultery, that a man may be sort-of excused but an adulterous woman is a whore ‘and that’s that’. His insistence that sub-ordination, the strengthening and proliferation of an unfair class system was vital to the stability of a country, and his singularly unromantic expressions about marriage (even amid his own sentimental mourning of Tetty) all caused discomfort in the group.

Most dividing in the room were his opinions about an unchecked democracy - he felt that landed men should only have the vote as their landowning gave them a stake in the country whereas a full franchise would open the gates to crowd-pleasing buffoons and orators. In a world of Foreign Minister BoJo and President Trump, there was an uncomfortable sting in Johnson’s conclusions.
Johnson’s less admirable side also jumped out when he would shut discussions down that were going down avenues he wouldn’t pursue. These avenues were frequently of a religious or morbid nature and it’s reflective of his soft underbelly how much pain certain topics could cause him.
On the positive side, we still had Johnson the steady moralist, the champion of education, clear-headed exposer of Ossian forgeries and, (one of my favourites) Johnson the joker. The man with the ‘laugh like a rhinoceros,’ whose infectious chuckles could cause others to laugh, even when they didn’t get the joke. We also had cheeky Johnson, who wouldn’t say why he collected orange peels and narrated for an imaginary biography how it would remain a central mystery in his life. Apologetic Johnson, who frequently was called forth to resurrect the dignity of Goldsmith; and sympathetic Johnson, who rushed back to the Thrales when their eldest son died, only to be told his comfort wasn’t needed.


Rather then running out of things to say, we could have spoken for a number of more hours.

Next week I am off to Venice, where I shall take a volume of Casanova's memoirs and plan to soak in the atmosphere.