Fanny Hill: Memoirs of a Woman of Pleasure - John Cleland

Fanny Hill is a pornographic novel that was banned for years and can now be bought in a mass produced paperback under a classical imprint. 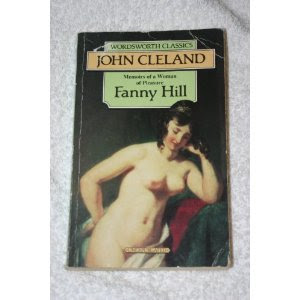 I had this edition

What is it that has made this book stand the test of time, overcome its unruly provenance and gain a certain amount of respectability? Is it the plot, the writing, the characterisation or some other quality that has managed this feat? 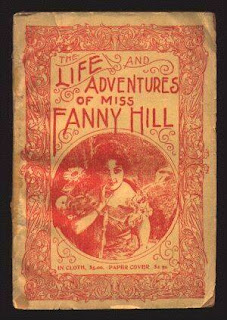 But this is my favourite cover
Starting with the plot, it is in some ways a pretty typical picaresque novel. A young woman from a poor social background has to make her own way in life and finds herself experiencing both high-life and low-life as she does so. Fanny Hill’s adventures start when her parents die and she travels to London to become a maid. Instead of becoming a maid she is lured into a life of prostitution with the aid of Mother Brown and the seductive Phoebe. She is destined to have her virginity sold to an ugly man but he is impotent and storms out in a rage. Fanny then sneaks out with the beautiful and kind Charles. 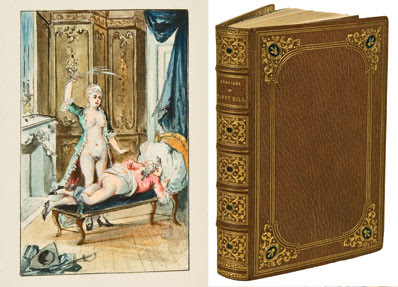 Some are quite posh
Charles takes her virginity and the two become lovers. However, his father is jealous of Charles’ relationship with a rich aunt and abducts him onto a ship. When Fanny goes to confront him, worse news still, Charles’ father is the disgusting man from before. Fanny is alone and owing rent. Luckily her landlady sets her up with a smart but cold man who needs a mistress. However, Fanny sees the man with her maid and so decides to get her own back with his (extraordinarily endowed) servant Will. He catches her and she is in the streets again.

... I think it’s fair to say the plot is not the reason it has survived. Fanny’s world is one with only limited consequence and we were under no fear that she and Charles would not get together, that the event happened so suddenly and by chance does not help matters. These are all real Fanny Hill engravings
Maybe it is the characterisation then and the way the characterisation can discuss matters of importance. With Fanny being a female protagonist and the issue of female sexuality being front and centre, it is tempting to read Fanny Hill from a feminist perspective and to interpret Fanny as a powerful, confident woman using her sexuality to overcome the weakness of men and secure herself a fortune; or as a tale of masculine dominance forcing Fanny into her life of prostitution but I think that both would be wrong. 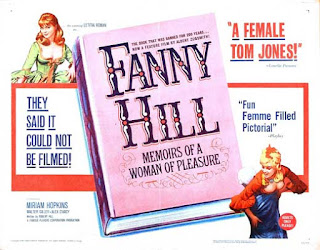 This film came out in 1964
Fanny is just too stupid to be interpreted as a strong, independent woman like Moll Flanders or Roxanna. There is almost no point in the story where Fanny makes a decision about her life or even seems to understand what is going on particularly. Neither does she seem like a victim as she passively, but contentedly succumbs to whatever experience is in front of her. The closest parallel to Fanny Hill I can think of is that of Forrest Gump. She is too thick to be anything other than a pretty and obliging doormat. 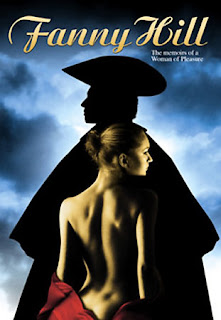 Most of the prostitutes in the books are similarly bland, a few are lascivious. Charles is a wet blanket and his dad a cartoon ogre. Poor Will is defined only by his large penis. Mother Brown is no more than a money obsessed business woman, but Fanny’s second madam, Mrs Cole is quite interesting. She defends her brothel as no more than enjoyment and is proud that her girls are kept safe and clean. The most interesting character is Mr H, the surly man who keeps Fanny as a mistress. He is intelligent but can’t share that with Fanny, all he can share with her is his body and it frustrates him. I found him interesting because his is a character you see in lots of old men and their trophy wives, but his was not a character that was explored. 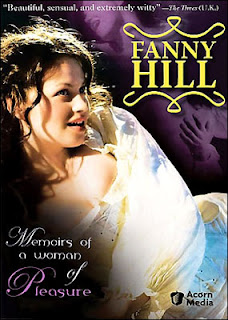 And this one in 2007, which I reviewed on youtube.
So, neither character nor plot make it worth lasting, how about writing. Here I can give good news because this book has some of the most enjoyably over the top descriptions of sex and body parts as I have ever read. What is interesting is that all the best descriptions are of cocks, especially big ones, which would suggest to me that male wonder about penis size has not changed much in the intervening time - but enough about that - It’s time for the top 5 descriptions of penises in ‘Memoirs of a Woman of Pleasure’.
Furious battering ram.
Red headed champion.
The dearest morsel of the Earth.
Staff of love.
A splitter indeed.
So with that cleared up, I think it is clear that this is a book worth surviving. Even if it is just because it made me smile.