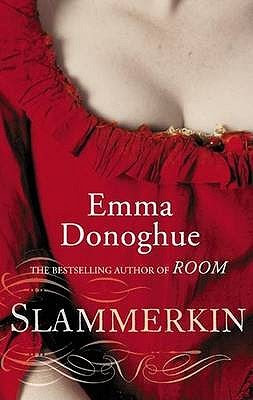 Slammerkin is a novel published in 2000 by Emma Donoghue, who has since found fame for writing Room. Unlike last week’s Golden Hill, the novel is not written in a (supposedly) eighteenth century style. When I bought the book, I thought it would be the story of Mrs Slammerkin from The Beggar’s Opera, but it turned out to be inspired by various fragments of eighteenth century court cases

In many ways it follows the traditional eighteenth-century prostitute narrative, a young, innocent maid is seduced and finds herself on the streets of London, where she has to sell he body to survive. This tends to continue until the poor woman is hanged, dies of disease or (if it’s a happy story) marries into wealth and happiness.

What is strange about this book, is that instead of being born in the country and running away to London, Mary Saunders is born in London and finds herself in the country.  She loses her maidenhead for a ribbon, she then lives the life of a slammerkin, or trull with new-found friend, Doll Higgins. When Doll dies and Mary finds herself at the attentions of a knife-happy pimp, so she runs to the countryside to her mother’s childhood home of Monmouth.

Mary is dismayed by Monmouth; it’s smallness, its drabness and the excess of crows (the original title was ‘A Complaint of Crows’ – a more accurate title, Mary complains a lot). There, she enters service with her mother’s old friend, struggling with the constraints of a maidservant’s life but enjoying the warmth and safety of a family.

Here in the book, the point-of-view shatters somewhat. Where we have been following Mary and her alone; we now spend a little time in the heads of the whole household; Mr and Mrs Jones, Mrs Ash the nanny, apprentice Daffy and black maid-of-all work Abi. I won’t reveal the ending, but Mary’s old ways, spurred by her longing for applause and finery, cannot be held down and they erupt.

This is very much a book of two parts, it would seem the first 152 pages are little more than backstory, with the real story is the one that takes place in Monmouth. Looking at her website, it seems that the editor at Virago insisted on ‘lots more London’, so it would seem to be their fault that the novel feels a little… wonky somehow.

Not that the London stuff is bad, it’s well researched and properly evokes the world of the bunters - the streetwalkers, those with less stake in society’s respectable life then even the moderately high-class Fanny Hill. The world is sweaty and clammy and horrid (the world ‘greasy’ is used countless times). Doll Higgin is an enjoyable, if unoriginal ‘whore’ character and Mary Saunders’ rapidly hardening worldview is well portrayed. However, the London scenes were pretty generic with a number of nudge-nudge wink-wink references to Scratching Fanny, the Cock Lane Ghost and a cameo from Samuel Johnson and Boswell.

However, it’s the Monmouth stuff that is the real meat of the story – from the suggestions of the website, it would seem that this was the novel originally. The relationship between Mary and Mrs Jones is very well done. Mrs Jones is the loving, kind mother that Mary longed for but also a representative of the narrow, blinkered world of the Welsh Marches. There’s a genuinely layered relationship between them; a lonely woman and her surrogate daughter who is also her social inferior. The household also includes Abi, a Barbadian former-slave, who is officially no longer a slave but can’t convince the Jones family to actually pay her. At the end of the novel, she is stranded in London, having run away and looking forward to her new life, hopefully her life will pan out better then Mary Saunders.

Ultimately, I enjoyed Slammerkin, I felt that I would probably have enjoyed A Complaint of Crows more, before publisher intervention unbalanced the book and changed it from the slightly dour tone of the original title to the ‘ho-ho-ho’ of Slammerkin. I’m all for an underworldly, rambunctious take on the eighteenth-century (I’ve written my own) but there is also a need for the gritty, the greasy and the dour - and Emma Donoghue should have been allowed to do just that.