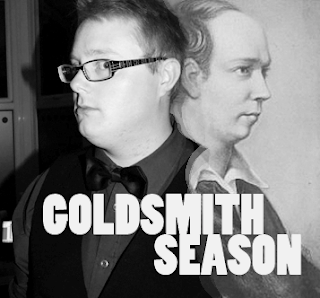 The heat was scorching and the wine moved into the reading room - it was script time at Dr Johnson’s Reading Circle. Our last script had been ‘School for Scandal’, which had to be finished in the pizza place between bites, so we got immediately underway to finish the play in the allotted time. The clock was ticking.

The original plan had been to cut parts of the script but the play turned out to be so tightly written that the only thing that could be removed without changing the plot was a short song. However, this tightness also meant that we could clip along at a decent pace, would that be enough?

Last time, we had been cast against type, this time the actors were typecast. Mr Hardcastle and Sir Charles Marlow were played by a number of statesmanlike performers, a proper actor took the lead, Kate and Constance ran rings around the men and I got to play a red-faced oik. It was a part I found myself more suited to as glasses of red wine slipped down.

Goldsmith wrote ‘She Stoops to Conquer’ as a laughing comedy, hoping to throw off the shackles of the polite, sentimental comedy that had been ruling the stage. I think he succeeded. There were chuckles throughout, but the first big laughs happened in the scene where Mr Hardcastle attempted to train his rural servants in their proper duties. The lines are quick and funny, a trait exacerbated by the fact that the servants hadn’t been cast and people jumped in with their best yokel voices.

The play starts at pace and accelerates throughout. The actors, fresh to the text, sight reading for their lives managed to prance along, even with their tongues loosened by wine. As the characters talked at cross purposes, and lines piled on lines even eyeballs sweated at the effort.

The plot is a classic (i.e largely plagiarised) tale of deception and confusion. Two young men, Marlow and Hastings, travel to the countryside so that Hastings can spirit away his beloved Constance and so Marlow can woo Kate, a task he does not relish in the least. Marlow has a problem, he is free to play and joke with women of a class beneath him but becomes acutely self-conscious when talking to a woman of his own class. This leads to an extremely funny scene where stammers and burbles out turgid nothings to Kate as she teases him by constantly pulling him back into the conversation.

The two men arrive at the stolid Mr Hardcastle’s house on the misapprehension that it’s an inn. They proceed to treat the old man terribly, throwing their weight around and muttering about the old boor of an ‘innkeeper’ who insists on following them around telling them dull stories about the Duke of Marlborough. This mistake also means that Marlow mistakes Kate (who is wearing a different dress from before) as a barmaid and manages a far freer conversation. The task remains for Kate to encourage Marlow to be free with her real self, for Hastings to steal away with Constance (and her jewels) and for no-one to get punched in the process.

Goldsmith toiled on the play in a rural retreat in Islington, remarking on what a serious expression he had wandering the fields and coming up with jokes. While many of the jokes landed, of particular note is Mr Hardcastle’s view on politics, which is just as true today as then;
“There was a time, indeed, I fretted myself about the mistakes of government, like other people; but finding myself every day grow more angry, and the government growing no better, I left it to mend itself.”

According to his sister, part of the plot was inspired by an incident in the young Goldsmith’s life. As a schoolboy he had obtained a guinea and determined to make the most of it, he’d gone into town and asked for ‘the best house’. Either through confusion or waggery, he’d been pointed to a well-to-do family rather than an inn and had proceeded to treat them with the same insolence portrayed in the play. He only found out the next morning when he asked to pay his bill. Like many stories about Goldsmith, it’s a good-un but can’t be completely relied on.

Goldsmith can be relied on for a good tale though and we were joyfully carried along by the play.
Some of the members had studied the ‘She Stoops to Conquer’ in school and were apprehensive about it, remembering tedious hours raking the text for jokes. However, with friendly company and a game cast, the jokes kept popping up and we got to the end thoroughly satisfied, we even finished on time.

So the year ended pleasantly with a lot of laughs. Our theatrical endeavours continue in August with a trip to Stratford Upon Avon and the regular session begin again in October to talk about Henry Fielding’s ‘Joseph Andrews’. Everyone is welcome.

Email ThisBlogThis!Share to TwitterShare to FacebookShare to Pinterest
Labels: At Home With Samuel Johnson, Goldsmith Season, Reviews, Something Silly, Thoughts