Review: ‘An Enquiry Into the Present State of Polite Learning in Europe’ by Oliver Goldsmith 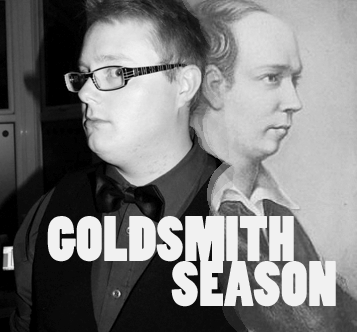 ‘An Enquiry Into the Present State of Polite Learning in Europe’ was Oliver Goldsmith’s first large original work. He’d been serialising Voltaire and writing a few bits and pieces for magazines whilst trying to establish a medical practice (which failed) and working as a teaching assistant (he hated it).

The book came out to a couple of snide reviews and very little public response. He would later claim that audiences actively made an effort not to know when he had something out. Even today, modern Goldsmith writers tend not to focus on this work and even flag-wavers for him like Robert Hopkins (who wrote a book about his secret genius) don’t have much to say about it. Not the most enticing of books then.

First off, I must say that I didn’t find it as dull as the title makes it sound. The first line kicks off with something true and fun;
“It has been so long the practice of representing literature as declining, that every renewal of this complaint now come with diminished influence.”

Isn’t that just the truth? I see the democratisation on the internet as pretty analogue to the explosion of print culture in the early-mid eighteenth century. For the first time, many who wouldn’t have had the opportunity to write can make themselves heard, with much of it being absolute rubbish, some of it being absolute gold and the old guard distressed about all of it. Goldsmith is a little disingenuous here though, as he represents himself as that old guard even though he is nothing of the sort.

He goes on to say that while he agrees that there is a lot of bad writing around, invective and diatribe are not going to help as much as reasoned and decent analysis. Again, he’s not being completely honest, this is very much invective and diatribe cunningly(ish) described as analysis. So much emphasis has been put on Goldsmith’s easy readability that I think readers have often missed the little shards of irony that he imbeds in most of his work, including this one.

His ‘analysis’ is that great literature starts at a general stage by people he calls ‘poets’. These people are original thinkers, they obtain their ideas from nature, from the observation of people and the world and they put them down in ways that feel natural to them.

The next stage features people he calls ‘philosophers’, they systematise the works of poets, develop nascent ideas, expand, expound and generally focus the work of the people before them.

The third stage is that of the ‘critics’. They take the work of poets and philosophers, split them up, grind them down and turn them into arbitrary rules. An age of critics is one of decline.

He sees the late scholastic period as one of critics, as the bright poets and philosophers of the classical era are chopped up and systematised. He feels that true literature is led by feeling and observation of the real world and that all the rules imposed by critics diluted the original vision. Genius must be allowed to break rules and follow its own inclination.

It’s not that there aren’t geniuses in these declining ages but that their genius is pushed into stale tracks. Ways to spot an age of decline included lengthening books (“Were angels to write books, they would not write folios"), and the evil tripartite of dictionaries, commentaries and compilations. He didn’t yet know Samuel Johnson (who had finished his dictionary four years before) nor did he then know he would spend most of his career writing compilations.

Following his ‘analysis’, he then goes on to cursorily summarise the learning in various European countries, which I will summarise even more cursorily.

Italy: Not good, and Dante is overrated.
Germany: Keen, but into the wrong stuff. “If criticism could have improved a people, the Germans would have been the most polite nation alive.”
Holland: Copies everyone else.
Spain: Useless.
Sweden: Nothing good yet but maybe soon.
Denmark: One man does all the good work there.
France: Doing well. The French are too arrogant to care too deeply about criticism. They treat writers well, neither starving them or overfeeding them and making them fat and useless. They write wittily with a lot of style but most that only pretties up ugly thinking - he compares it to make-up on a corpse.
The United Kingdom: At the moment, it could go either way. They starve writers when they are unknown but fatten them up to much once they find success. Besides, what writers really need to work best is praise and attention and they (or more particularly, Goldsmith) is not getting enough of that at the moment.

Critics, that sign of the armageddon, are breeding in the United Kingdom, they’ve already killed comedy, declaring comic subjects as ‘low’ and so not worthy of attention. Goldsmith argues that comedy and humour are all about the low, as the chief cause of laughter is recognising where someone is beneath us. That is not to say we should punch down, laughing at something that could happen to anybody is not funny, but seeing how a person lowers themselves through ridiculous behaviour is. His peculiar example is that a man with no nose is not funny (as we could all lose a nose) but a man with no nose who buys an elaborate snuff-box is (as why would a man with no nose want a snuff-box?). Interestingly, this passionate fondness for laughing comedy would last right through his career.

Finally, Goldsmith’s thoughts on theatre - it’d be fine if it wasn’t for actors, audiences and theatres. (To be fair, there was a tradition of reading plays for pleasure that doesn’t really exist anymore).

This isn’t a work of in-depth analysis, though it does have some killer lines and spark some interesting ideas. His view of the purpose of writing, ‘to be either amusing or useful’ is very close to Johnson’s, ‘to enable readers better to enjoy life or better to endure it.” There’s another sentence which caught my eye and I will use for a future ‘Under the Glass’.

Finally, there is one of the best advice I can think of for writers, “Let us, instead of writing finely, try to write naturally.”