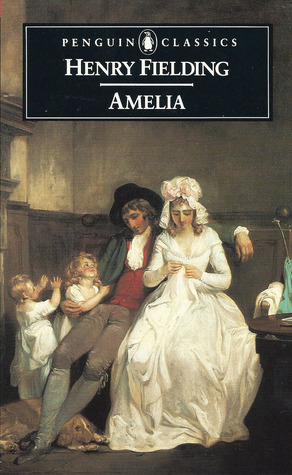 ‘Amelia’ was a book written by Henry Fielding only two years after the publication of ‘Tom Jones’ but it’s so very different in tone and purpose that it could seem to be from a different author. The book started a paper war which included people like Christopher Smart, Tobias Smollett and John Hill. It’s also a novel which hasn’t had the life of fame of Fielding’s other books. I was a little nervous of this novel, hearing of its grim and dour tone. I also had experience with this book, having tried it twice and not managed to get past the second book (of twelve).

Where the main takeaway from this book tends to be the dramatic shift in tone so shortly after ‘Tom Jones’, what is most interesting are the many experiments that Fielding tries in the novel, the first of which was the reason I had so much difficulty reading the book on my first two attempts. Despite the title, the first book doesn’t feature Amelia at all but introduces us to William Booth, his incarceration in Newgate and his meeting with Miss Matthews, a former lover. The second and third books consist of Booth telling the story of how he met and married Amelia and the people who helped and hindered them on the way.

The fact is, that these three books consist of one-hundred-and-fifty pages of almost constant telling. Lacking the comic subject matter, the telling is fairly average eighteenth-century storytelling and rather lacklustre compared to the joy that is ‘Tom Jones’. However, in the next few books, we meet the characters we had been told about in Booth’s story and they are not exactly as described. Booth described Amelia as full of emotion but with an inner strength whereas, when she comes ‘on stage’ is a fluttering, flustered and emotional mess; Booth’s best friend is rather more creepy and uncertain than he first appears, and Dr Harrison, the noble advisor, is rather pricklier and more censorious then pictured. Those first pages were not just simple telling but a very interesting form of showing, the reader is being shown how Booth’s ability to read the characters around him is deeply flawed.

From then on, the reader spends the rest of the book in the knowledge that nobody is quite what they seem. We were aware that the book had ideas in this direction from the beginning, as Booth is let into Newgate, the characters inside were equally duplicitous but now we are on the alert for such behaviour outside Newgate as well. Those early chapters in Newgate were really well written as well, the short pen-sketches of the inmates have a vivacity that points to Dickens, it’s such a pity Fielding doesn’t get his Dickens pen out for any of the main characters.

…And that’s the key flaw of the book. Fielding is a comic writer to his very marrow but his worldview has changed so much, and the intention for the novel is so different that he can’t play to his strengths. There is the usual intrusive narrator but it doesn’t intrude enough, and those intrusions don’t have any of the playfulness, bombast or sly wit that they do in Fielding’s other works. An intrusive narrator without those things serves more as a hinderance to the book and serve to drag it down.

The book works better when it is dealing in facades and masks. Fielding is very good at showing a character who seems to have the best intentions but then showing the little slips that reveal something more. Miss Matthews, at the beginning is clearly not following Booth’s story the way he intends it to be heard, Sir James (Booth’s ‘great’ friend) lets slip moments of his selfishness and lasciviousness, the kindly landlady, Mrs Ellinson acts suspiciously erratically - and the reader is trained to watch out for these slips of masks.

What doesn’t work as well are the characters who are supposed to be sincere. Aside from the fact that almost no-one in this world is, the people who are, are mostly uninteresting. Amelia was based on Fielding’s wife Charlotte, just as Sophia in Tom Jones was but Sophia was opinionated and took action whereas Amelia is a sappy, dull swoon machine. Booth is a little more interesting, and I could imagine Tom Jones growing up to be him but like Tom, he’s so very stupid and fails to spot the most obvious traps which makes him hard to root for also.

There are some good little moments; the writer in the sponging house who is lazy because he sometimes only writes for five hours a day (and is also near illiterate), the very surprising praise for dancing masters who teach people who not to make their limbs a burden and Mrs Ellinson’s comment that “I would rather leave out the first two syllables of ‘gentleman’ than the last”. I was amused that Raneleigh was a terrible place of debauch but Vauxhall was almost heaven on Earth - because Fielding was friends with Vauxhall’s owner. I also enjoyed the overtly comic wrap-up informing us what happened to everyone, even if it didn’t fit the overall tone of the book.

In trying to branch out into a serious tale of social issues (and almost universal depravity), Fielding made a bold experiment which didn’t quite come off. Had he lived, this book may be seen as an important transitioning work to a darker, deeper set of novels which made the genre a more complex and flexible form. As he wrote relatively little and died shortly after, this novel only shows a great writer not quite hitting his mark.