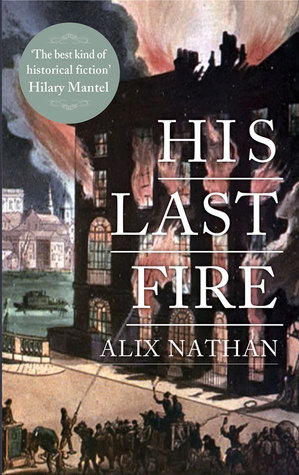 I often read the book reviews on The Guardian website because they aren’t hidden behind a pay wall. On the same day they had a very intriguing novel set in The Panacean Society in Bedford (review coming soon) and a novel called ‘The Warlow Experiment’. This second book seemed very interesting because it was essentially about an experiment on an ornamental hermit. The review also said the novel was a little flabby and the story was told better as a short story in ‘His Last Fire’ - so I got that instead.

All of the stories are set at the end of the eighteenth and beginning of the nineteenth centuries. They mostly revolve around the ideas swirling in this age of revolution, whether they be scientific, political or sociological. It’s a patchwork quilt of unrest. Pretty much every character has a copy of ‘The Rights of Man’ nestled in a coat pocket or tucked on a bookshelf. The themes of liberty against order are prominent in many of the stories, whether its children torn from parents after rioting, plotting to kill the king, or accidentally crippling a man in a riot.

I do have some trouble with short stories, I find they end just when I am getting into them and I found that the case in this collection. Many of the stories and many of the paragraphs begin with the pronouns ‘he’ and ‘she’, it can be up to a page in a five page story till the reader discovers who this ‘he’ or ‘she’ is. By the time the story had introduced who the story was about, I found it was almost time to read the next one.

One of the reason for this plethora of pronouns is the fondness for reoccurring characters. I think the idea is that there’s a little delay in introducing the character so that I, as a reader, feel a little jolt of pleasure when someone from a previous story is revealed to be the protagonist of this one. The trouble is, the book is so coy about introducing its characters, that remembering who’s who takes a fair bit of work.

One of the stories that runs through the collection is the tragedy of Ellen and her son John. Following repercussions after the Gordon Riots, Ellen dresses as a tinker to escape the authorities. Her husband also runs and their son John is left behind. There’s a story where the aged ‘tinker’ Ellen is taken in and cared for by Nancy (who appears or is mentioned in other stories). There’s another story where John takes part in the Spithead Mutiny and later goes in search of the woman he loves who he narrowly misses. Mother, son, lover and all sorts of other characters keep missing each other. We get a picture of a world in mess and disorder with no happy endings for certain.

Nancy also appears in a story about Hadfield, who once tried to assassinate George III at a theatre and was deemed lunatic and sent to Bedlam. In this story, he feigns madness after his plot fails due to some badly cast bullets. His comrades in arms also have stories about them. We also meet Hadfield in another story about a man being sent to a lunatic asylum (in which Hadfield is an inmate). The man is an eccentric peer with a mania for collecting who we were introduced to in a story where he falls in love with two Lapp women he brought back as ‘souvenirs’ from a tour of Lapland. His experience in the lunatic asylum sends him into full madness.

The interweaving of the stories is both interesting and exhausting, there is simply not enough room to assimilate all the people and plots. I’m not surprised that two of Alix Nathan’s full novels are expansions of characters from this collection, there are hints at a whole career in this book which would be exhilarating if any of it had room to breathe.

The two stories that inspired ‘The Warlow Experiment’ were probably my favourite. I could relax because they didn’t link in to any of the other stories and I found the subject fascinating. A man called Powyss creates an experiment which reminded me a little of Thomas Day’s attempt to create a perfect wife. This experiment is to isolate a man called Warlow in a suite of rooms under his house and to study human resilience. Warlow is a volunteer and his family are paid well for his participation and there are some really interesting questions raised about how much he can be said to volunteer given the poverty that forces him to accept.

What I found most interesting is that Warlow was essentially an un-ornamental hermit. He has to stay for the standard seven years, can’t cut his hair or nails, is given food and books and left alone. Though literate, he’s not literate enough to understand the books he has been left and essentially is trapped in a windowless room with nothing but his own memories of sun and soil. It’s chilling and well explored.

The title story was probably my least favourite. A man with a love of fire makes a living by torching rich houses, stealing what he can and then rescuing the inhabitants for possible reward. This is a really interesting set-up. He then falls in love with a maid and, when he goes to rescue her, she realises that he started the fire. Telling her that no-one will believe her and that she’ll be out on her own, he blackmails her into marrying him. He justifies it to himself that her marrying him will save him from his arsonist ways - we never learn what happens next.

All in all, this is a very interesting collection and Alix Nathan is an author I will seek out again, if just to see what she can do with the room to develop all the intriguing ideas and characters that feel so rushed and garbled as they are presented here.