Review: The Foundling by Stacey Halls 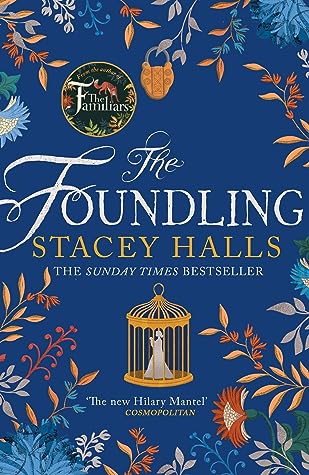 The Foundling by Stacey Halls presents itself as a historical novel founded (ahem) on a mystery. Bess Bright has left her newborn baby girl at the Foundling Hospital in London and returns six years later with, she hopes, enough money to pay a restoration fee and take the baby home. She’s shocked to find the baby was collected the day after she delivered it and the records say it was she who collected her. Actually, the mystery is solved very quickly and the book focuses most of its time on character drama and the central question, what does a child need from their mother?

It was very refreshing to see that Bess was not another prostitute and this was not going to be another Fanny Hill or Beggar’s Opera inspired look at criminal London. Bess is a shrimpseller, her father works in Billingsgate and she takes the cooked shrimp around on her hat, selling them as a warm snack for other workers. Other than Leon Garfield (whose books look at coachman, actors, pleasure garden owners, apprentices) most books set in eighteenth century London either tackle lords or courtesans, so I really enjoyed a peek at the run-down but law-abiding lives of these working people. I particularly liked her friendship with a black family who run a second-hand clothes stall in rag-fair, which presented a side of the city not often enough noted, the lives of people just getting on with things. I loved the little details, such as the one that said it was possible to get a free visit to the Tower of London’s lions by bringing a dead dog for them to eat.

As Bess quickly locates the whereabouts of her missing daughter, she poses as a nursemaid in that household. The child is now called Charlotte (instead of Clara) and believes she is the daughter of Alexandra Callard, the wife of Daniel, the man who had her with Bess.

Alexandra and Bess share narrating duties and while Bess is straightforward and likeable, it is Alexandra who is the stand-out character. She is a widow who only ever leaves the house to go to church, and then only recently because she realised her daughter needed some exposure to the outside world. It becomes clear that her agoraphobic tendencies (and her intense dislike of any physical contact) existed while she was still married and she knew Daniel went with other women. When her sister travels up north she demands to know the route so she can track it on a map, she obsessively reads papers, locks doors and every day has tea and converses with the pictures of her dead parents. There is a tragic back-story that explains her behaviour, which was well done but I would have preferred it if there hadn’t been and this was just the way she was.

Alexandra’s own insecurities mean that she keeps Charlotte in very close confinement but is unable to provide the warm, physical love a child needs. She clearly cares and loves for ‘her’ daughter but can’t show it and when Bess comes in as nursemaid, she provides the warmth and expressive love the girl needs. However, were she to take Charlotte away, not only would they have to hide from any agents coming to get her back, but Bess simply cannot provide the safety and financial security Alexandra can. This is the real heart of the book; which is best for the child, safety and decent prospects in a cold, unemotional environment, or warm, expressive love without any of that safety?

I couldn’t think of a decent solution to the problem and for any happy ending, the characters would have to bend significantly.. I don’t wish to reveal how it ends, the paperback only came out last year.

While there’s a lot to recommend this book, it’s an interesting premise, a sharp dilemma and some pretty decent character writing, it’s a surprisingly straightforward one. The central mystery is solved by chance and within a few chapters, the subsequent details are also fairly straightforward and rely a little too much on chance. Like my disappointment with Alexandra’s backstory, everything in this book is a little too neat and tidy, the characters fit in their roles a little too well and the plot moves a little too smoothly. However, like that backstory, it is well done, the book is definitely a page-turner and things fall into place when they should.

Right near the end a new character called Lyle is introduced. His a Slavic immigrant who acts more cockney than cockney and has a slight case of the Dick Van Dyke’s about him. While engaging, he’s much broader than the other people in the book and comes into the story too late to properly bed in, as such he seems a little extraneous. It almost feels a redraft would seed him earlier into the work or remove him completely and that’s where I find myself with this book, that it’s perfectly decent but for it to be remarkable it could have taken a few more drafts.