On Saturday and Sunday I became gripped with an insatiable urge to clean everything. Each book was taken off the shelf and individually dusted, each bookcase washed down, all my trinkets and knick-knacks polished. I even pulled my bed out to the other side of the room to tackle the dust down there. This urge was abetted by my landlord’s installation of a washing machine in the unrented flat next door to use as a laundry room during this whole corona period. All day and deep into the night I was washing and drying all the various sheets and bits and bobs I’ve had laying around.

For a break, I took my clothe’s horse down to the front of the house along with a chair and a book. There I sat, slightly jutting out on the path, enjoying some of the first good sun this year, a year mostly defined by rain and storm. Normally I wouldn’t consider sitting out on the street like that but all normality be hanged.

Politically, this was the week that the Queen gave a very measured speech and PM Boris Johnson was moved into intensive care but whereas I had found myself raking through twitter and reading all the news possible, I began to feel that a cursory glance is enough. Certainly, headlines about mass graves do not foster an attitude of ‘resilient good humour’.

On Thursday I took my official government mandated walk™ through Gladstone Park. The sun was shining and the sky was blue, everything was glorious and wonderful. I was naughty, sat on the grass a long way away from anyone else and just sat. After a while sitting became laying and after a while laying became snoozing. Suddenly, this almighty roar woke me and I sat straight up. What was that terrible racket? It was a plane. I grew up next to Gatwick Airport, I should not be surprised by a plane but there was something so violent about the noise, so strange seeing it lumber through the sky after only a few weeks not seeing one.

My nap interrupted, I started walking back home, half skipping through the grass, picking up white dandelions to blow on and let fly. As I was gambolling around, I felt a deep and wonderful peace with the world, then I slipped on a dogshit and fell over. Luckily I didn’t fall into it and I only had one shoe to clean but it ended my reverie for the moment. I plodded home, trying to scrape my shoes and watched a jogger run past me in a rainbow unicorn onesie and snowboots.

On Thursday night, I had something a little special planned. People at school were having a video formal dinner, the idea being to have something to dress up for and feel like there was something to look forward to. There was even a proper invite. 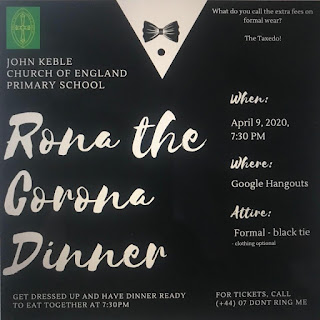 I tried to cook something sort of posh, more than my usual stews and curries. 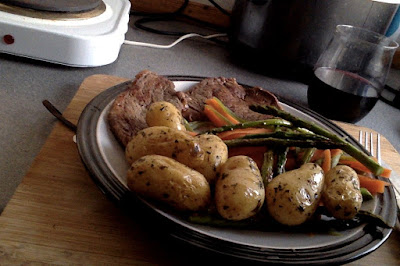 I also dressed in my velvet jacket and bow tie, even lit a candle. 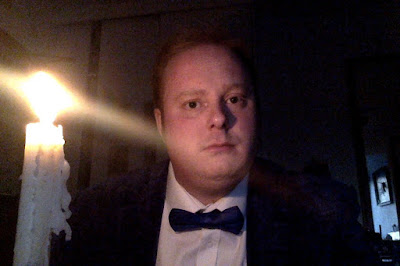 After that, I’m not totally sure. I managed to get home to my bed from my table but I’m not completely sure how.

We plan to do it again next week.

Email ThisBlogThis!Share to TwitterShare to FacebookShare to Pinterest
Labels: Journal of the Plague Year 2020, Something Else, Something Silly, Thoughts