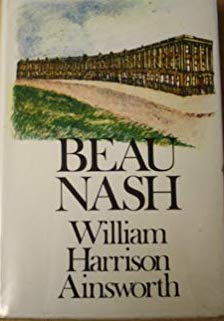 As soon as I decided to spend a few days in Bath, I knew which book I wanted to take with me. William Harrison Ainsworth has been a (frequently nutty) pleasure every other time I’ve spent time with him and to share eighteenth century Bath seemed a great idea. What craziness could he conjure up in those serpentine streets?

It turns out, not much. Ainsworth is not playing with his full deck of cards, where his great skill is delightfully improbable action and melodrama, here the melodrama is kept safe within the genre and the improbabilities are not greater than other novels. He’s being relatively subdued, a tale of adultery, duelling and young love.

We start of with a love triangle. Both Sir Thomas Carew and Reginald Grey fall immediately for the beautiful Mrs Mallet, who has traveled to Bath with her husband. Mr Mallet is a country beast, full of solid virtues and considers that his wife can never be won over by Grey’s sleek politeness of Carew’s glitz. He’s wrong and his wife runs off with Carew, regretting it instantly. A duel between Mallet and Carew ends in Mallet’s death, Mrs Mallet’s self-imposed exile into a sisterhood and Carew’s temporary banishment from Bath.

Later, Mr Mallet’s nephew, the inheritor of the estate, comes to Bath to settle an annuity on Mrs Mallet. While there, he falls in love with a woman that whose mother doesn’t trust him, and whom his own mother doesn’t trust. Also, Carew returns newly wealthy and plots to steal Mrs Mallet away. The young couple end up together and the penitent adulteress pines away in the approved manner.

There is no poisoned hair, underground weddings, random death-by-lightning, prison escapes, storms, severed heads or weird torture houses. It was a little flat.

Yet the book was enjoyable, and it showed up another aspect of William Harrison Ainsworth that draws me to him. He’s a goofball. While this comes across most when he’s being utterly mental, it comes across in a more subdued work, and comes across enchantingly. My Mum watches Neighbours, she started to watch it because the script was dumb and the acting laughably bad but she grew attached to it anyway - or even because of those qualities. That’s how I feel about Ainsworth.

The man couldn’t write natural dialogue even if he were living with people who spoke it his whole life. At one point a man tells his fiancée that he doesn’t love another woman because that other woman is too beautiful and clever and makes him feel threatened, that he chose his fiancée because she was neither too clever or beautiful. Her response to this sucker-punch of a compliment is to smile and declare that he flatters her too much. The characters are always given each other awkward, stiff complements, thanking each other for those compliments and flushing with pleasure at receiving them.

The prose is also stiff and awkward. Occasionally, Yoda takes charge and we get sentences like ‘remarkably well, he looked’. Frequently characters ejaculate rather than talk. There’s a part describing a garden where the text says;
“The head gardener, whose name appeared to be Markham”
How did the gardener appear to be someone called Markham? Was there a particular birthmarkham on his face? Did he have it written into his clothes?

Such silliness is sort of charming - and the man did his research - the Princess Amelia appears in this book as bolshy and bossy as she apparently was in real life. Fielding turns up ill for a cameo, Ralph Allen is the picture of kindness and practicality. I also appreciate this book for introducing me to Reverend Grace who is so very nice and peculiar that his book, ‘The Spiritual Quixote’ has been bumped up my reading list.

As for Beau Nash, he doesn’t appear in this work very often, he is mainly a messenger - even his role of advice-giver is taken by Grace and Allen. I expect that is how Nash would have appeared to a visitor, always smiling and welcoming, always going off to welcome someone else, like a bride at a wedding reception.

So, while this book is definitely not the one I would introduce to people if I wanted to share William Harrison Ainsworth, for someone who has a blind spot for him, it was a perfectly entertaining and pleasurable few hours.