Review: The Rapture by Claire McGlasson 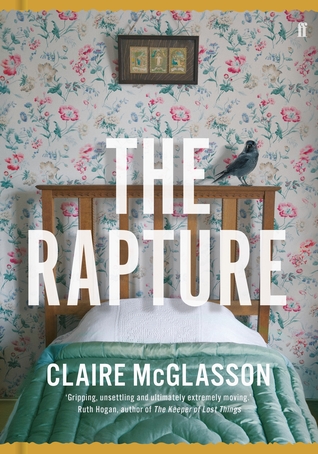 It’s not often I read a book the same century it was released, let alone a month later but ‘The Rapture’ by Claire McGlasson is about something that is rising up my list of interests, The Panacea Society. Starting with the peculiar ‘Satan’s Mistress’, then my visit to Bedford, then my reading of ‘Octavia: Daughter of God’, the Panaceans went from something on the fringes of my fascination to somewhere on the inside part of the edge (above Dr Forman but below William Harrison Ainsworth). It is also something I would have wanted to write a novel about some day.

I was a little wary with the book’s title. Not only did the Panaceans not believe in the concept of the Rapture, they believed in the opposite - they believed that their members would live forever and would be part of bringing Jesus down, rather than going up to meet him. (When members did start dying, they thought those members souls would go to Uranus, waiting to come down with the big J). But it became clear that ‘rapture’ did not mean the belief of being snatched away by God, but the emotion of it and its straddling between joy and insanity.

The story is about Dilys Barltrop, Octavia’s daughter who found herself surrounded and buried by her mother’s religious organisation. Like Octavia, Dilys was prone to melancholic episodes and was sent away from Bedford a number of times, once to a cousin’s house and once to the south of France. She returned and lived back in the society. When her mother died, it was Dilys who organised all of the estate, selling Octavia’s house to the society for a nominal sum and receiving an annuity with which she lived quietly in a society owned house a little away from The Campus. Her main pleasure was to go down to the River Ouse and have an ice cream.

The novel takes Dilys, her anxieties and the pressure cooker of living with, and being the daughter of, ‘The Daughter of God’ and dramatises it. While it uses many genuine Panacea members, makes extensive us of Panacea archives and includes a number of key moments of the society, it is definitely a work of fiction. The timeline of the society is moved around and squished up, the relationship between Octavia, Dilys and her brother Adrian is changed, there is a whole new character called Grace who is the plot’s catalyst…oh, and there’s an accusation of murder.

This meant that I read the whole book in two minds, one as a person interested in the society and the second as a reader of a novel. As a result, I both love this book and dislike it.

It’s clear that most readers are supposed to come to the novel first and then perhaps find out more about the society, to do it the other way round is a little disconcerting. There are a couple of blatant mistakes, Joanna Southcott is labelled the seventh prophet of ‘The Visitation’ and not the second. There is (what I feel) a negative slant on the notion of Overcoming. As I understood it, the process was more one of confession and self-accusation, whereas in the novel it becomes something of a mini police state. Nor does the book create the feeling of community and belonging that many of the members seemed to get from the society. Another big change is that the novel has scenes with Adrian trying to break into The Campus to visit Dilys when he actually visited with his children. Dilys’s fate at the end of the novel has her taken somewhere which is not the south of France.

And there’s Grace. A character invented for the book, she becomes the housemaid at Number 12, where Octavia and Dilys live. She and Dilys share their doubts, develop a friendship, a love and possibly a relationship, mostly through glances. Dilys herself narrates the novel (in the present tense) and is not the most reliable of narrators, being heavily weighed down and disturbed by her strange life. It may be that the relationship was consummated, it may be that it was consenting or not, the way the book is told leaves it uncertain. She exists in the book as a chance for grace, a chance for escape and a chance for love - as a novelistic conceit, she’s brilliant. Having a character break through Dilys’s shell, tease her out of herself, give her things to hope for and a secret to keep the book motoring along with great tension.

This is a really great novel.

When the novel and historical aspects lined up, I could enjoy it without reserve. The scenes where the members go down to London for the unveiling of Price’s Southcott Box is nail-biting; the bits where the members sneak around Bedford, burying linen squares of protection next to important buildings, are delightful and the dramatisation of Emily Godwin ‘casting out Controls’ by playacting fighting demons with a penknife are far more horrifying and shocking then they should be.

Even the parts that must be made up, like Dilys peeking through a keyhole to see her mother bare-chested, simulating breast-feeding with her closest followers, are deftly and engagingly written. The ending (spoiler) with Dilys going to an asylum, as her mother had been, but believing it was a ship to freedom with her brother, was harrowing and deeply moving - even if it has never happened. For those unencumbered by knowledge of the Panacea Society, this is a gripping and wonderful novel. For those with an interest in such things, it’s a gripping and wonderful novel with some massive liberties taken with the events.

Oh, and the accusation of murder? In the book, Dilys claimed that Emily Godwin poisoned Edgar Peissart, who had been kicked out for seducing a young man, in order to make her prophecy of his death come true. I very much doubt this happened but it did make for a great story, and that sums up this book well.