Daring to leave the cosy safety of Dr Johnson’s House, the Reading Circle traveled to Stratford-Upon-Avon to visit one of the oldest historic house museums of them all, Shakespeare’s Birthplace.

On the way, the group were given a Shakespeare related quiz, the results of which would be revealed at the end of the day and confirm that we were not exactly Shakespeare scholars.

The first stop on the tour was Shakespeare’s Birthplace, a site of tourism since the 18th century and an official museum since 1849, when the Shakespeare’s Birthplace Trust was set up to stop PT Barnum buying it and shipping it over to the US. Thousands of people have visited it over the years, with a tradition being to carve their names on the walls and windows. We caught the signatures of Henry Irving and Thomas Carlyle scratched amongst a nest of names but other celebrated vandals include Walter Scott and Charles Dickens.

For those less destructively minded there was a visitor book going back to when the building was an inn called the Swan and Maidenhead. Names in there include Thackeray, Byron and Tennyson but was opened up on the page signed by Keats, he’d listed his place of abode as ‘everywhere’, because he was a waggish dude and a mad lad. 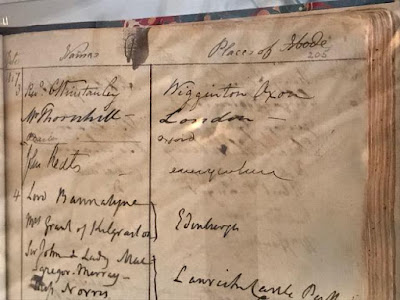 As an eighteenth century inclined group, one of the main interests in Stratford-Upon-Avon were the works and efforts that people like Johnson and Garrick put into establishing him as national icon. The visitor’s centre had a number of objects that related to this, including early souvenirs such as Shakespeare busts and snuffboxes and a collection of items related to Garrick’s Shakespeare Jubilee.

Held to celebrate the bicentenary of his birth (though five years late), this was a massive undertaking which swelled the town numbers and caused the creation of a temporary ballroom, racetrack and a huge pageant. Unfortunately the weather disagreed, the ballroom flooded, the pageant cancelled and hundreds of London’s bon ton were left wet, dirty and quite furious. The Birthplace contains a ticket (at a guinea), a souvenir medal and the Jubilee Cup, won by a horse called Whirligig.

Even the enthusiastic Boswell, who turned up to the event in Corsican national dress, felt a little washed out by the end, writing:
“After the joy of the Jubilee came the uneasy reflection that I was in a little village in wet weather and knew not how to get away.”

The house itself is a small, cramped affair with large painted leather covers to insulate the walls. There were the rooms in which John Shakespeare made gloves, a bedroom for girls and one for boys, and the master bedroom where Shakespeare was born. Costumed guides lingered in a number of key rooms, giving little talks and answering questions. There were great efforts to give an impression of how the house could have looked in Shakespeare’s day, with period furniture and reproductions, they even went to the trouble of hiding a walkie-talkie in a little leather bag. 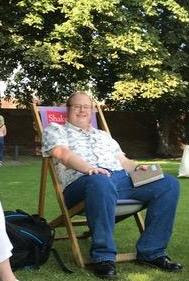 Outside, the sun was shining brightly and we wandered the garden before sitting down and listening to a little of Johnson’s introduction to his edition of Shakespeare’s plays. He hadn’t gone to the Jubilee, being more interested in Shakespeare’s words than the man himself (and finding the whole idea a little naff). Johnson declares Shakespeare to be the ‘poet of nature’, what’s more, he declares that Shakespeare is not best enjoyed by select quotation, but by whole plays.

“His real power is not shown in the splendour of particular passages, but by the progress of his fable, and the tenour of his dialogue; and he that tries to recommend him by select quotations, will succeed like the pedant in Hierocles, who, when he offered his house to sale, carried a brick in his pocket as a specimen.”

We listened to this recommendation of Johnson’s, as actors in another part of the garden acted out popular speeches.

We next went to the RSC’s gardens besides the river Avon. The sun was still shining, the wasps were wrestling and we supplemented our lunches with huge hunks of cake. While we sat eating, it was pointed out that all the lamp posts were different, this is because the garden contains a collection of lamp posts from around the country.

From the RSC gardens, we walked down the river to the Church of the Holy Trinity, where Shakespeare was baptised and buried. It was a brilliantly quiet place, lit by the sun through stained glass. There we saw the graves of Shakespeare and members of his family and the mediaeval font where they were baptised. The information boards in the church do a great job of explaining the rites and rituals that Shakespeare would have known and compares them with they way they celebrated now. Despite tourists, the church still felt like a living place of worship. As we left, a party of Buddhist monks in saffron robes entered.

The next place on our tour was Hall’s Croft, where Shakespeare’s oldest daughter lived with her husband who was a doctor to the rich. It was home to the most enthusiastic and knowledgable guides, who boasted about the high ceilings, the flagstone floors, superfluous use of expensive timber and multiple windows. The top rooms had an exhibition about Tudor medicine with a collection of trepanning tools and instructions on how to read urine.

After a little rest in Hall’s Croft gardens, we walked towards New Place, the home which Shakespeare died and we would end our tour. On the way we had a sneaky-peek into the Guild Chapel. Shakespeare’s father had been paid four shillings for "defasyng ymages in ye chapel” but the whitewash has been stripped back and something of them remains. They are wonderfully detailed, disturbing and peculiar paintings of the dead rising from their graves and are well worth popping in for. 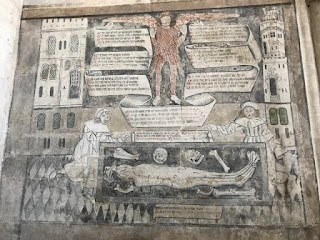 When we arrived at New Place, we found it wasn’t there. In 1759 the Reverend Francis Gastrell tore the place down in revenge on tourists who smashed his windows in for tearing down a mulberry tree supposedly planted by Shakespeare. The town were so enraged by his destruction of the house that they run him out. Now it is a beautiful set of gardens; the first a sculpture garden, the second a sunken knot garden and the last a lawn with two mulberry trees. We sat on the lawn, munching on mulberries and enjoyed the last of the sun, grateful for a very good day out.

We all had a fantastic day out and look forward to meeting again in October to tackle Henry Fielding’s ‘Joseph Andrews’.