Review: The Lives of Cleopatra and Octavia by Sarah Fielding 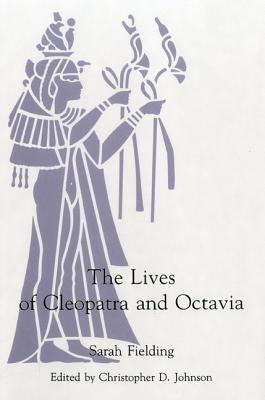 Sarah Fielding seems something of a dark horse, whether it was being ahead of the sentimental novel trend with David Simple, or being the first writer of a school story with The Governess, she was a writer who wouldn’t be contained by genre. (I’d love to get my hands on a copy of The Cry, which she wrote with The Art of Ingeniously Tormenting author, Jane Collier). The Lives of Cleopatra and Octavia is another experiment but not one that I think succeeds.

It’s a paired biography of two women from the first century AD who were both linked to Mark Anthony, as wife and mistress. My copy of the book (edited by Christopher D Johnson) went to great pains in the notes to show how much research had gone into the book, citing not only Plutarch, Suetonius and Josephus but also fictional representations of the characters by authors such as Shakespeare. The aim seems to have been to create a genuine, factual biography but to twist the telling of them for other purposes.

Although the book is biography, the lives are narrated by the women themselves who have come from the underworld to tell their stories in the first person. This seems to be a bit of a faf at one point, I came across it in the snippets of Friendship in Death by Elizabeth Singer Rowe The overall aim of the book is clearly didactic, to compare the ambitious, relentless and dishonest Cleopatra with the straight-forward and uncomplicated loving nature of Octavia and recommend the second. Like many didactic works though, Cleopatra, the negative example gets three times as much page space as the positive one of Octavia. (Also, who are people more likely to have heard of? Which is the star name on the cover?)

I can see how the first-person perspective could have worked to invigorate the biography but Fielding doesn’t fully commit to the idea. As ‘shades’ of themselves they are more objective than they were in life, able to ‘reveal those secret Motives of my Actions, which were so little known to myself’. Thus they seem too impartial and cold in describing their actions, like people blandly reading a pre-written statement, not feeling the feelings they describe that animate them. Cleopatra was clearly a fascinating person, but she has no personality in this text.

If anything, the Cleopatra part of the text becomes boring. She has no love for Mark Anthony and recounts the ways she kept him wound up in a knot of passion, preferring him angry with her than reflective, because any thought would bring him to his senses and away from her. Most of the time she plays him like a fiddle, flatters his ego, pretends to great waves of sadness or joy and is secretly laughing up her sleeve the whole time.

There was some interest towards the end when she manipulates Mark Anthony into war with Octavian knowing he would probably lose but considering it a crowning achievement to push him to lose all for her. There were also the parts right at the end where she had to make it so Mark Anthony would lose without making the world see she was betraying him but making it clear to Octavian that she was, so she could begin the process of snaring him. Then, when Mark Anthony had died in her arms, she shilly-shallied with Octavian, testing the water but when she ultimately saw the cold, calculating Octavian wouldn’t fall for her tricks, killed herself to cement her legend. (There was also a whole paragraph where, preparing for this eventuality, she tried a variety of poisons on prisoners before settling for a snake to “execute its friendly office”.)

Of course, this book uses the character of Cleopatra as handed down to us by Roman sources and they are deeply unfair. The real Cleopatra was a polymath, known as ‘the Queen who needs no translator’, a scholar and the inheritor of a declining kingdom and a dynasty with a royal bloodline with a gene pool as shallow as a puddle. Her last hurrah for the many thousands of years of Egyptian self-rule almost came true and she seems to have been a very capable monarch (even if there was rather more brother-marrying/murdering than a modern politician can get away with). To have her so resolutely bad, so predictable in her selfish choices, untouched by any love or affection made her all the more boring.

The Octavia stuff is shorter and does nip along far quicker. I was interested in her description of perfect first husband, Marcellus because Sarah Fielding doesn’t merely give us the list of rational virtues we expect but lingers on the fact that he was also fun, funny and full of imagination. “He gave way to his Imagination, loved to indulge it; and from the most Trifling Circumstances could derive Pleasure and Amusement.” The notes stated that this characterisation of Marcellus comes from no other account, so I presume it must be a description of the kind of person Sarah Fielding was attracted to, someone who could be enjoyable to be with as well as good - I found it quite touching. Then Marcellus dies, Octavia is pledged to Mark Anthony but he goes off with Cleopatra and we largely get repeats of what we’ve already heard but from a slightly different perspective.

Sad to say, the part of the text I found most engaging was the list of subscriptions. I liked finding names I knew, such as Richardson (who worked with her on other projects) Garrick, and her brother’s friends like Hogarth and Saunders Welch the Bow-Street Runner.

That said, I respect Fielding’s ingenuity, for trying a different kind of book and if it didn’t quite come off this time, it doesn’t mean it wasn’t worth attempting.