Review: Peterloo: The Story of the Manchester Massacre by Jacqueline Riding 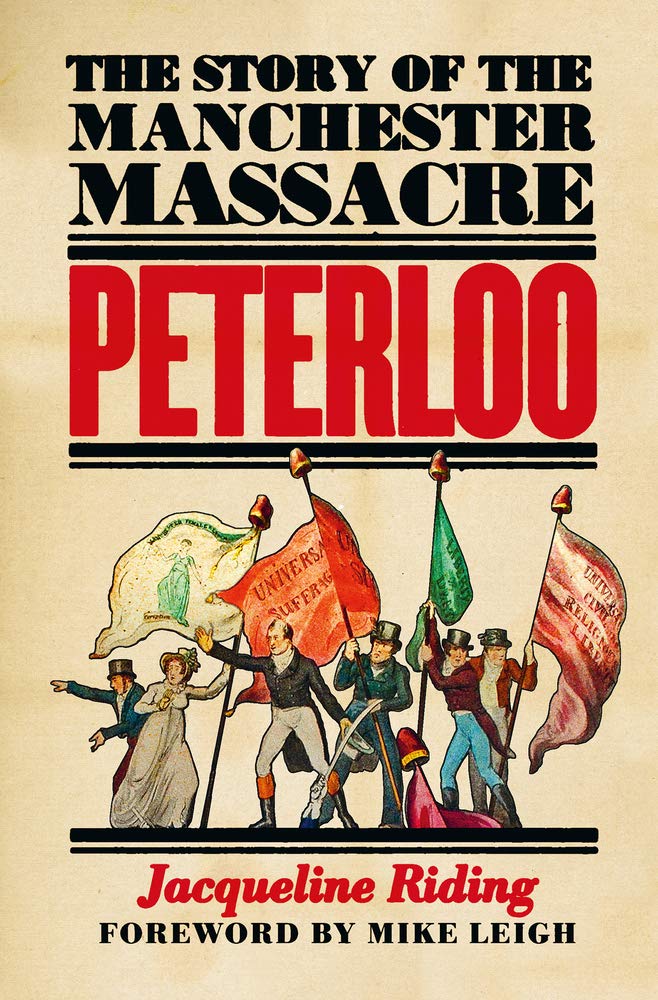 I read Jacqueline Riding’s book Jacobites with the Dr Johnson Reading Circle and was excited to receive a copy of Peterloo: The Story of the Manchester Massacre in a ‘name-that-Hogarth-from-the-detail’ competition and, seeing as the 203rd anniversary anniversary occurs on the 16th of August, I’d read it.

In Jacobites, Jacqueline Riding shows how skilled she is at taking a complicated series of events with many players and shaping them into a text that is both engaging and coherent and she does the same with the story of the Peterloo massacre. I knew a little about it from ‘Victorians’ text books from school and I’ve seen the Sharpe episode with the Peterloo equivalent but beyond the headlines, I didn’t know the details. Peterloo: The Story of the Manchester Massacre told me a little more than I needed to know, gave me  a feel for the times, the tone of the language, the arguments in the pub and kept clarity and narrative momentum.

We begin with the rise of Hampden Clubs, meetings of working men sharing ideas of political reform - particularly about changing electoral constituencies to get rid of rotten boroughs and a desire for a vote per man (there wasn’t yet discussion of women’s suffrage, but it was considered a vote per man was one per household). These clubs were boosted by solid Sunday-school education and inspired by thinkers like Tom Paine as well as reading and sharing cheap newspapers. With waves of soldiers returning from Waterloo, a distant volcanic eruption that killed harvest and the Corn Laws which brought food prices up but did nothing to bring wages up with it  - the government were scared. It wasn’t helped that the official government position seems to have been ‘it’s not our fault’.

After multiple petitions were ignored, the reform groups decided to increase their pressure, one tactic was the ‘blanket protest’. Reading that it was a crime to present a petition in groups more than ten, it was decided to send a mass petition but to take it in multiple copies in small groups - all of them walking from Manchester to London and carrying a blanket to sleep outdoors. With Habeus Corpus suspended, the ‘blanketeers’ were arrested as they left the city, with the urban myth that only one man made it.

The next idea were ‘monster’ meetings, huge rallies with popular speakers designed to show how strong support for reform was. The plan was a series of huge meetings, culminating in a large Manchester one for the north, and a large Kennington one for the south. The magistrates of Manchester started getting nervous, organising a volunteer cavalry called the Yeoman and drafting volunteer constables. It wasn’t helped that the government were sending agent provocateurs to stir up trouble, nor that some speakers were appealing to audiences with more violent rhetoric. What’s more, bodies of men were training on the moors, learning to march in formation. Was this a way of ensuring calm and orderly movement en masse, or was this the training of working class fighting bands?

It wasn’t only men involved in the movement to reform, for the first time women formed organised groups. The first was in Blackburn, followed shortly by the Manchester Female Reform Society, led by Mary Fildes - one of those people in history that ought to be better known. I loved the moment dramatised in the book where the women are asked to vote for something for the first time and the atmosphere of nervous laughter grows to one of pride.

This moment comes from the autobiography of Samuel Bamford, as do many other sparkling and vivid descriptions. A poet as well as a radical, Samuel has a sharp (and sometimes withering) eye for describing other people. Riding hits a motherlode with his descriptions, whether it’s Sidmouth with his 'cavernous orbs' of eyes or Nadin with his 'full-size head'. There’s also a wonderful moment where he describes his beloved wife 'as fresh as Hebe'.

Other interesting people in this book include Dr Healy, whose accent is so thick he can’t be understood by his interrogators and who hands his proscriptions out with pro-forma cards that he fills numbers in because he’s illiterate. He tempers this with an excessive dignity which has him trying to act the gentleman even as he’s being arrested. He also created the most peculiar banner to take to the meeting - stark black and white, threatening looking even as the text read ‘love’. I was also drawn to Joseph Nadin, the Deputy-Constable. He struck me as a prot-Gene Hunt, fond of catching ‘his guy’ and certainly not afraid of violence. Despite originally being a thief-taker and having corrupt habits carry on after his more formal appointment, he redeemed himself a little in my eyes as using himself as a human shield against the voluntary constables when they tried to beat up the man he was arresting.

I may seem to be avoiding the actual massacre, it is the climax of the book after all. Throughout, Jacqueline Riding ratchets up the tension, discussing preparations on both sides and the growing paranoia of the authorities. Like the greatest tragedies, the massacre at St Peter’s field could have been easily avoided. As the size of the crowd grew, the authorities got nervous and sent for the Yeoman, the volunteer cavalry, who were drunk, clumsy and unskilled. The killed a 2 year old on the way to the field and then proceeded to wade into the crowd, trying to clear them with the blades of their swords. As one eyewitness said, “At Waterloo there was man to man but at Manchester it was downright murder.”