Mini-Review An Entertainment for Angels by Patricia Fara 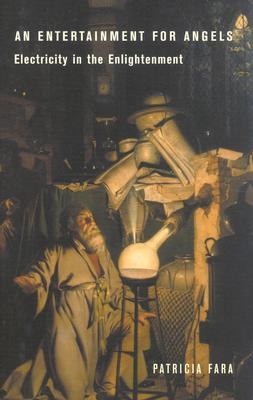 An Entertainment for Angels is a bit of a cheat. It looks like a full account of electricity in the enlightenment age but if you look carefully, the text is a little larger and spaced out than usual and the pages are on thicker paper, almost as if the book is a shorter one trying to look like a larger one.

So, it’s not as deep an experience as could be hoped for but it is an enjoyable romp through several decades of electrical history, with a particular emphasis on the showmanship of early electrical research, the piecemeal nature of scientific advance and the odd way in which advances in equipment came first and theory had to catch up.

One of the most enjoyable elements of the book was how knowledge of electricity and discovery of its effects grew up from a sense of play. The first battery (so named because like a battery of guns, the effect was increased by grouping them together) was discovered by accident. It was then used to attract objects to suspended orphans, or electrocute 400 monks. I particularly liked the story when the trick didn’t work and the current kept dying at one particular monk. They started to suspect the monk might be a woman in secret (though why that should break the current, I’ve no idea) but it turned out to be because they were standing on a wet patch of ground.

I loved all the talk of pranks and tricks, the cutlery that shocked the dinner guests, the hidden electric ‘mines’ in one person’s house. I loved how silliness built up phenomena to see and evidence which then led to electrical theories. I followed the description of the electrical theories pretty well but now I think I understand the false ways that eighteenth century scientists thought electricity works more than I understand how electricity actually works.

I very much enjoyed this book as a run through of electrical science in the 18th century, it told its story well, was very entertaining and gave me a few new ideas to play with. It wasn't enough to write the full article I was hoping for though.