A few thoughts on Bridgerton 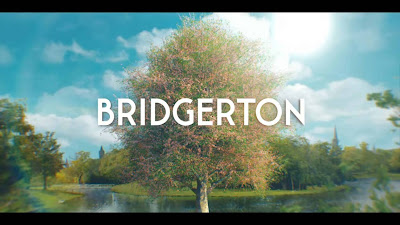 One of the benefits of focusing on the eighteenth century is that the century can be as long as you like. Some centuries are confined to a hundred years but the eighteenth can go long, it can go back as far as the ‘glorious’ revolution of 1688 or reach forward as far as yesterday dinner time (or, more usually, the Battle of Waterloo in 1815). This means I could have the period known as ‘The Regency’ easily within my grasp for this website if I wanted to. There are times where I have dabbled in the time period but if I’m honest, I prefer the early to mid eighteenth century and leave all that Regency stuff to other people. I did watch Bridgerton, however.

To claim that Bridgerton has anything other than the most dubious links to history (or indeed reality) is a risky one indeed. I’ve not read the books, but the TV series has more to do with the tropes and foibles of the genre of regency romance than anything else. It’s funny because a  great deal of historical romance, even the bodice-ripperest, can be the result of very careful research, but Bridgerton is not. Claiming to be set in 1813, this is a Regency without the Prince Regent. George III is ill-disposed and his madness and outbursts are largely played for sentiment. The person with the Royal powers and prerogatives is Queen Charlotte.

This Queen Charlotte is a wonderful figure, narrow-eyed, capricious and scheming but humanised by her love for the King and pain at his illness. She’s nothing like the real Charlotte, who was a fond patron, particularly of natural sciences, but regarded as quiet and rather shy. The strangest part of the entire series was a discussion about Charlotte, where it is revealed that her and the King’s love ended slavery and allowed black people to be treated as equals and even be made Dukes as Duchessess. While it is true that Queen Charlotte and a number of the nobility are played by black actors, I had presumed this was an act of colour-blind casting like Armando Ianucci’s very enjoyable The Private History of David Copperfield. It seems completely strange to change the history of the world in the show to justify colour-blind casting the audience would have simply accepted as part of the fiction.

(I've been watching videos on youtube about Bridgerton and there's a really interesting angle of colourism at play also, that the darkest skin character is the closest thing to a villain and most of the black characters are of lighter skin - not to mention the lack of any Asian named characters. A great video on that is found with this link. )

The main story in the series is about the romance that blossoms between Daphne Bridgerton, daughter of a Viscount, and Simon, a man who has come to sort his affairs out after his father has died and he has inherited the title of Duke of Hastings. They decide to pretend to be in love, he to keep predatory mothers out of his hair and she to raise her stock in the marriage market. It should come as no surprise that what starts out as pretence becomes truth. There are also the romantic and social lives of those around them, the wealthy and titled individuals who make up the ‘ton’.

The story takes place over a London season and is sharply and enjoyably narrated by Lady Whistledown, a pseudonymous gossip columnist that’s a cross between The Female Tatler and RIia Skeeter. Her spiky commentary is one of the most enjoyable elements of the programme and (along with Lady Danvers) a source of its spice and fun.

From the trailer, I was expecting even more humour, although it leans more into drama. I was also expecting the Bridgertons themselves to be more scheming, possibly a down on their luck family hoping to make it big. Instead they are a well-to-do family with a warmth that is quite charming. My favourite character was the second eldest Bridgerton daughter, Violet. She could be described as a woman out of her time but seeing as the programme isn’t really of a time, she seems simply a snarky, funny, rather naive bookworm. My other favourite characters include the battleaxes Queen Charlotte and Lady Danvers. The men are a little more slim pickings, but Lord Simon really is very attractive, if a little brooding and needy, and his boxer buddy is a grounding influence.

The programme looks gorgeous. I was slightly distracted by bits of Bath (I was at the assembly rooms the day before they started filming) and other places I recognise but they are stitched together to make a lovely fantasy version of London and Grosvenor Square. There aren’t many productions where I am blown away by the wallpaper, but there are some beautiful wallpapers in this production. The costumes are, of course, something special as well. Daphne, in particular, has a number of very attractive dresses, in shades of blue, particularly sky blue. My favourite was this dress; 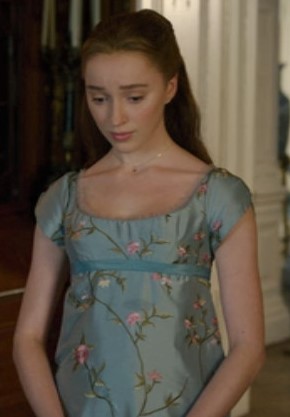 .. though she’s not particularly happy about wearing it. I liked the shape, the sheen and the flowers. I don’t know much about fashion or costume history, but I appreciated what I saw.

In terms of drama, there were some brilliant moments, I loved the moment in the Inn with Daphne and Simon when they finally talk plainly to each other. It could be because much of the plot is one where if the characters spoke straight to each other, nothing would happen and it was cathartic to have them actually do it. The women’s ignorance of how babies are made first comes up as a joke but becomes a plot point, highlighting the innocence with which the women are entering into marriage. I shortly plan to read The Memoirs of Emma Courtney by Mary Hays which implies in the blurb that it will also be looking at women’s education, particularly sex education.

Although there is big drama, it’s not a programme to take heavily, it’s well-made and enjoyable entertainment designed to binge. I did, however, find the accumulation of obstacles and problems throughout the episodes to be rather exhausting.I reckon most people who were inclined to watch Bridgerton have already done so by now, but I would recommend it and look forward to the second series.