Under the Glass: Readers in Fiction 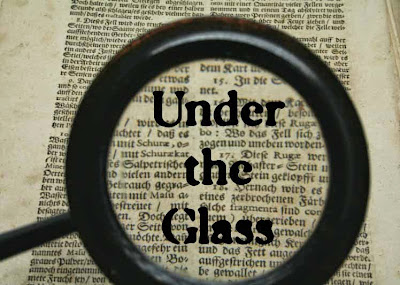 Dan Brown famously says that he doesn’t read. Particularly, he doesn’t read fiction, preferring instead to use non-fiction to research his own novels but not reading anyone else’s. It shows in his writing. On the whole, writers are readers. I would consider myself a reader first, who occasionally makes forays into writing when I’ve filled my head with so many words, I can't help them spilling them out now.

What I find unusual, is how rarely the characters in books are readers, especially as they are the creations of writers who invariably are. How often has a writer (usually in a mid-career slump) written about a writer, usually with a dissatisfying love life? Writers love writing about writers, especially about how special writers are, or what an emotional strain it is on the writer’s life. What’s interesting is that it’s very rare for these fictional writers to ever read anything. Real writers might be readers, but fictional ones are often as literate as Dan Brown or Garth Marenghi. 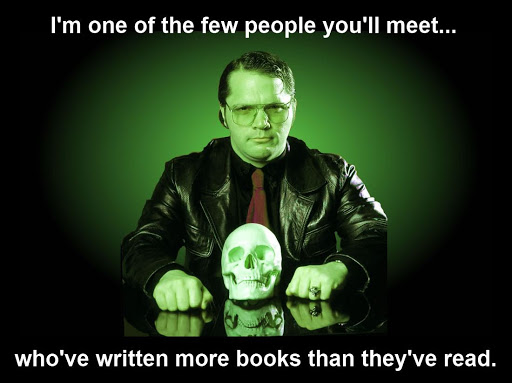 My own Sidney Derrick is a writer, but his illiteracy is one of the principle jokes of the book. (On a slightly related note, it really annoyed me in The Seed Collectors by Scarlett Thomas, when a professor and student of the eighteenth century spent their whole time talking about Derrida and never mentioned or read an eighteenth century author.)

Currently, I am reading The Female Quixote by Charlotte Lennox, which is about a woman who is delighted by reading, so delighted she uses some quite unsuitable books as the basis of her worldview and the influence of her action.  She follows a certain ‘type’ of reader to be found in books, the reader who can’t handle it. This reader is unduly influenced or cannot tell fiction apart from reality. We start with Don Quixote, driven mad by books of chivalry then onto Lennox’s Arabella, whose devotion to French romances may be less dangerous to those around her but make her seem ridiculous. Also looking silly is Catherine in Northanger Abbey, whose love of gothic fiction makes her expect a life more dramatic than it may be.

Novel-reading was itself a full moral panic at one point, the Gentleman’s Magazine (Samuel Johnson’s first London gig) said;  “Novels have been long and frequently regarded not as being merely useless to society, but even as pernicious, from the very indifferent morality, and ridiculous way of thinking, which they almost generally inculcate”. The people most at danger of corruption from books, especially novels, were women as their poor minds wouldn’t be able to cope with the strain.

Then there is the character for whom reading is a source of power. Matilda is the first example of this most people meet, she must be one of the keenest readers in literature and all that mental pressure gives her literal superpowers. Slightly different to Matilda are those characters like Frankenstein’s monster, who learn to speak and then read, actions that give them more agency. In The Testaments by Margaret Atwood, women have not been taught to read and it is a source of enormous power when Agnes Jemima is taught in order to become an Aunt. Although the reader for power is often an interesting and exciting one, they don’t usually have a ‘normal’ relationship with books, often being denied them in ways not so common in everyday life.

Another form of reader in books are those who are keepers of words. A little like the reader of power, they are a character who have an exceptional relationship with books in some way. My first thought is The Professor in Mistress Masham’s Repose by TH White, but his Merlin would also fit the role. Many of these figures are old men or wizards, keepers of arcane bookshops or hidden, magical libraries. They frequently are not the protagonist in a work though, and frequently pop up to help and then disappear.

The last sort of reader in fiction I can think of is the reader as set dressing. The example that instantly jumped in my mind was of Anastasia Steele from the Fifty Shades of Grey trilogy (I’ve read the first one). At the beginning of the book, she’s studying Literature at college, is given a first edition Tess of the D'Urbervilles (these characters have a magical way of obtaining first editions of things) and quickly finds herself chief editor at a publishers.  Yet, despite her love of books she never really seems to read and the books she’s read don’t seem to impact her. She’s far from the only character to have the light sprinkling of ‘into books’ to help her characterisation, but she’s a pretty clear example.

I’d like someone (maybe even me one day) to write a novel in which the main character is  a reader the way I am. Who spends significant time reading, who finds thoughts of current books or future books intruding as they do other things, who see books not as an escape from life but a general part of it. I honestly don’t think I’ve ever read a book featuring someone who has that casual yet intense relationship with the written word and I think it would be something worth reading one day.