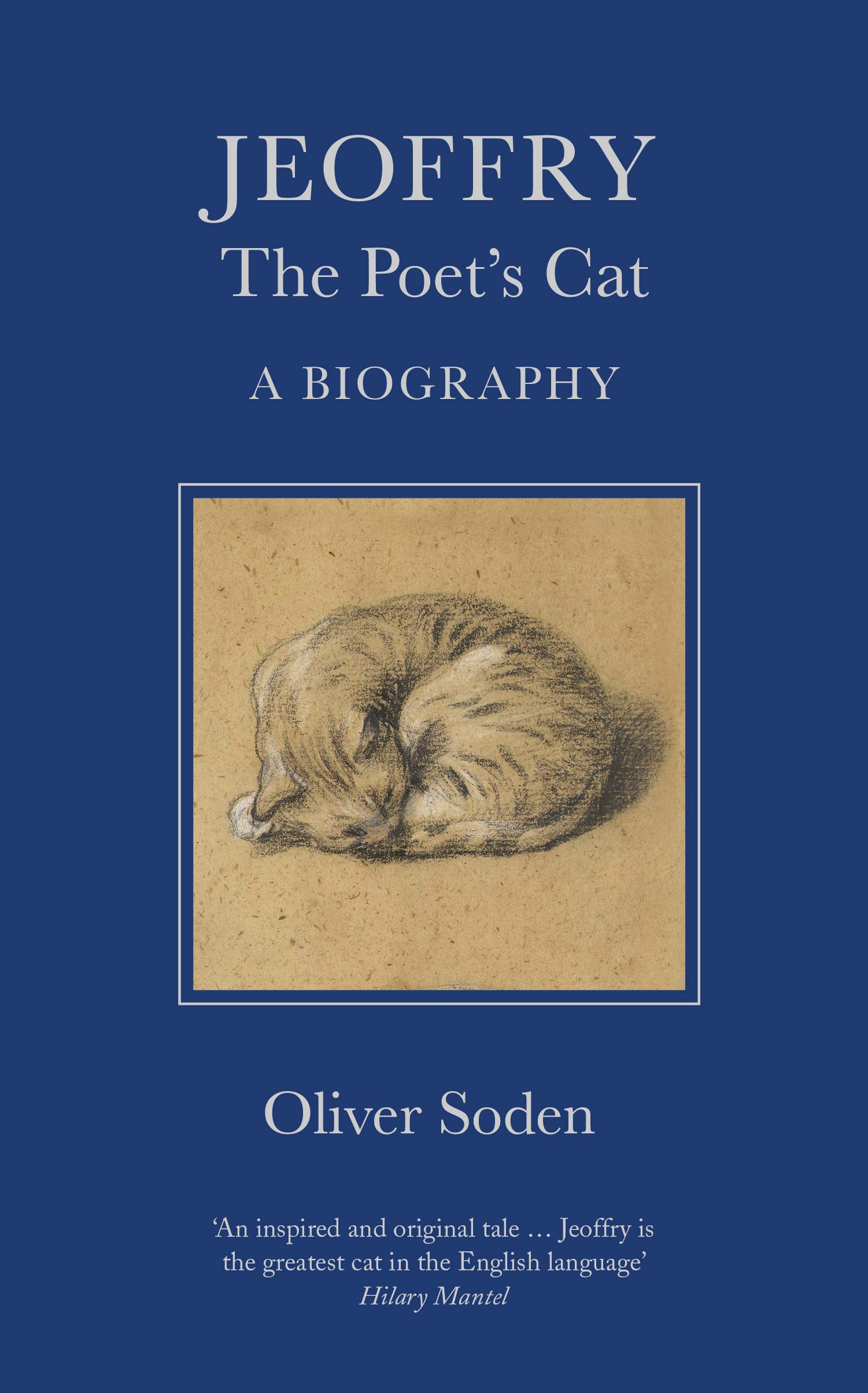 One of the troubles with being a Christopher Smart fan is that there’s a limit on how much there is to read so I was extremely excited when something Kit Smart related popped up on my Twitter feed, I was even more excited when I saw the unusual nature of this project.

Jeoffry the Poet’s Cat is the biography of a cat. Namely the one which Smart praised in Jubilate Agno, a section of the book which is now so widely anthologised I can easily lay may hands on a copy at the primary school I work in. As there’s no more information about Jeoffry than appears in the poem, there’s a fair bit of poetic licence, creating a wonderfully indefinable book presented in language that is both wonderfully simple yet detailed.

Our imagined backstory for Jeoffry has him born in a cattery, or brothel, because of course he is, not just for pun related reasons but to let Jeoffry (and the reader) explore the world of eighteenth century sex for sale and Covent Garden in general. He spends his kittenhood “underneath the bed” while his owner, a prostitute called Nancy spends her time “underneath a cavalry officer.” His early pranks involve scattering venereal disease pills and his favourite toys are the re-washable condoms, his claws probably making them even less useful than they were anyway. We also briefly meet a lord who likes to be treated like a baby.

As Jeoffry gets older, he starts to explore more and we get a cat’s-eye view of the variety and life of Covent Garden, from the market stalls with their rotting vegetables, so a glimpse of the king outside Drury Lane theatre. He becomes a favourite of the doormen at the opera as well as the theatre, is stroked by an actor with a pleasing voice and jostles with strange cats.

“Of dogs, and his encounters with their noxious enthusiasm or salivating rage, we shall not speak.”

Alas, even brothels as well-connected as Mother Douglas’s are raided at times and in the confusion, Jeoffry finds himself with a young volunteer constable. Oliver Soden has a very skilful way of telling parts of the story from Jeoffry’s perspective, getting right down among the legs and shoes of the other characters, feeling his fear and injury as the raid happens as well as his lack of understanding, but then pulling back to giving the historical and character context. This is done so smoothly that the changes of point-of-view never jar.

The scene where Christopher Smart and Jeoffry are introduced is beautifully done. Each is wary of the other, nursing a distrust but also a longing to connect. Their meeting is a delicate wordless series of actions, tentatively done after which the book admits that an accurate portrayal of the moment can’t be described. Then the reader is taken back to find out a little more about Smart as he is, though a supporting player, is a major one.

The book gives a really good overview of Smart as a person and a writer. That he was from an upper servant class, that he became a sizar in Cambridge where he worked hard to become a fellow. That his sense of fun and his poetic gifts took him to London where he entered the Grub Street pattern of ‘conveyor-belt churn-out and genuine inspiration’ and that he married the step-daughter of Newbery, the publisher. I’d have included the transvestite revue shows in there but I can see they complicate things a little. The exact timeframe of the next events are a little unsure and Soden does well to turn them into a coherent narrative; Smart gets sick and upon his recovery decides to take instructions from the Bible to pray at all times literally, where he stops traffic in St James’s Park. The book admits that the exact cause (and extent) of Smart’s madness is unclear and has been debated about; with no-one certain whether it was a manipulation by his father-in-law, whether it was bi-polar disorder hinted at by Smart’s admission that he has ‘a greater compass for mirth and melancholy’ than other people, or whether it was stress deepened by an alcoholism that was notable even in those alcoholic times.

For whichever reason, or combination of reasons, Christopher Smart ended up in a private madhouse, where he started writing Jubilate Agno, a poem built on a Hebrew model that involved call and response lines. In this case the call lines starting with ‘let’ and the responses with ‘for’. There’s the suggestion in the book that sometimes Smart wrote ‘let’ lines without their corresponding ‘for’ and vice versa, though I am more inclined to think that corresponding lines have simply been lost in the manuscripts many journeys. However, the book is very accurate in how Jubilate Agno stopped being a just a poem and also became a way of marking time, of recording his thoughts and feelings and trails off into an almost mechanical act.

One of the fascinating elements to how this part of the story is told is again the viewpoint of Jeoffry. Both the poet and the cat find themselves in the prime of their lives but locked in a small room with access to a little garden. As such imprisonment for Smart is also imprisonment for Jeoffry and this diminishes the cat just as it did the man. However, there are moments of company and ‘Jeoffry made occasional contact with distinguished legs’, including Johnson, Burney, Garrick and Oliver Goldsmith. Now, I love Goldsmith almost as much as Smart and he so rarely makes an appearance in things that I treasure him whenever he does. Now, it makes sense, Goldsmith was a closer friend to Smart than Johnson, sharing a publisher and a circle of friends that included lesser poets like Samuel Derrick. However, Goldsmith is portrayed reading out his novel in progress, doing the character’s voices and making Smart laugh. While I don’t doubt Goldsmith would make him laugh (and I love the image) I can’t imagine him reading from a work in progress, but that could just be me.

The peculiar ease with which Smart was broken out of the mad house is well done, leading to (perhaps) the sadder part of his life, as a hack with his reputation shattered and no luck at all. Jeoffry makes the most of freedom to again explore, where of course he meets Samuel Johnson’s cat, Hodge. We follow Hodge back to Johnson’s living room to hear most of the Samuel Johnson ‘bits’ about being as happy to pray with Smart as anyone else. Though we don’t get Johnson’s assessment of Smart’s poetry, where upon being asked who was better, Smart or Derrick, he replied, ‘Sir , there is no settling the point of precedency between a louse and a flea’.

From Jeoffry’s point of view, this is a particularly sad time, as Smart’s need to churn out words and lack of money ground Smart down bit by bit. The man who had elevated his cat with poetry and viewed him as a natural worshipper of God, now had little time for the animal and his ‘reek of despair was unmistakeable’. We get a beautiful rendering of Smart’s friend John Kempe playing his flute for him, ‘the notes hit the panelled walls and died instantly, falling to the floor to lie at Smart’s swollen feet like faded rose petals’. I do have a quibble with this section though, as many of Smart’s writings from this time have a fragile yet definite hopefulness, this is when he wrote the words ‘we never are deserted quite’ and found himself helping other people with money he’d been given for himself. I don’t think Smart ever gave up hope as he does in this book.

The last part is with Jeoffry as an old cat, living in the countryside and gradually losing his faculties until he lies down for one last sleep. ‘Nothing sweeter than his peace when at rest.’ It’s a fitting choice for a last sentence, leaving poor old Jeoffry with the dignity he deserved.

In many ways, this is a book crafted of bits, many of them from other books and all of those bits are ones I’ve encountered before, this being possibly the only book I’ve encountered where I’ve already read the entire bibliography. What makes is brilliant is that the author has clearly read their own bibliography (unlike Catherine Arnold in her Bedlam book) and the way those bits are put together and presented. They tell an entire story, taking in many interesting aspects of the eighteenth century, the shadowy interplay of brothels, theatres and authors to Smart in his private madhouse in a way that is both melancholy and dignified.

While enjoyable to a fan of Christopher Smart and the eighteenth century, this would be an even better present to someone to introduce them to the world and characters and let them dip their toes in (and would make a really good half-hour animation, I think).