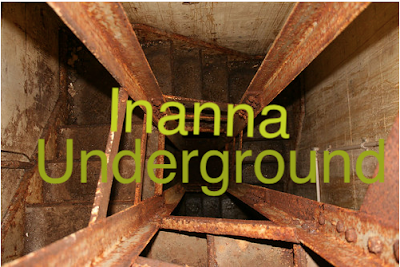 I haven’t talked much recently about what I’m writing and Grubstlodger was a place where I intended to intersect ideas of eighteenth century writing and my own scribblings from the outlands. Currently I’m working in a psychological thriller called Inanna Underground and to help structure the thing in my head, I wrote a little blurb/pitch.

The Cricklewood branch of a bunker enthusiast club meet on a cold, September morning, excited to open their pride and joy to the waiting public. During safety checks they make a grim discovery. Inanna had joined them the winter before and her unpredictable joie de vivre had changed the life of each member for better, worse or both. Now her body is lifeless in their prize bunker.

I’m really enjoying writing this book, it’s a little different to my usual novels, with a tighter plot and style, dealing with the intricate social connections of a small group of characters. It came from an unexpected pairing of two semi-ideas for novels floating about in my head and gave me that very satisfying feeling as more and more pieces clicked into place.

However, I have two main misgivings as I write the text:

The first is the horrible cliché of starting with a woman’s body being found which I generally find a pretty loathsome way to start a story. I tried recasting the body in the bunker with the other members of the club but only makes sense if its Inanna. In my defence, she’s not an inciting incident but the main character, most of the book tells of her interactions with the other club members and I can promise the solution to the mystery is not as hackneyed as a killer.

The other is the narrator. Stuart is one of the members of the Cricklewood branch, a man with an obsession for detail who is proud of his lack of imagination, which he thinks makes him more accurate. My hope is that there’s a sense of tension, and even humour, between Stuart’s detailed account and the big picture forming in the reader’s head. If I pull his style off, I think it’ll be something pretty special, though I’m not exactly there yet.

I’d be interested in what anybody thinks of this piece from the glimpse of it and if anyone has books of a similar nature they could recommend I try.