Review: ‘The Basilisk of St. James’s’ by Elizabeth Myers 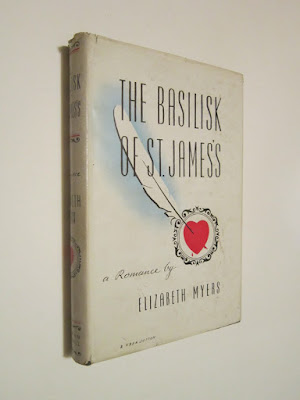 ‘The Basilisk of St. James’s’ by Elizabeth Myers is another one of those basement of a Charing Cross bookshop discoveries that occasionally reinvigorate my reading. It tells the London adventures of Jonathan Swift during the end of Queen Anne’s reign, from the ousting of Marlborough to being sent back into Ireland. In this novel, Swift is pulling the secret strings of government, hating humanity with a passion, having secret passions to reform humanity, detesting all womankind with all his passion… and falling in love with a woman.

I think I hated this novel. I certainly left the novel with a feeling of hatred. What I couldn’t decide was whether I was supposed to feel that hatred. Certainly, I felt there was more happening in the book than I was understanding. Whether my feelings of disgust are a result of my attitudes as a reader, or a result of the book itself was something I couldn’t decide. Was it a bad book or did I not just read it right?

My first reaction to the book was a feeling of it being overwritten. I wrote the phrase ‘flagrant graveyard depths of his mind’ as an example of this overwriting but I could have picked many phrases from every page. Not only was the book overwritten but it frequently felt overstuffed. Page 17 was one I picked out in particular, it’s a description of Swift walking through London and the page is packed full of lists of different jobs, types of people and buildings. Never did the book let up on this denseness.

Even in the quiet moments, the page is stuffed with the characters’ thoughts and feelings. What’s more, the point of view swings wildly around, sometimes being very close to Swift, then to other characters and then somewhere in the middle. When we explored a character’s thoughts, they were as stuffed and overwrought as the main narration and as every other character. The combined effect of all this, is that I was constantly exhausted to no particular end.

Using my notes to write a review of this book is difficult as they are so repetitive. For my third note I wrote, ‘are they going to keep calling Swift great?’. A few notes on I wrote, ‘I hope they stop telling me how great Swift is.’ A little later I wrote the quote, “hampered as he was by the extravagant and extraordinary outlook of his genius.” A little later I write frustrated, ‘narrator repeatedly tells us how vital and important Swift is.’ One of my final notes reads, ‘Why does everyone have long, detailed thoughts about life, love and how great Swift is?’ Obviously, I was getting a little irritated with being told of Swift’s greatness. What made this worse was that I could never believe that Swift (in this book) was great, only that he sincerely believed he was.

In terms of plot - there isn’t one. Things happen. Some of them are Swift’s interminable political wrangling, some of them are bad romance and some of them are strange, like the scene where he went into a brothel and was led to the corpse of a woman he had once known. I think the purpose was to use the political stuff to show Swift’s political clout, the weird, grimy stuff to show us his misanthropy was justified and the romance stuff was supposed to be the core of the book - but it all simply piled on each other.

I’ve read a few of Swift’s works and found them sardonically funny. The only biography I’ve read of him is the one Samuel Johnson wrote for his ‘Lives of the Poets’. Johnson sees Swift as a vicious, misanthropic man whose hatred and lack of connection with humanity make him a bad writer and a worse person.

Peculiarly, Elizabeth Myers seems to see Swift in exactly the same way and seems to love him for it. What I couldn’t decide was whether Myers admired Swift his misanthropy or happened to enjoy writing it. There are so many ‘people are evil’ chunks but even more ‘women are especially evil’ parts. Is Myers a misogynist, or just have fun writing women-hatred stuff? What made the misogyny even stranger was that this is a love story.

Swift, who hates all people, especially women, falls in love with a woman he calls Vanessa. His hatred of women makes romance a little difficult. He mainly hates the woman he loves but sometimes he loves her but he never gives her any real love and what’s worse, she is fine with that. He mainly views women as malleable clay to mould his own personality on and seems to love them as only extensions of himself. At one point Swift and Vanessa have sex but it’s disappointing for him because he can never escape his own massive, earth-shattering ego. If he can love, he simply won’t because that would mean giving a part of himself.

By the end of the book, Swift has been sent to Ireland where he locks himself from all people and Vanessa has followed him. The last pages of the book present her as a hero for wasting all her love on someone who can’t and won’t return it. Was I supposed to regard her wasted life as a noble sacrifice? I couldn’t ever decide. My final note on ‘The Basilisk of St James’s’ was, ‘what is this book?’

The language kept reaching towards the notion that it was saying something important but I couldn’t work out what it was saying, or even the vague area it was trying to say something about. Was it about the price of genius? The immanence of love? The dirty, nasty, ego-centric mania of humanity?

I think that the book began with Myers’s love of Swift, her interest in the idea of a noted woman-hater falling in love and the implications of that love. I think the over-reaching, gushing tone, the horrible moral about how great romantic sacrifice is, and the hatefulness of Swift’s character were all results of her sincere desire to create something epic out of the material.

There is a little part of me though, that thinks that she may have been doing it all as a sardonic joke and even the overblown style is a comment or parody of some grand love narrative. If this is all a joke, then it’s gone over my head and if it isn’t… eesh. Either way, I would like to read another of her books just to get some sort of handle on this one, so in the end, she wins… sort of. (This book was so muddled even the review is).