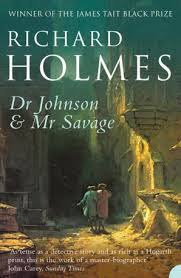 It’s an open secret that the image of Samuel Johnson which has gone down in history is not the one who created most of the great works he was famous for. It wasn’t until after the ‘Rambler’, ‘Rasselas’, ‘Dictionary’ and his poetry that he became the ‘Great Cham of Literature’. During the time Boswell knew him, he was comfortably off with his greatest struggles behind him.

This book tells a story before the safe, rotund old man - when Johnson was a skeletal, thuggish looking man carrying a large cudgel with which he single-handedly saw off four attackers. What became grouchiness was once outright aggression; what became fun political knockabout was once dedicated extremism and what became a healthy disdain for the wealthy was once a hatred for all rich folk.

As well as being introduced to this young, aggressive Johnson, we also meet his new bestie, Richard Savage. Having met him in Johnson’s description of his life, this new version of Savage is infinitely more…psychotic. Johnson’s Savage had a legitimate complaint in being denied his birthright as Lady Macclesfield and Earl Rivers bastard son. Richard Holmes’ Savage is most likely deluded in his belief but he certainly never seemed to question it. Where he is pursued by his evil mother in Johnson’s version of the story, he is the pursuer here, Poor Lady Macclesfield is stalked by Savage, who breaks into her house and continues a literature vendetta against her which culminates in the (wonderfully vicious) poem, ‘The Bastard’.

The endearingly childlike Savage of Johnson’s life is replaced by a more knowing, cunning person. When he mets young Samuel, Savage tends to keep him apart from his other lives, hiding his suaver and more successful elements from Samuel’s sympathy. Holmes also reveals that Savage was far more successful person earlier in his life than Johnson ever registers. At one point he had two houses, one in London and one in the Richmond countryside. At this time, he was also part of a circle including Aaron Hill and James Thompson (of Seasons fame).

This period of success was interrupted by his murder trial. The chapter about this sequence of events was the highlight of the book. As well as going through the trial transcripts and literature around the trial with meticulous detail, Holmes also explains in parallel how Johnson presented the trial in his own telling of Savage’s life.

That said, Holmes still manages to create a picture of a fascinating and strangely likeable character - how Savage still remains a captivating person is a mystery to me but I appreciate a charismatic arsehole in life. It is helped that I love his poetry, it's strange and vigorous with an almost romantic mode of drama combined with an Augustan mode of expression

This isn’t a long book but it is a thoroughly engaging one. Richard Holmes evokes a radically different version of Johnson and describes a fascinating portrait of an infuriating and enticing man in Savage. Their friendship feels real, their world disturbingly grimy and their story an important one.