Review: The Life of Mr Savage by Samuel Johnson


I was aware of Richard Savage because of his mention in Samuel Johnson biographies and the fact that Johnson wrote a biography about him but until recently I hadn’t followed him in any great degree. This was until I was looking through my anthology of eighteenth century poetry and came across a fragment of Savage’s poem, ‘The Bastard’.
I found the fragment so alive and angry that I downloaded the whole thing. Even the title is a confrontation, I couldn’t take it in to work and leave it on a desk, it was too shocking. The poem begins with Savage swaggering, declaring that a bastard is a vital force, ‘No sickly fruit of faint compliance he!’ He then goes on to boast of the bastard as, ‘nature’s unbounded son, he stands alone’.
The poem goes on to ironically praise his mother for producing him as a bastard. As he praises his mother, the tone starts to become more self-pitying. He starts to lament the lack of care and support, the fact that ‘no Mother’s care, shielded my infant innocence with prayer’. The poem then ends with the mother spurned for a better mother, the ‘Majestic Mother of a kneeling state’, namely, Queen Caroline. The poem shocks and surprises in its short run, and I was left wondering what extraordinary man wrote such an extraordinary poem?
Luckily an even more extraordinary man wrote an account of his life. Samuel Johnson was a young man, a hack writer and a few years from his Rambler and Dictionary masterpieces. However, this is regarded as a major work of biography in its own right, mainly because of Johnson’s insistence to write about Savage in as fair and humane way as he can. Savage could be puffed up as some tortured genius, better than all those around him; or he could be represented as a pointless, leeching, tramp with a flair for a nice phrase. Johnson treads a line between the two, always weighing the good and bad elements of Savage whilst providing plausible reasons for those characteristics and actions. It is in many respects a very modern biography.
It begins with the typically Johnsonian question of whether the lives of great people are often tragic because great people are more likely to attempt and fail great enterprises; or whether great people have ordinary tragedies that seem greater because we look more closely at their lives. He then to describe Richard Savage’s own tragedy, and main impediment to greatness, the circumstances of his birth. 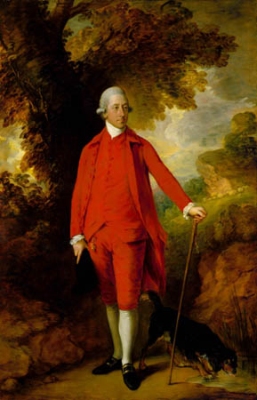 Savage claimed to be the illegitimate child of Earl Rivers and the then Lady Macclesfield. He claimed that his mother had shipped him out to a nurse, blocked any inheritances his way, tried to get him shipped to America and even tried to influence a court case that would have him hanged. She claimed he was an impostor. The truth will probably never be clear, but what is clear is that Johnson believes the story and Lady Macclesfield is presented as the villain of the piece. What is more interesting is what Johnson does with this information, he uses it as the basis of his whole reading of Savage’s life, telling it as one full of brushes with greatness, almost success but ultimately success frustrated at the last moment.
Even more interesting is how Johnson uses this early, central drama to anchor and explain Savage’s personality. Savage’s inability with money, his pride and haughtiness all come from Savage’s own noble heritage and expectations for himself. The constant rejection from his mother give him the volatile sense of pride that keeps him going during the bad times but topples him in the good. Indeed, Johnson uses the rejection of the mother in an almost modern psychological way, and this helps us warm to Savage and understand him. A romanticised view of Savage - as he probably would have liked.

As described by Johnson, Savage is a fascinating man, one who makes friends almost as easily as he loses them. Who can whether great hardship without complaint, but blows up when people try to help him. Who can live on no money, sleeping rough and borrowing from people but can take a year’s worth of wages and blow it in a couple of weeks. Someone who can write incisively and clearly, but lives in a permanently delusive state. All these contradictions are supported in the book by Johnson’s clear and convincing psychological portrait of a man who lives almost completely for the present, and so is happy as long as his present needs are met, and who can waste money in no time.
The story of Savage’s life, after the birth and pointless attempts to win into the family is interrupted by a brawl, where he is convicted for murder. A conviction turned over by Queen Caroline. Savage then passes from friend to friend, using them up and spitting them out. Splitting with his biggest patron because he abused the facilities, and generally being a nuisance, a pest and very good company. Savage then applied for the post of Laureate, apparently being the King’s preference but losing out to our old friend Colley Cibber. Savage then styled himself as ‘Volunteer Laureate’ to the Queen and receives £50 a year from her. He also receives the sniffly response from Cibber that ‘he may as well styled himself Volunteer Duke or Volunteer Lord’. When the Queen died, the money stopped and Savage was sponsored to go to Wales and live frugally. This didn’t work and he died in a debtor’s prison in Bristol.
He seems a strange kind of person for Johnson to write about, even stranger that they were friends. Savage was a dissolute, sponging man filled with pride, who was better at writing about virtue than living it but there was something about Savage’s ability to carry on cheerfully and regardless that seems to hugely impress the neurotic Johnson. Maybe it’s as simple as the answer Boswell received explaining Johnson’s friendship with Dr Levett, “He is poor and honest which is recommendation enough.”

For a very short book, I had a lot of thoughts, I recommend it to anyone who fancies a rollercoaster ride. I recommend ‘The Bastard’ also.
Yours