I was going to call this post, ‘What I did on my Easter Holidays’ because I have done rather a lot. The first week was spent in Poland. There I ate cheaply; drank wodka, learnt how to throw axes, visited a pinball warehouse, Jagiellonian University,  Wawel Castle - and went to Auschwitz. I don’t want to talk about Auschwitz.

The second week, I caught a sudden flu and, wrestling my way out of bed, went to three historic houses. 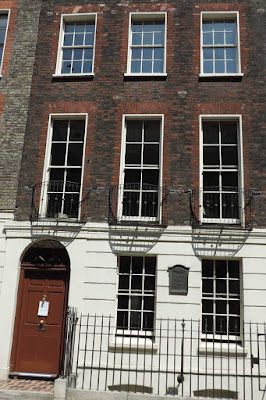 The first was Benjamin Franklin House, an eighteenth century townhouse tucked down the side of Charing Cross Station where Franklin lived for sixteen years and is the only Franklin residence in existence in the world. They haven’t got much else though. With the exception of a purse, a letter and a pile of poorly anatomised bones found in the garden, they have nothing. The rooms are painted a sickly green that Franklin had his rooms painted in, some fireplaces…and some audiovisual equipment.

Because there is nothing in the house to look at, there’s a show. The show consists of a bewigged woman, playing Molly, the landlady’s daughter. She interacts with projected sound and vision of people like Peter Coyote and Imelda Staunton playing Benjamin Franklin and the landlady, Mrs Stevenson. The show is a prime piece of Philly cheese steak. The actress (who we didn’t get to thank) put her all into an extraordinarily difficult kind of performance, where she was trapped in a succession of rooms with eight people, acting and reacting to piped in voices in her, and our, heads.

To give the audio-visual exhibition its due, it did pack in a lot of information about Benjamin Franklin, firmly establish many of his claims to fame and explain what he was doing in London, and how it all fall apart eventually. And as I said, the actress did a good a job in a strange situation, and I was a little moved at the end.

People wishing to go to the museum should know that it is only during these audio-visual tours and they happen on the hour (except Mondays, when it’s a tour of the empty building).

The volunteers who ‘welcomed’ me in, were terse and rattled off their words in quick, bored, spurts. I felt like I had put them out turning up ten minutes before a performance.

Next was a hop-skip and jump up to Handel and Hendrix in London, aka Handel/Hendrix House.

I slipped in from the courtyard, was given a place to put my bags and told I could spend as long going up the stairs and back and forth as I wished as there was no set route. The bottom rooms contained a spinet (an early organ) and two harpsichords as well as a great many pictures. I saw a Hogarth I had never seen before; a portrait of Rich, the owner of the Lincoln’s Inn theatre, as well as a great many images of Vauxhall Gardens. A couple of the rooms had Handel music to listen to but the ones that didn’t, had volunteers.

The volunteers at the Handel/Hendrix House were the secret weapon. Many of the rooms had little to show but a handful of objects (many of them reconstructions) and images -  but the volunteers had warmth and character and stories. I learnt that Handel was accused, probably wrongly, of sneaking out and having a sneaky nice wine instead of sharing it. I also got to have a chat about castrati, soprano wars (Handel preferred Faustina) and Handel’s personal preference for cherrywood and plum material.

This favouring of plum material and cherrywood was something I learnt by talking to the volunteer in the bedroom. She also taught me what a tester bed is - it’s one where the curtains are hung from the ceiling and not from a four-post. The room next to it showed a reconstruction of Handel’s banyan - a type of luxurious casual gown. Handel would have liked wearing one, because as well as being a stout person, he was a tall one, over six-foot. (Though I reckon Johnson still could have had him in a fight.) Also - I want a banyan.

There was also that staple of the historic house museum - dressing up. As fun as it is donning a nice frock on my visits to Dr Johnson’s House, at the Handel/Hendrix House the clothes inspired by both Handel and Hendrix. I had great joy in creating my own Jimmy Handel-rix monstrosity.

Upstairs, in the flat next door, lives the attic of Jimmy Hendrix. Similar to the Handel House, there was a suite of rooms playing music to give the background and then access into the main bed/sitting room, which only had one piece of original furniture but the rest recreated carefully from photos and interviews. It was a warm, comfy place, like the ultimate student gaff. The volunteer again was very interesting, telling me about how the room was used and pointing out just how many ashtrays there were.

I also took away a list of Hendrix’s record collection. It was great to know he had a Bonzo album, an Acker Bilk and a Frank Zappa. He was also into electrified Chicago bluesmen like Muddy Waters and (my fave) Howlin’ Wolf. 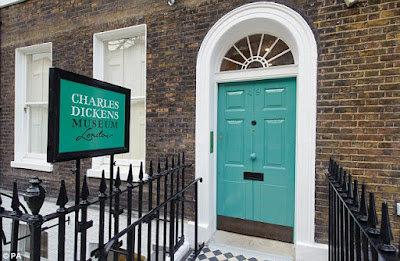 I also went to Dickens house. This was where Charles Dickens wrote his early novels, though most of the furniture comes from a later Dickens house - his dream home in Kent.

What this means is that unlike the other two historic houses, there are a great many objects linked to Dickens and his work in the house. As well as early drafts of novels; near priceless instalments from the major novels, the desk on which Dickens wrote, the window from which little Charles Dickens bemoaned his life as a bootblack worker and the bars which his dad (and Mr Micawber) were kept behind for debt. For a massive Dickens fan, there are enough relics to make a visit essential (and stand, much as I stood in Lichfield with a lump in my throat at Johnson’s writing board).

Dickens house also paints an interesting picture of Dickens. There is a set of clothes, showing his slim, short figure. There’s a mirror with a description of Dickens practising the faces and voices for his characters and his personally designed speaking desk with a reading copy marked up by Dickens to help him perform it. While his… ‘complicated’ personal life is touched on, his energy and enthusiasm make him seem like good company.

I was also delighted that one of his favourite authors was Oliver Goldsmith, and he had a personally bound life of Goldsmith. He was also a great fan of Smollett and Fielding, and had Hogarth prints throughout the house - I liked him more for this.

The last thing Dickens House focuses on, is the way the young, upwardly moving household was managed in the nineteenth century. The kitchens and wash house are very interesting - and I would love to take the kids next time I’m forced to do Victorians.

The Dickens House also had a volunteer per floor, one of which was very friendly but the others very clearly didn’t want to be talked to. Oddly, both the person at the pay-desk and the one who talked to me, both told me they found Dickens' work a bit of a chore.


Ultimately, a historic house museum relies on what you bring to it; a diehard Dickensian will adore the Dickens house and a Franklin fanatic will thrill to walk the halls of their great philosopher - but in and of itself, the Handel/Hendrix House won me over because of the joy of the volunteers that brought the two very different personalities together.