Review: The Autobiography of Benjamin Franklin 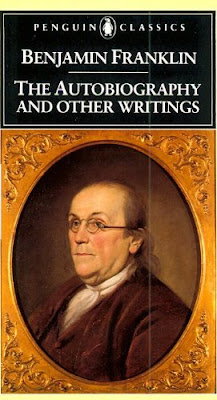 I know Hamilton is the cool founding father of the US, but I was always more interested in Franklin.

I knew a little of his achievements by osmosis; I knew he’d proved lightning to be electricity and created rods to protect buildings; that he’d invented a hauntingly strange musical instrument, that he’d drafted the declaration of independence and constitution and also written a book on farts. I was aware that he was integral in getting French help in the American rebellion, he was a member of the Lunar Society and once lost a chess match to Kempelen’s Turk.

I didn’t know I was only scratching the surface.

They broadly tell the story of how an impoverished runaway became a newspaperman, gained in influence as a projector of good causes and became a trusted and vital part of colonial infrastructure - and as a bonus, he also was given a gold medal and membership to the Royal Society for work on electricity.

I was expecting a man full of energy, interests and unquenchable spirit for life like Erasmus Darwin. I found a stiff, prudish, puritanical prig stuffed on pious platitudes. There’s not a tired phrase Franklin doesn’t cling to, a person he doesn’t meet who he deplores for drinking - a man who scolds himself for a fondness for puns and describes his only interest, reading, as something that ‘debauched me from my work’.

Franklin also has this peculiar anti-interest in food. He is extremely proud of his indifference to food and is a vegetarian for a while and like many vegetarians, he feels the need to tell people he is one. I’m with Samuel Johnson that ‘He who does not mind his belly, will hardly mind anything else.’

To be fair to him, he did work hard - but he also made sure everyone knew he was working hard, ensuring he was the one who wheelbarrowed paper from the supplier so everyone could see. This hard work set the foundation for all he was going to achieve and could be used as inspiration if I didn’t find him a little cold.

It’s a subtext, but Franklin is very ready to drop friends when they aren’t of any use to him, even grabbing one annoying man by the crotch and throwing him in a river. He has a club called the Junta but when they want to expand the operation, he won’t allow it except in secret, to prevent useless people joining.

At one point he considered setting up his own deistic religion, dedicated to worshipping his teachings. These teachings were of 13 virtues and an elaborate system of trying to live up to those virtues, focussing on one a week and making marks when the others weren’t achieved. I simply can’t trust a man who thinks that people can be perfect-able, and appears to think he has got rather close to it - except perhaps humility, the 13th and most reluctant virtue.

Still, the man did get things done. His Junto (Aka BF and his BFFs) pooled their books together and set up a library, which became a pattern for libraries across the country. He also set up volunteer fire associations, a militia, a university, decent paving and street lighting - and all manner of good things. As clammy as I find Franklin in the book, he was a person of great achievement.

I didn’t hate this book, but I was surprised that I didn’t love the writer.

That the mostly Quaker council of Philadelphia, being forced to send money to another colony to buy gunpowder but unable for pacifist reasons, managed to pass the law with the following sophistry; that it could send ‘wheat and other grains’.

And that when London printers took the first day of the week off to sleep away the hangover of a busy weekend, it was called worshipping St Monday.